Airplay in the conference room

Many Apple fans know the joy of sharing videos, music, and photos at get-togethers with friends, by “Airplaying” them from their iPads and iPhones to an HDTV via an Apple TV box. Now, this phenomenon is starting to show up in corporate conference rooms.

What’s the first word that pops into your head when you imagine a conference room presentation? That’s right: powerpoint.

The typical Powerpoint-based meeting goes like this: Janet kicks it off, running through her Powerpoint deck with her laptop tethered to the conference room’s video projector. Then Harold transfers the projector’s video cable to his laptop and shows his slides; and so on. Or perhaps the presenters get together in advance, and merge their slides into a single Powerpoint deck and pass around one laptop.

That’s so late-90s. Change is in the wind, though, thanks to some cool new gear and capabilities from Apple. And the result may augur a new era of Apple penetrating enterprise conference rooms.

What’s AirPlay all about?

Basically, AirPlay is an Apple-proprietary protocol for streaming audio, video, and graphics from one device to another. Using AirPlay, an iPad or iPhone running iOS 4.3 or later can wirelessly stream content to an HDTV via an Apple TV box (pictured on the right).

AirPlay currently supports three modes of sending content to the HDTV and its associated sound system using an Apple TV as the receiving device:

Incidentally, AirPlay’s screen-mirroring and dual-screen modes are only available when an iPad or iPhone 4S (or later) is being used as the AirPlay source.

Which iOS apps work with AirPlay?

Consequently, you can project the output of virtually any iPad or iPhone app onto the wall of a conference room for sharing. Some of the many possibilities include…

Recognizing this trend, business intelligence (BI) software specialist MicroStrategy has just integrated enhanced AirPlay support into MicroStrategy Mobile, its mobile BI app. The goal, according to the company, was to help customers “drill deep into data and present insights in real time” and present those results on-the-fly during meetings.

“They can now go to meetings armed with data on their iPad, share it using Apple TV, and have spontaneous conversations with dynamic insights — replacing the static Powerpoints that now dominate boardrooms,” explains Hugh Owen, Director of Mobile Products. Owen likens MicroStrategy Mobile, with its new AirPlay enhancements, to a sort of “Powerpoint on steroids.” 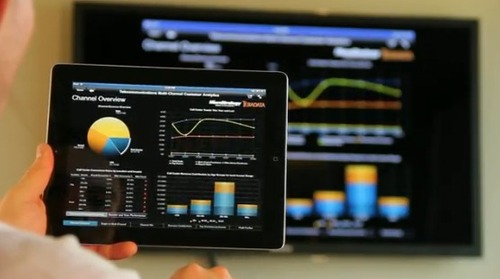 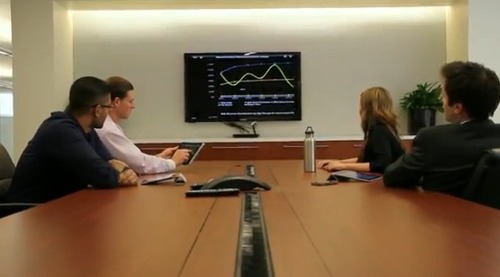 MicroStrategy’s AirPlay-enhanced apps let you use pinch-to-zoom on the iPad’s screen to focus on a specific region of the screen. For example, if the iPad is currently displaying four different graphs, you might want to zoom-in on one of them to drive home a point.

The recently-updated iPhone version of MicroStrategy’s mobile app leverages AirPlay’s dual-display capabilities. According to Owen, “while viewing Visual Insight analyses, we present the visualization output on the external mirrored screen, while displaying the visual insight controls on the iPhone.” The visualizations are shown within their panels over AirPlay, and the user can swipe on the iPhone to move between panels; pinch on the iPhone to zoom on the big screen; or hold their finger to use the app’s laser pointer function, he explains.

Overall, being able to select specific datasets and graph the results on-the-fly raises the art of presentations to a whole new level. “It’s a great way to visualize and share insights into data,” says Owen.

“This new integration with AirPlay and Apple TV is an important extension to our existing capabilities. Once you’ve built a business intelligence app that an executive can carry around throughout the day, it becomes very compelling for the executive to be able to show the information to the person next to them. It’s even more exciting to have the ability to walk into a conference room and throw it up on the wall and show off the information in that setting.”

Apple in the enterprise

“It’s an interesting story just around how Apple is penetrating the enterprise,” adds Owen. “You look back prior to the iPad, and Apple really didn’t have a foothold in many businesses unless it was specific to the graphic design department.”

“Now with the iPad, suddenly Apple’s got control of almost every executive who has available power and resources, and they’ve supplied them a device they can rely on and are comfortable using, to the point where they’re able to get information directly on the device instead of having to go to their executive assistant to ask for reports to be run.”

“And now, following the iPad through door into the conference room are things like the Apple TV — consumer devices that are really very compelling business tools as well.”

For its part, MicroStrategy has equipped all of its conference rooms with Apple TVs. “This allows the company to have much more spontaneous meetings, compared with the old days when people gathered around a static PowerPoint,” adds Owen.

For more information regarding MicroStrategy’s mobile BI software, including free versions of both the device apps and the server software, visit the company’s website. The company’s updated iPad and iPhone apps are available from Apple’s iTunes App Store.


7 responses to “Airplay in the conference room”