Two startups are about to go “chrono y chrono” with competing Android smartwatch gizmos. The “I’m Watch” exclusively targets smartwatch applications, whereas the “WIMM Platform” is meant to create “a new market of connected wearable devices that deliver timely, relevant information at a glance” — of which smartwatches are but one example.

The Italian-designed “I’m Watch” (pictured below) will be positioned as a smartphone accessory for those wanting to keep tabs on incoming emails, texts, social network posts, and more, while leaving their smartphones discretely stowed in their pockets or purses.

Notably, the Android 1.6-based I’m Watch device does not include WiFi. Instead, it’s tethered via Bluetooth to the associated smartphone, which in turn provides the required data path to and from an I’m Watch webservice (see concept architecture diagram below). 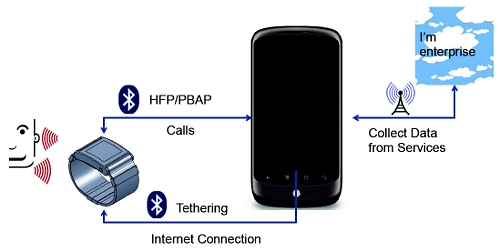 The I’m Watch will be packaged in an assortment of materials and colors, and marketed by I’m Watch partner Blue Sky as a stylish, state-of-the-art personal accessory for the continuously-connected guy or gal who has virtually everything.

Si24 expects to introduce an upgraded design with more memory and a faster processor next year. Additionally, the company will entertain opportunities to license its technology to other companies, for incorporation into various customized wearable devices.

Silicon Valley-based WIMM Labs emphasizes that its Android 2.1-powered “WIMM Platform” is much more than just a smartwatch. Rather, it’s a programmable building-block intended to serve as the core of a diverse set of connected wearable devices.

In addition to wrist-worn applications similar to what’s implemented by the I’m Watch, WIMM Labs sees its WIMM Platform as destined for wearable applications that have yet to be invented by the company’s customers. Accordingly, production units of the module will be devoid of WIMM branding.

The “WIMM Platform” is aimed at more than smartwatch apps

In contrast to the I’m Watch, which is designed to serve as a smartphone companion, the WIMM Platform is capable of completely standalone operation by virtue of its built-in WiFi radio. However, WIMM’s module can also make use of being tethered to a smartphone for certain purposes, according to the company. Possibilities appear to include sharing the phone’s cellular data service, displaying caller ID information, sending incoming calls to voicemail, previewing SMS and text messages, and more.

WIMM stresses that its design is highly optimized for extending battery life, with the goal of eventually going 48 hours without a recharge — it does 24 hours now, according to the company. In order to maximize battery life, the device’s ARM11 application processor remains in standby mode most of the time, and is awakened once a minute to sync-up with online data such as email, social network posts, and other data associated with installed apps. WiFi, too, is kept turned off when not needed.

An ultra-low-power microcontroller runs all the time, however, in order to keep the module’s wristwatch-style time and display current and for other housekeeping requirements.

Comparison of features and specs

The table below compares and contrasts the key features and specs of these two highly-mobile Android gizmos.

The I’m Watch will be offered in a range of materials and colors, with pricing starting at 299 Euros (currently about $425). Further details are available on the watch’s website. The device was designed by Si14 and will be marketed by Blue Sky, both located in Italy. A development kit will be available for use in developing apps to run on the device.

Further details regarding the WIMM Platform, including several software and accessory development kits, are available from the WIMM Labs website. Interested developers can obtain a $299 “WIMM One Developer Preview Kit,” which comprises a WIMM Platform module, a smartwatch carrier (module holder mounted on a wristband), and unspecified support documentation.

Note: Subsequent to this post’s publication, WIMM entered into an exclusive, confidential arrangement with an undisclosed party that may have acquired its technology. Consequently, WIMM’s device is no longer available for purchase on its website. The WIMM website states: “We’d like to thank all of our developers for their interest and willingness to experiment with our platform and look forward to exciting advances in the wearable market.” Eventually, the purchaser of WIMM was identified as Google.