Like many advanced technology projects, eLegs is based on technology developed by a U.S. military R&D program. The military has been working on exoskeleton technologies in order to help its soldiers hike longer and faster while carrying heavier loads. The PBS video shows Amanda Boxtel, who lost her ability to walk as a result of a skiing accident, demonstrating her ability to walk using eLegs, which was developed by Berkeley Bionics.

“…I would love to be able to have the run mode working,” says Boxtel in the video. “And I would — they wouldn’t be able to catch me. I would run out of this building and keep going.”

The video also interviews Dean Kamen, who demonstrates “Luke,” an artificial arm and hand (the name comes from Star Wars). This project, which is intended to be a replacement arm for amputees, is also based on research funded by the U.S. military. 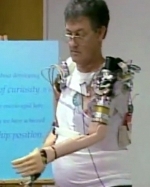 The artificial arm is attached to the amputee using “breakthrough surgery called targeted muscle reinnervation, pioneered … at the Rehabilitation Institute of Chicago by Dr. Todd Kuiken,” says the PBS video. The video shows Jesse Sullivan, the first person to get the surgery, demonstrating the artificial arm.

“The signal is sent down and a piece of the chest muscle contracts,” explains Kuiken, “When the chest muscle contracts, it emits a little bit of electricity called an EMG signal. And we can record that with little antennas or electrodes over the muscle…. The key thing is to be able to control even what we have got. No one has made wrist flexors until recently because we never had a way to control them.”

The video also showcases research at the University of Pittsburgh, in which a monkey feeds himself using an artificial arm.

Human trials of similar technology are underway at Brown University, the video reports. “We envision that this technology will one day go to a point where we will rewire people and cause it — and allow them to have their brain signals hooked back up to their body, controlling their own muscles,” says John Donoghue, who leads Brown University’s “BrainGate” study.

The PBS video also demonstrates a pair of specialized glasses that can provide a degree of bionic eyesight for the visually impaired. “A camera in the glasses gathers the image,” explains the video. “It gets fed into a small computer, which sends a wireless signal to tiny electrodes implanted on the retina. They stimulate the remaining nerve cells, sending the visual images to the brain.”

Finally, the video shows some prosthetic limbs that are so advanced that South African sprinter Oscar Pistorius “faces accusations he has an unfair advantage as he petitions to compete in the 2012 Olympics.”

A complete transcript of the PBS video is available here.

One response to “Bionic body parts offer hope to the disabled”