Boxee announced today that it is adding Netflix video downloads — including the ability to browse Netflix’s media library from within Boxee — to its A/V media center platform for Linux, Mac, and (soon) Windows PCs.

I’ve been alpha-testing Boxee’s media center platform on my Ubuntu-based Black Tower desktop PC for several months now. Boxee is great for streaming movies and TV episodes from Comedy Central, Youtube, Hulu, etc., and for enjoying A/V content located on your PC or other local source.

A few screenshots showing Boxee running on the Black Tower, which currently runs Ubuntu 8.10, appear below.

Here, courtesy of Boxee, are some screenshots of Netflix running on the new version of Boxee (click each image for a larger view): 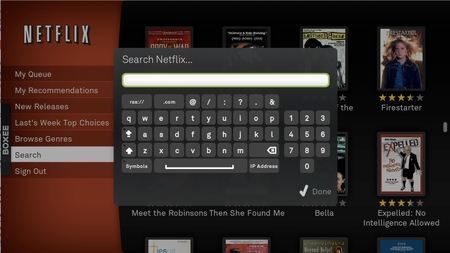 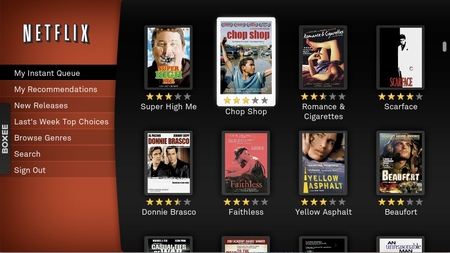 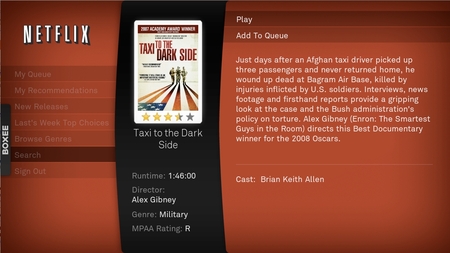 Boxee as an A/V STB framework?

Boxee’s user interface (UI) is both clean and intuitive, and satisfies the 10-foot UI experience requirements of family-room multimedia access set-top boxes (STBs). These capabilities, along with its compatibility with Linux, make Boxee an attractive A/V UI framework candidate for Internet-enabled STBs such as Roku’s (depicted at right) and Syabas’s devices.

However, one feature Boxee lacked was support for one or more well-stocked video-on-demand (VOD) services, such as those offered by Netflix, Amazon, and Blockbuster. Thankfully, Boxee’s new Netflix instant-downloads support starts to fill that gap, and other VOD services can be expected to be added in the future.

Boxee provides its eponymously-named media center software as a free download, and there are no monthly fees for its use.

At this time, the software is only available in alpha form, by request. Sign up on the company’s website and then expect an invitation to download the software within a few weeks. Boxee versions are currently available for Ubuntu Linux, Mac OS X, and AppleTV, and a version for Windows is due out later this month.

As mentioned above, the new Netflix VOD support reportedly is already released for Mac OS X, and is expected to be available for Ubuntu Linux “early next year,” according to a source on the Boxee team. Presumably it will also be included in the soon-to-be-released Windows version.

In an email correspondence, Boxee said support for Netflix instant-downloads on the AppleTV version of Boxee “is our #1 priority right now as we’re working to overcome the hardware limitations of the AppleTV.” That begs the question: would Steve Jobs really tolerate such an assault on Apple’s pay-per-view revenue stream?