Boxee Box users will soon be able to play live broadcast TV channels, with the addition of an inexpensive USB HDTV-tuner dongle. “Boxee Live TV” will be supported by a Boxee Box v1.5 software update.

About a week ago Gigaom.com exploited a “back-door” into Boxee’s website, downloaded and installed the unreleased v1.5 update on its Boxee Box, and created a short video (provided later in this post) demonstrating the new firmware’s updated user interface and configuration settings for supporting live broadcast HDTV playing. (Incidentally, Boxee told our sister site, BoxeeBoxTips that the back-door on its website has now been closed.)

In a post on Boxee’s blog today, CEO Avner Ronen revealed details about the upcoming “Boxee Live TV” option. As expected, it will allow D-Link Boxee Box users to watch live, broadcast HDTV transmitted via ATSC in the U.S. It will also work with an unencrypted cable connection (using ClearQAM).

The capability requires adding a small live-HDTV USB adapter (pictured below), available from Boxee’s website. Initially it will only work on the D-Link Boxee Box — not on PCs and Macs running Boxee’s free, media-streaming software platform. And it only supports users in the U.S. and Canada, for now. 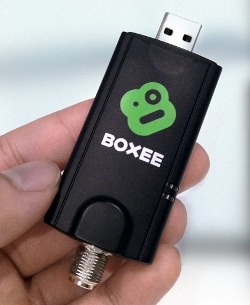 The $49 Boxee Live TV product includes a small “portable” HDTV antenna, which shouldn’t be expected to be sufficient in many installations, according to Boxee. “For users without a strong over-the-air signal, we recommend a roof-top antenna or a basic cable package (usually free with a Cable Internet),” says the company.

What about DVR capabilities? As Boxee says in the Boxee Live TV FAQ (see below), “No. The focus of Boxee Live TV is well… Live TV….” However, the company adds this teaser: “Having said that, if we get enough users asking for DVR then we could take advantage of that other USB input on the back of the box and let a user connect a drive for recordings.” Hmmm….

Click the image below to view Gigaom’s short video showing various live HDTV-related features of the unreleased v1.5 Boxee Box firmware (due for release in January).

Note: This story was originally published on Nov. 9, 2011 based on rumors and speculation, and was updated Nov. 16, 2011 when Boxee CEO Avner Ronen announced details of Boxee Live TV in a post on Boxee’s blog.