Boxee released the second major update to the D-Link Boxee Box’s firmware today. The new v1.1 release adds a variety of content channels for both movies and shows, enhances the device’s browser functionality, improves the consistency of its user interface, and squashes numerous bugs.

The new firmware (numbered 1.1.0.19036) will be pushed out to users’ Boxee Boxes gradually over the next 48 hours, according to Boxee VP of marketing Andrew Kippen. While there will be numerous mostly unseen fixes, changes, and enhancements under the hood, here’s a run-down of the more noticeable improvements…

One quibble I had with the Boxee Box prior to this release was the difficulty of sorting out free or ad-supported movies and shows, from among the thousands of Vudu’s PPV titles that populate the Movies and Shows areas and are returned in a search. That issue largely goes a way now, thanks to v1.1’s greatly expanded availability of content provider Channels for movies and shows.

Currently, the Boxee Box’s Channels include:

Notably missing is a Netflix channel, nor is it included in the search function; instead, you have to run the Boxee Box’s Netflix app. Also, Crackle’s movies aren’t available through a Crackle movie channel, in contrast to the Roku player’s Crackle video channel, which offers both shows and movies. And the Boxee Box still lacks Hulu Plus and Amazon VOD.

Despite the greater orientation toward channels, however, movies and shows can still be viewed as one long list, sorted alphabetically or by popularity. In addition, you can always use Search to find what you want. Plus, you’ve got the Apps menu, which currently offers 189 apps grouped in video, music, and photos categories.

If all that leaves you feeling breathless, you’re not alone!

The Boxee browser has been made considerably more useful, thanks to the addition of favorites, history, and an enhanced on-screen display (OSD), as seen in the screenshots below. 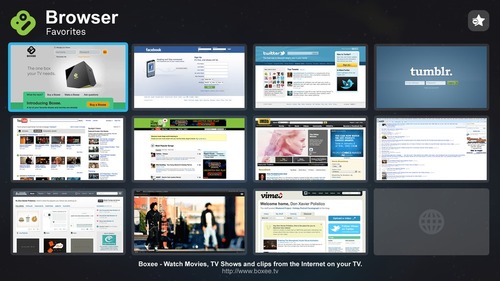 Of note, videos viewed in the browser no longer automatically go to fullscreen mode. This was done in order to support an enhanced web playback OSD, which, according to Boxee, lets you see a bit more of what’s going on in the background, and frees up some room for various UI components to be positioned below the content area. The screenshot below shows the new web-playback UI in action. 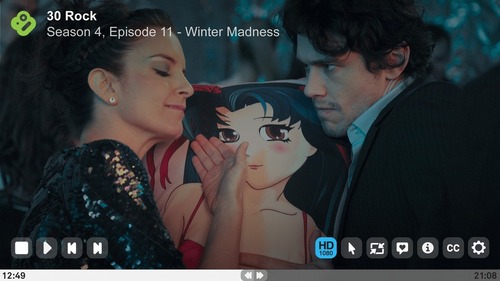 
Boxee points out that the revamped OSD includes a new seek bar, which offers precise rewinding and fast-forwarding, along with minimized button count for greater ease-of-use.

On the down side, the previous ability to adjust volume on the Boxee Box using its remote control in some, but not all, apps has been eliminated. This change was made in order to improve consistency across the wide range of apps supported on the device, says Boxee. 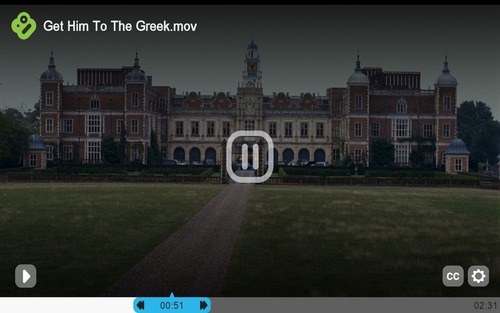 
Another area of enhancement is the addition of support for HFS formatted drives, seek functionality inside music playback, and the ability to filter local files by source.

“We’ve spent a lot of time discussing internally and have decided to create a more consistent experience by removing features that work inconsistently,” explains Boxee marketing VP Andrew Kippon. “While it might not instantly be apparent, over the next few versions we will streamline the interface so that everything works the same, no matter whether you’re in an HTML 5 app, a normal web page, playing a movie file, or watching video from inside an application.”

For more details on what’s new in the version 1.1.0.19036 update read the complete release notes.

Below are various sets of screenshots showing the Boxee Box’s updated menu system, apps, settings, and more. For additional screenshots on the device’s Netflix, Vudu, Pandora, and Weather apps, refer to our prior review based on the v1.0 firmware.

Movies also are found in an expanded set of channels…

Find out what’s up with the weather…

With the v1.1 firmware update, the Boxee Box has come a long way since its widely criticized initial release last Fall.

The new features and capabilities of the browser and web-streamed video OSD are welcome enhancements, as are the efforts to optimize UI consistency across the wide range of apps that run on the device. Add to that the new release’s expanded use of “channels” for accessing movies and shows, and the device has suddenly become a lot more user-friendly.

Looking back at the conclusion of my review of the Boxee Box running February’s v1.0 firmware release, I would recast my Boxee/Roku comparison as follows…

In summary, I think the Boxee Box has come a long way toward meeting its initial goals. It combines a dazzling range of movies and shows (free, ad-supported, and PPV), virtually unlimited browser-based access to web content (assuming the required CODECs are available), and the ability to render content located on attached media or local network shares.

If you’re looking for a device with simple, appliance-like operation and a highly consistent UI, the Roku player (or a Blu-Ray drive with built-in Netflix, YouTube, Amazon VOD, etc.) might be your best bet, especially considering its low cost of entry. But if you don’t mind a few rough edges and a bit of a learning curve, the Boxee Box offers a universe of possibilities, with many available now and many more to come.

Further information on Boxee’s free, A/V-streaming platform for OS X, Windows and Linux PCs, and the AppleTV STB is available on Boxee’s website. For details on Roku’s alternative, go here.

You might also want to visit the new Boxee Box Tips website (DeviceGuru’s sibling). The site was created to help Boxee Box users get the most from their devices, by providing quick-and-easy access to the web’s best Boxee Box apps, how-to’s, resources, and tweaks. You might even win a Boxee Box.