Boxee Box users who enjoy staying on the bleeding edge of features and functions can now download and install beta v1.5 firmware on their devices, by following a fairly straightforward procedure.

Boxee Box users are likely to be pleasantly surprised by the makeover of the device’s user interface, a bit of which is evident in the homescreen photo below. 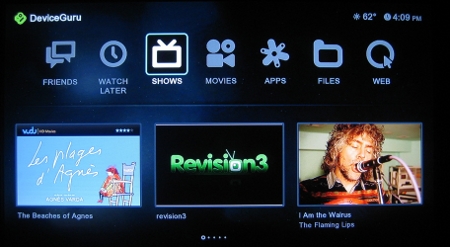 Here’s a quick overview of some of the new features in the version 1.5 firmware for the Boxee Box.

Numerous other new features and enhancements have been incorporated into the v1.5 beta release. Here’s a brief outline, extracted from the release notes:

Release notes and instructions for installing the beta firmware

Read the complete v1.5.0.23422 beta release notes for more details, including information on how to download and install it on your Boxee Box. Note that the release notes caution users that “reverting from version 1.5.0 to version 1.2.2 requires factory restoring of the Boxee Box.” Also note that you will need to rename the downloaded firmware ISO file to “boxee.iso” before installing it on the Boxee Box.

For those preferring to hold off until v1.5 is fully baked, be patient and within a few weeks your Boxee Box should inform you that a new firmware version is ready to install. At that point, you’ll simply need to respond to the prompt in order to initiate the device’s automatic update process.

To see more of what’s new and different as a result of the version 1.5 firmware update, check out our comprehensive Boxee Box v1.5 Screenshot Tour, which accompanies our Updated Boxee Box Review based on its v1.5 firmware. The screenshot tour includes about 150 screenshots showcasing the Boxee Box’s menu system, extensive suite of multimedia apps, movies and shows selection process, Watch Later feature, and more.