Boxee has finally released an iPad app. Although it lacks some bells and whistles, such as Boxee Box remote control capabilities, the initial version of the free “Boxee for iPad” app is already a real winner!

Boxee for iPad is beneficial to Boxee users, with or without a Boxee Box. It’s also useful as a standalone app for those iPad users who’ve never used Boxee, since it’s fully capable of playing a wide range of video content streamed from multiple sources, both local and remote.

In its current state, the Boxee for iPad app lets you play videos directly on the iPad, streamed from local or remote sources. You can also transfer them from your iPad to a running Boxee Box, where they instantly begin to play the big screen. 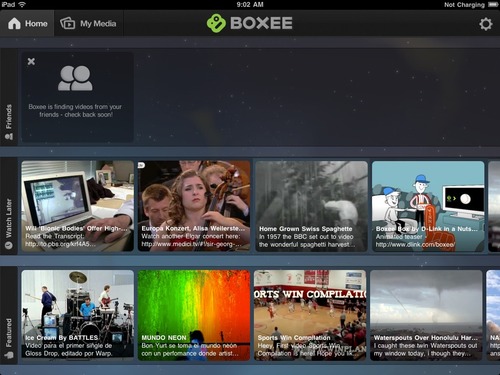 
As seen in the above screenshot, Boxee for iPad provides four video stream channels:

Check out the first set of screenshots below, for a sense of how Boxee for iPad works.

To enable the Boxee for iPad app to play videos streamed “in almost any format” from Macs and Windows PCs, Boxee has also just released a free, lightweight, media server app for users to install on their desktop systems. “No need to hours converting and syncing videos to your iPad,” says Boxee.

Incidentally, you only need to install the media manager app if you want to stream videos from your Mac or Windows PC. Otherwise, Boxee for iPad works fine standalone, thanks to its Friends, Watch Later, and Featured content channels. To begin building your Watch Later playlist, all you need to do is install the Watch Later bookmarklet in your desktop or laptop system’s web browser and use it to add videos to your queue.

Further details on the Boxee Media Manager are on Boxee’s zendesk support site.

As another part of today’s multipronged release, Boxee has updated the Watch Later bookmarklet for Windows, Linux, OS X, and iOS systems and devices. So, whether you’re a Boxee guru or newbie, be sure to grab the latest bookmarklet here.

These screenshots show the new Watch Later bookmarklet in action on an iPad 2:

Although it’s not listed, we couldn’t resist attempting to install the new Watch Later bookmarklet on the Android Browser of our Galaxy Tab 10.1 tablet running Android 3.1 (aka “honeycomb”). Guess what? It works!

Using the Watch Later bookmarklet on a Galaxy Tab 10.1
(click thumbnails to enlarge)

For more on installing the Watch Later bookmarklet on Android, check out the second set of screenshots, below.

As though the introduction of the first Boxee iPad app, a lightweight Windows/Mac media server, and an updated bookmarklet weren’t enough, Boxee also released a new version of firmware for the D-Link Boxee Box today.

The Boxee v1.2 update, which began arriving on Boxee Boxes this morning, includes the following new features and enhancements, according to Boxee:

These screenshots demonstrate many of the features of the Boxee for iPad app:

These screenshots show the process of installing a Watch Later bookmarklet on the Galaxy Tab 10.1 running Android 3.1 (honeycomb) along with Samsung’s August 2011 firmware update:

Installing and using the Watch Later applet on Android 3.1
(click thumbnails to enlarge)

[This post was initially published on DeviceGuru’s sibling site, BoxeeBoxTips.com]