Cooler AMD CPUs turn up the heat on Atom

Given their fanless capabilities, you can expect to these new APUs to start popping up in A/V-streaming consumer devices such as the Boxee Box, Google TV boxes, Roku players, connected TVs, and Blu-ray players

Key characteristics of the two new parts are listed in the table below. As indicated, the T40E is a dual-core chip with dual on-chip L2 caches, and is rated for 6.4W TDP (thermal design power). The T40R, meanwhile, has one 64-bit core accompanied by one L2 cache, and features 5.5W TDP.

Both new, sub-7W TDP APUs are currently being designed into fanless embedded systems, adds AMD. The photo below shows a single-board-computer in the Qseven form-factor, powered by AMD’s new T40x G-Series Processor. Made by Datakamp, the tiny SBC plugs SODIMM-style into a connector on an embedded system mainboard. 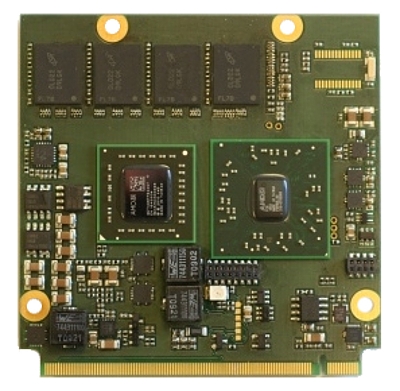 
When AMD introduced the Embedded G-Series earlier this year, it cited analyst data sizing the embedded processor market at $3 billion annually in 2010, and predicting it to grow at double-digit rates for at least each of the next five years. Typical applications are expected to include “graphics-intensive solutions like digital signage, internet-ready set top boxes, mobile and desktop thin clients, casino gaming machines, point-of-sale kiosks, and small form-factor PCs,” as well as numerous single-board computers such as the one pictured above.

AMD’s Embedded G-Series platform chipset is implemented in the form of a pair of low-power, ball-grid-array components — the G-Series APU plus an I/O Controller Hub:

The block diagrams below show the partitioning of functions between the two Embedded G-Series platform components (click each image to view a larger version). 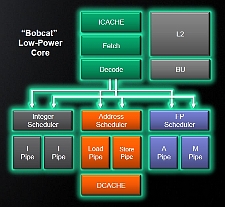 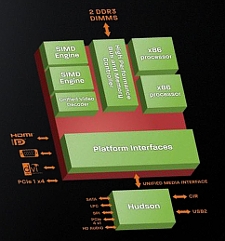 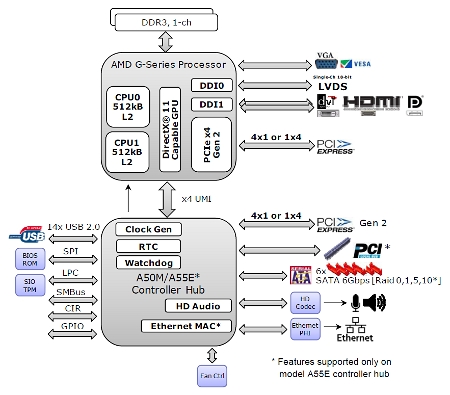 The key features of the Embedded G-Series APU, as listed by AMD, are…

Despite AMD’s initial positioning of the G-Series as combining CPU and GPU functionality on a single chip, the company subsequently introduced a triad of GPU-less APUs targeting cost-sensitive headless applications. The T48L, T30L, and T24L integrate one or two 64-bit CPU cores spec out at 18W and 5W TDP, for the 1.4GHz and 1.0GHz models, respectively.

We’ve assembled a much more detailed set of Embedded G-Series platform features and specs in this detailed list.

Find out more about the AMD Embedded G-Series APUs in our earlier highly-detailed coverage, which includes benchmarks comparing the G-Series to Intel’s Atom along with some AMD GPU history.