Although Apple’s and Roku’s streaming media players are the darlings of “cordcutters” seeking freedom from cable TV costs and restrictions right now, several other companies are angling for a slice of that rapidly emerging market pie. This review takes a look at D-Link’s most recent streaming player, the DSM-312 MovieNite Plus.

The MovieNite Plus is considerably more conservative and lower-cost than D-Link’s earlier market entry, the iconic Boxee Box (pictured on the right). In contrast, the DSM-312 is meant to go mono-y-mono with the simpler — yet immensely successful — Roku 2 devices. And, as you’ll see, it compares quite favorably.

Like Roku’s players, the MovieNite Plus features a highly intuitive 10-foot user interface, comes standard with a wide range of TV-formatted apps, includes both wired and wireless communications, is compact and power-efficient, and fits comfortably within Roku’s sub-$100 price umbrella. 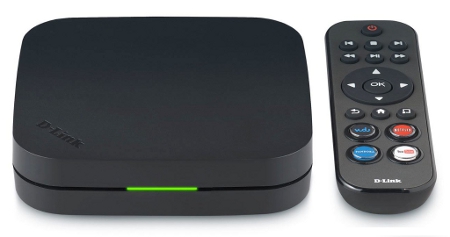 MovieNite Plus and its remote control
(click image to enlarge)

Speaking of power, the device consumes a modest 2-3W when active, as measured by our “Kill A Watt” meter, and drops to roughly 0W when you press the remote control’s red on/off button. Best of all, pressing the power button again brings it back to life fast enough to encourage users to “do the right thing” for the environment.

Features and Specs: MovieNite Plus vs Roku 2

What’s playing on the MovieNite Plus?

The MovieNite Plus currently comes equipped with 99 TV-formatted channels and apps for quick-and-easy video, audio, and podcast streaming, plus the promise of new apps on an ongoing basis, via firmware upgrades pushed out to users’ devices. In particular, D-Link says it plans to add a Hulu Plus app soon.

The sections below provide an overview of the apps that are currently available on the device.

Currently, six featured apps — Netflix, Vudu HD, YouTube, Pandora, Picassa, and AcuWeather — are included directly on MovieNite Plus’s homescreen, as shown in the screenshots below. Of those, the first four can also be started directly from four dedicated buttons on the device’s remote control.

Additionally, the homescreen includes launchers for the “Vudu Apps” and “MovieNite Apps” sub-menus, which together provide nearly a hundred additional sources of content. One more launcher on the homescreen is for starting the “MyDlink” app, which enables watching video from multiple D-Link remote cameras directly on the TV screen.

The “Vudu Apps” sub-menu, entered from a launcher on the homescreen, currently provides 31 additional video- and audio-streaming apps and podcasts. (Note: these are distinct from the “Vudu HD” video-on-demand channel, which is covered later.)

You can read the names of the current set of Vudu apps by clicking the thumbnails below:

The “MovieNite Apps” sub-menu, also entered from a launcher on the homescreen, currently provides access to an additional set of 61 video-streaming apps. You can read the names of the current set of MovieNite apps by clicking the thumbnails below:

The apps within the MovieNite Apps channel are based on “Fling” technology, and as a result they have a somewhat different user interface style from the other channels and apps on the device.

One particularly interesting app in the MoviewNite Apps area is the “Fling queue” channel, which contains pointers to videos you that you “fling” to the queue from your PC or mobile device.

To fling videos into the queue, you need to add a special Flingo bookmarklet to your desktop or mobile browser or, in the case of Android devices, install the Send2TV Android app. For Android users who’ve installed Send2TV, flinging conveniently becomes one of Android’s “share” options. Currently, Flingo only officially supports videos hosted on YouTube, Vimeo, and CrunchyRoll.

You can see some examples of using Flingo in DeviceGuru’s review of the Netgear NeoTV box, which also provides Flingo queue support. Technical details regarding the open source Flingo technology are available here.

As with the device’s Netflix app, the Vudu HD movies/shows channel is based on Vudu’s standard streaming media player app. Also, like Netflix, Vudu HD is available from the main menu as well as from a dedicated button on the remote control.

The device’s YouTube app makes it easy to access featured videos, videos within various YouTube channels, videos saved to your personal YouTube queue, or videos discovered via keyword searches. Like Netflix and Vudu, YouTube can be launched directly either from the main menu or with a dedicated button on the remote.

The device’s main menu also includes several other featured channels, which currently include Pandora, Picasa, Weather, and the MyDlink remote camera display app. Additionally, D-Link plans to add Hulu Plus to the mix, via an upcoming firmware update to users’ devices “soon.”

Incidentally, although Pandora, like Netflix, Vudu, and YouTube, owns one of the dedicated buttons on the remote, we wouldn’t be surprised to see Hulu Plus commandeer that button in a future release.

So, how does D-Link’s MovieNite Plus compare to the most popular streaming media player devices currently on the market? Here’s a run-down of some of its pros and cons:

In addition to the pros and cons listed above, the following incremental features would be interesting to add in the future, either via firmware updates to the current product or as part of next-generation device designs:

The D-Link model DSM-312 MovieNite Plus streaming media player is currently available from various internet and brick-and-mortar sources, priced at around $80. Additional details may be found on D-Link’s website, here.