Digi International has introduced a Linux-based server packaged within a somewhat elongated RJ45 connector. The ME 9210 comes with an embedded OS based on a Linux 2.6.26 kernel.

Digi claims the ME 9210 to be “the smallest embedded device server available with Linux.” Although the company is targeting the module primarily at data acquisition and control applications — such as PLCs (programmable logic controllers), PDUs (power distribution units), and environmental control equipment — it’s completely general-purpose in function, and should prove popular in numerous other embedded devices. 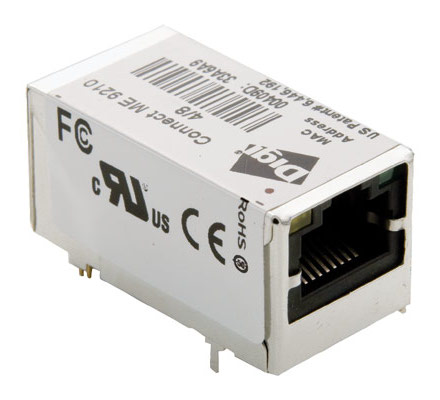 The ME 9210 is based on Digi’s recently-introduced NS9210 system-on-chip, based on a 32-bit ARM926EJ-S core (with MMU) and clocked at 75 MHz. The module also integrates 8MB of RAM and up to 4MB of flash memory. Built-in interfaces include 10/100 Ethernet, a high-speed serial port, SPI and I2C serial interfaces, 10 GPIO lines, and a CAN fieldbus.

The ME 9210 module also provides advanced power management capabilities, and its support for power-over-Ethernet (PoE) enables it to be powered directly through its RJ45 Ethernet connector. It requires 3.3V DC at around 1.1W active and 0.6W standby, and it’s rated for -40 to +85 degrees C operation.

The ME 9210 is expected to begin shipping in December, priced at $48 in quantity (1,000). This includes the embedded Linux OS. A $399 quick start kit will also be available in December; it includes the ME 9210 module, a development board, documentation, a DVD containing the Linux OS and Eclipse-based tools, and a power supply.