ABICAS is enabled by vehicle-to-vehicle (V2V) communications, can warn drivers of imminent side-impact collisions, and can automatically activate the brakes if necessary to avoid or minimize the damage caused by such collisions, says Ford.

According to Ford, the system works in conjunction with radar- and camera-based driver-assist features. For example, it can interact with the adaptive cruise control and collision warning with brake support functions that are available on many of the company’s vehicles.

“While radar and camera sensors can detect other vehicles ahead and behind a vehicle, radio-based wireless sensors give vehicles a 360-degree view,” notes Ford. In addition, dedicated short-range wireless allows vehicles to communicate with each other.

Information from all these sources “is combined with engineering algorithms to ensure the validity of an imminent collision before automatically activating the vehicle’s brakes — all of which happens in a split second,” says the company.

ABICAS builds on knowledge gained from Ford’s ongoing Smart Intersection research project, which focuses on wireless communications between vehicles and intersection infrastructure, according to the company. 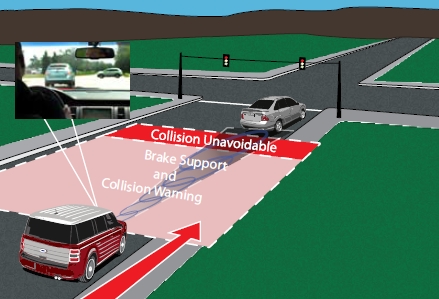 
“Smart Intersections communicate with test vehicles to warn drivers of potential collisions, such as when a vehicle is about to run through a red light,” explains Ford. “The intersection is outfitted with technology that monitors traffic signal status, GPS data, and digital maps to assess potential hazards, and then transmits warning information to other specially equipped vehicles.”

“Once the information is received by the vehicle,” continues Ford, a suitably designed “collision avoidance system can … determine whether the car can safely cross the intersection or if it needs to stop before entering the intersection. If the system determines the need to stop and senses that the driver is not decelerating quickly enough, it issues visual and audible warnings to the driver.”

Mike Shulman, technical leader of Ford’s Active Safety Research and Advanced Engineering, notes that “for vehicle-to-vehicle communications to be effective, common standards will need to be established for all automakers to follow. One of the goals of Ford’s research is to identify the types of warnings that drivers find to be effective and easier to understand, he adds.

Ford also says it is collaborating on a wireless research project with other automakers in Germany, where the government is attempting to mitigate congestion-related traffic safety issues. 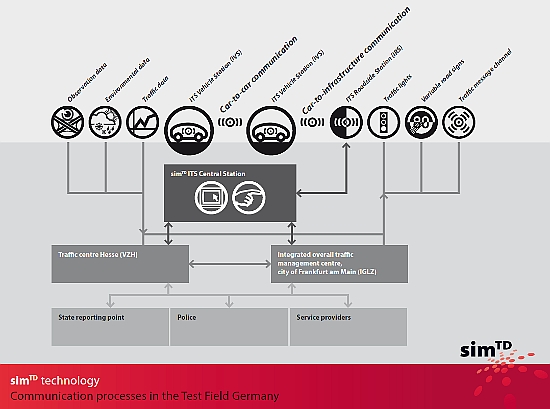 Germany’s “Safe and Intelligent Mobility — Test Field” research project (aka “simTD”) is described by Ford as a 400-vehicle field test “aimed at evaluating the feasibility and scalability of wireless systems in the real world.”

“Deployment of reliable and effective wireless systems can enhance vehicle safety, reduce traffic accidents and ease congestion,” explains Christian Ress, a connectivity technical expert in Ford’s Telematics Research and Advanced Engineering group. “We will bring these systems to market when they have been fully assessed for feasibility, robustness and practicality.”

“Thanks to research projects like ABICAS, tomorrow’s vehicles will one day be able to talk to each other to avoid accidents,” predicts Jim Vondale, director of Ford’s Automotive Safety Office.

Further information regarding the programs discussed above are available from the following resources: