Following a highly successful Kickstarter project and over a year of development, HexBright, billed by its creator as the “world’s first open source Arduino flashlight,” is now in production with initial shipments planned for December.

HexBright, which we discussed here in detail last year, is the brainchild of three-time Battlebots champion Christian Carlberg. It was launched as a Kickstarter project in May of 2011, with the objective of raising $31,000.

“People loved the idea of an open source, Arduino-compatible programmable flashlight,” says Carlberg. In fact, the project’s openness — on both the hardware and software sides — generated so much excitement that it overran its funding goal by 700%, generating over $250,000 in pledges within 45 days. 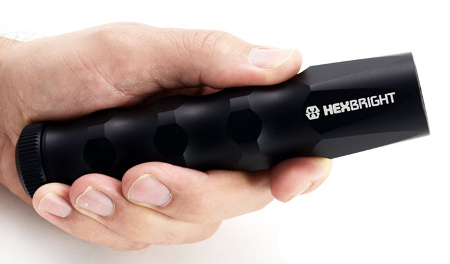 Harnessing the power of open source

“I sat down and started designing a well engineered, powerful, and flexible light,” recalls Carlberg. But unlike a typical corporate R&D developer, he regularly shared his work and progress with the flashlight’s Kickstarter project’s avid followers through online video updates.

“The project’s backers — people who wanted this new flashlight — regularly commented on the updates, so I responded periodically with new video updates,” says Carlberg. “Through this interaction, something unexpected happened: the Kickstarter crowd started contributing to the design. At first it was just ideas and suggestions, but then some people began contacting me directly offering their expertise.”

“With this project, we’ve seen more than just monetary crowd-funding,” observes Carlberg. “We’re seeing crowd-development, too — there’s a lot of valuable knowledge out there in human resources. A good idea can attract and harness that expertise.”

“Initially, the project team was just myself and Terry Cooke, but thanks to the power of online crowd-sourcing we built a larger HexBright team,” adds Carlberg. Gradually, the development team grew to include Boris, a Russian optics expert who designed the lens; Michael, a South African who assisted with graphic design and the creation of marketing materials; Sarumonkee, an electrical engineer in Colorado who took care of diagnostics and testing on all the electronic components; Andrew a software engineer in Colorado who helped develop the embedded software; Cody, an electrical engineer in San Diego who worked on the component layout; and Tim, who designed the HexBright website.

Outside and inside the HexBright Flex
(click each image to enlarge)

These are the Flex’s key features and specs:

“USB plugs are notoriously difficult to seal against the elements,” notes Carlberg. Accordingly, “the design of HexBright’s housing is very clever — it seals the micro-USB female plug inside the body behind an o-ring for protection.” The rugged CNC aluminum housing also acts as an efficient heat sink. Additionally “all the important guts are inside the aluminum ‘carrier,’ making it very easy to replace the outside shell with a different grip and lens while the ‘engine’ stays the same.”

Unlike most flashlights, HexBright contains a programmable embedded microcontroller. The system’s electronics block diagram and schematic appear below. 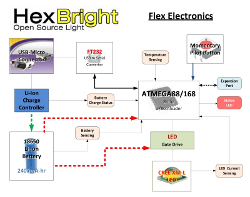 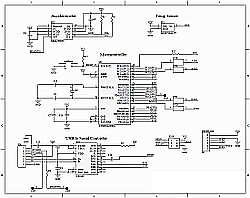 Why would a flashlight need an embedded microcontroller in the first place, and what could you, as a user, do to influence its operation by revising its embedded firmware?

DeviceGuru posed these questions to the HexBright team, and this is what we learned…

Downloading new functions to the HexBright so easy…

HexBright is scheduled to begin shipping in December, priced at $129. However, those wishing to pre-order one now can do so at the introductory price of $99. For further information visit the project’s website, at HexBright.com.

Future plans include offering upgrades to the lights. “I don’t believe we should be a throw-away culture. We can have a flashlight you buy once and upgrade bits and pieces as technology improves over time,” says Carlberg.