Robonaut 2 (aka R2), the first humanoid robot to become a permanent resident of the International Space Station (ISS), was awakened from stasis this week after six months in orbit. R2’s first words? “Those electrons feel GOOD!”

No, really. Although we strongly suspect someone fed R2 that corny line. Actually, with the assistance of the Robonaut ground team R2 has been tweeting for more than a year — even while sleeping!

R2 arrived on the ISS in February, having hitched a ride there on the space shuttle Discovery’s final mission. But due to the astronauts’ hectic schedule of shuttle missions and science experiments, the crew was unable to do more than unpack it until now.

Prior to activating R2, power was applied to its systems for several hours in order to evaluate the integrity of its wiring and connections. The warm-up period also gave the ground team a better understanding of how to operate R2 within the station’s microgravity environment — it turns out, heat buildup and dissipation on the ISS are difficult to replicate on the ground.

“Everything came alive,” reports Robonaut deputy project manager Nic Radford. “We started getting video out of Robonaut’s eyes. Everything worked exactly as we expected it to. It was a very, very exciting time.”

This initial success gives the green light for putting R2 through its first movements in orbit on Sept. 1. At that time, the ground team will send commands for R2 to move its arms and hands. Assuming these and other tests proceed without a hitch, R2 will start assisting the ISS crew with simple tasks in 2012.

Getting to know R2

R2 was developed cooperatively by NASA and General Motors, under an agreement “to develop a robotic assistant that can work alongside humans, whether they are astronauts in space or workers at GM manufacturing plants on Earth.”

R2 weighs 300 pounds and is classified as a prototype. The robot consists of a head and a torso with two arms and two hands. It’s capable of using the same tools space station crew members use, according to NASA. The diagram below indicates R2’s key features and specs (click the image for a larger version). 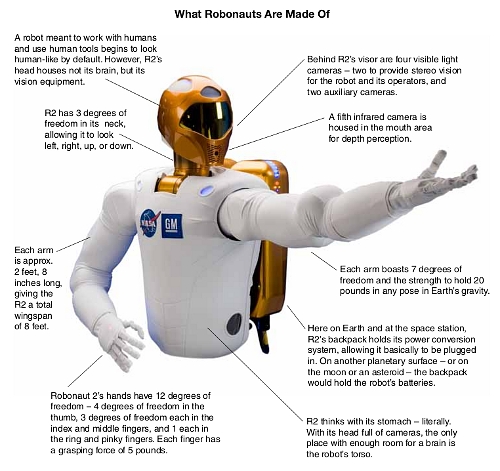 “R2 not only looks like a human but also is designed to work like one,” says NASA.

Check out this lighthearted R2 trailer, produced by NASA:

In its current state, R2 is not adequately protected against temperature extremes and other hostile conditions outside the space station, so it will be confined to operating inside the space station’s Destiny laboratory, where its ability to withstand the ISS’s microgravity, radiation, and electromagnetic interference environments will be evaluated.

R2’s activities in the Destiny lab will also help determine how well robots can work side-by-side with astronauts, adds NASA. Depending on the results of the initial tests in the Destiny lab, R2’s hardware and software may be upgraded to enable it to do new types of tasks.

Regarding NASA’s perspective on the future of robots in space, John Olson, director of NASA’s Exploration Systems Integration Office, says: “This project exemplifies the promise that a future generation of robots can have both in space and on Earth, not as replacements for humans but as companions that can carry out key supporting roles. The combined potential of humans and robots is a perfect example of the sum equaling more than the parts. It will allow us to go farther and achieve more than we can probably even imagine today.”

Additional R2 videos may be found here. Further information on NASA’s Robonaut project is available on the agency’s website, here.