It finally happened: Ubuntu 8.10 (aka “Intrepid Ibex”) has uprooted Kubuntu 8.04 from the Black Tower. Although I’ve been a staunch KDE advocate for many years, this exceptional new distribution — based on Linux 2.6.27, GNOME 2.24, and X.Org 7.4 — has unexpectedly converted me into a GNOME user.

Some key new features and enhancements in the Ubuntu 8.10 release include:


Additional details on what’s new in Ubuntu 8.10 may be found in the new features list and release notes on the Ubuntu.com website.

On learning of Ubuntu 8.10’s release, my initial reaction was to preview it as a live CD on the Black Tower, to see how well it performed. That way I could ensure that everything worked properly before upgrading the system’s KDE-based Kubuntu 8.04 OS to version 8.10.

But then something unexpected happened: I absent-mindedly downloaded Ubuntu 8.10 from Ubuntu.org instead getting Kubuntu 8.10 from Kubuntu.org. Part way through the download, I realized my mistake.

Instead of aborting the download, however, I decided to go ahead and preview standard Ubuntu 8.10 to see what it was like. After all, I’d read numerous comments suggesting that the standard GNOME version of Ubuntu offered superior functional integration to Kubuntu, Ubuntu’s KDE-based sibling. Who knew, maybe I’d like it!

After downloading the Ubuntu 8.10 ISO image file and burning it onto a CD, booted it up as a live CD within a VirtualBox virtual machine on the Black Tower, and checked it out. The screenshots below show what it looked like.

Everything seemed to work properly in the test. In fact, I liked what I saw enough to begin to contemplate doing a clean install of Ubuntu 8.10 (yes, the GNOME version) on the Black Tower.

Fresh from converting a cousin’s two aging Windows 98 PCs (a desktop and a laptop) to my favorite custom Debian/KDE Linux implementation, and having failed to find a single book to help him learn to use such a configuration, I’d already begun wondering whether KDE on Ubuntu — or on any other Debian variant — was too obscure to be well supported.

Combining this concern with what I’ve previously bemoaned as the sorry state of KDE 4, Kubuntu 8.10’s default desktop environment, I resolved to do a “clean install” of Ubuntu 8.10 on the Black Tower — to turn my back on KDE for the present, and give GNOME a whirl.

Installing Ubuntu 8.10 on the Black Tower

Before embarking on a clean install of Ubuntu 8.10 on the system, I performed my usual set of upgrade preparations. These included backing the system up to an external USB drive, and saving critical settings and data in a manner that would allow them to easily be restored following the upgrade.

Ubuntu 8.10 installation wizard in action
(Click each thumbnail to enlarge)

Ubuntu 8.10 installation wizard in action
(Click each thumgnail to enlarge)

Once the installation wizard completed its seven-step process (see above screenshots), a message at the top of the screen prompted me to perform a system update. After I responded affirmatively to that request, half-a-dozen packages (including the Linux kernel) were updated.

After that, a new message offered me the option of installing proprietary Nvidia video drivers in the system to optimize its video performance. I took the system up on this offer as well.

Next, I configured the GNOME desktop to my liking. The screenshot below shows the results. 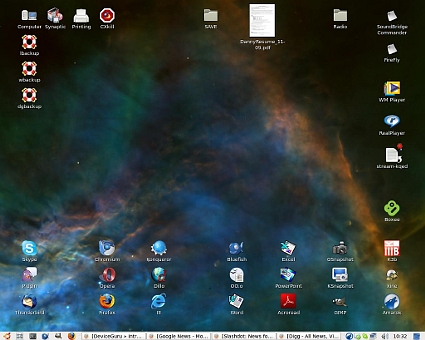 As you can see in the above screenshot, I configured GNOME to have a single panel, at the bottom of the screen, for on-screen control functions and status messages. In contrast, GNOME by default spreads these functions between two panels, with some bits at the top of the screen and the rest at the bottom.

My preferred single-panel configuration, a DeviceGuru.com reader points out, is similar to how KDE does it. Maybe it’s due to using KDE (and before that, Windows) for so many years, but I like finding application-level control functions at the top of the screen (via the application-supplied top panel) and system-level control functions at the bottom (via the desktop manager-supplied bottom panel).

Fortunately, GNOME offers lots of flexibility in the location and contents of the desktop panels. You can even create panels on the right or left sides of the desktop.

Below are two alternative dual-panel desktop configurations I’ve been experimenting with. Each places application and menu icons on one panel, and window selection tabs on another. 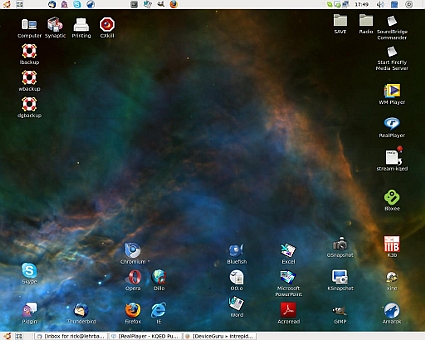 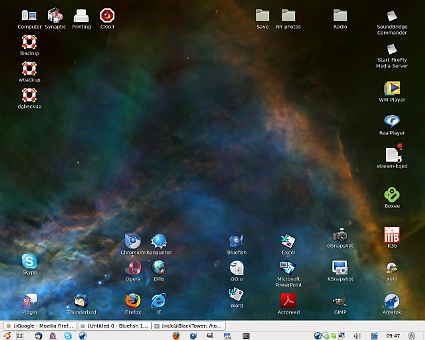 The repositories available to Ubuntu users for free downloading of software offer thousands of applications. Ubuntu 8.10 comes with a very complete basic set of programs preinstalled. To these, I added my favorites.

Before downloading additional software, I modified the repository lists contained in the /etc/apt/sources.list file. From the command line, I used the pico editor (as root) to do this.

The steps I followed were:

I like to do this using the apt-get utility from the command line. You might prefer using Synaptic, pictured below, a user-friendly tool that shows categories of software available and even provides popularity ratings for each program. 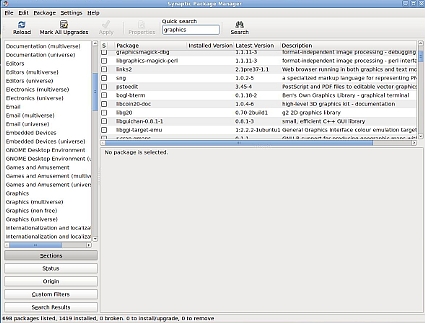 Just about all the software I eventually added to the Black Tower’s Ubuntu OS could be downloaded and installed with the following command:

These packages can also be installed using Synaptic — just search for them using the program’s Search function.

I also like to create a “traditional” linux root user account, instead of having to use “sudo” whenever I have to do an administrative task. It’s easy to do, but I won’t go into that here.

Finally, I performed a series of tests to verify that all key functions were working as desired. These included:

Since the Black Tower doesn’t have a PCMCIA slot, I didn’t test the system’s ability to connect to the Internet over either WiFi or dialup. However, I did verify that both work well under Ubuntu 8.10 on my laptop system, an old-but-loved ThinkPad X20.

Finally, with some trepidation I tested suspend/resume to/from RAM. Thankfully, it worked fine!

Here are a few additional points of interest:

After about a week of heavy use, I find I’m liking Ubuntu 8.10 — with its GNOME 2.24 desktop environment and X.Org 7.4 X Window System — more and more with each passing day.

At this point I can safely say Ubuntu 8.10 is the best-performing Linux distribution I’ve ever used — from the perspective of functionality, usability, and aesthetics. And, much to my surprise, I’m really liking GNOME!


53 responses to “Intrepid Ibex lays claim to the Black Tower”