Myka, which recently began shipping an IPTV set-top box (STB), is offering a $100 discount to entice developers to roll up their sleeves and contribute to its device’s open-source, Linux-based software stack.

Myka positions its eponymously-named “Myka STB” as a BitTorrent client for televisions, and has coined the term “TorrentTV” to characterize this capability.

“The more popular a large video file [is], the faster it can be transferred with BitTorrent,” notes Myka. “The result is quick, easy-to-use, high-quality, video downloads from major studios and content providers without tying up you computer for hours.” 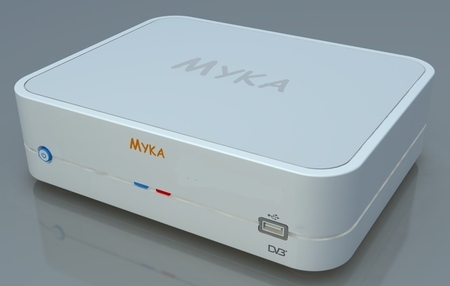 In addition to BitTorrent downloads, the Myka STB will, over time, feature a growing variety of content and download services, “all seamlessly directed right into the TV in your living room without the need for consumers to monkey around with compatibility issues,” Myka says.

The Myka STB features a simple, html-based user interface (UI) that should be easy for developers to modify and extend, according to Myka (a demonstration video appears below).

Myka’s STB includes a web browser, but is not capable of playing FLV files (Adobe’s Flash media format) — hence, no YouTube. However, FLV support is planned for the future, a spokesperson said.

One interesting feature of Myka’s STB is that users can configure its content downloads remotely, via Myka’s website. This partitioned architecture (see diagram, below) makes the STB and its UI simpler and easier to use, claims Myka. 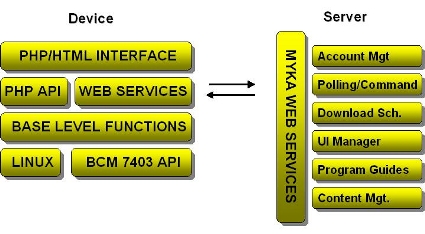 The Myka STB is compact and uses minimal power, according to the company. It’s based on a Broadcom BCM7403 system-on-chip processor and generates HD video at resolutions up to 1080p. As the photo below shows, the device offers a rich variety of A/V connection options.

Myka lists these key features and specs for its STB:

The Myka STBs are expected to ship in “4 to 6 weeks,” according to the company’s website. Prices currently are listed as $279 (80GB), $319 (250GB, and $389 (500GB) depending on the size of the internal hard drive. A special discount of $100 is available for a “developer friendly” model, according to the company. The package includes the Myka STB along, a remote control, cables, a Myka web account, and a “30 day, money back guarantee,” Myka says.

Lots more info can be found on Myka’s website.

One response to “IP-STB maker tempts devs with discount”