Toyota and the University of Tokyo have jointly developed a humanoid robot aimed at household chores. In a demonstration earlier this month, the robot was shown cleaning up a room, clearing dishes from a dining table, and loading shirts into a washing machine, the Japan Times reports.

The robot reportedly is 61 inches (155 cm) tall and weighs 287 pounds (130 kg). It has two arms, five imaging cameras, and laser sensors, and rolls around on wheels. 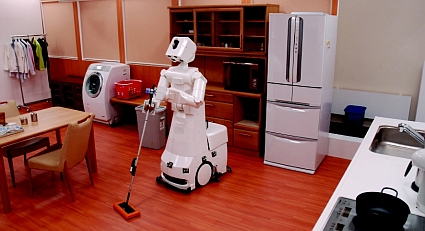 Toyota and the University of Tokyo’s household robot

The device can identify objects such as furniture and cleaning equipment, its developers reportedly said. It’s also said to be able to analyze past failures and modify its behavior accordingly. 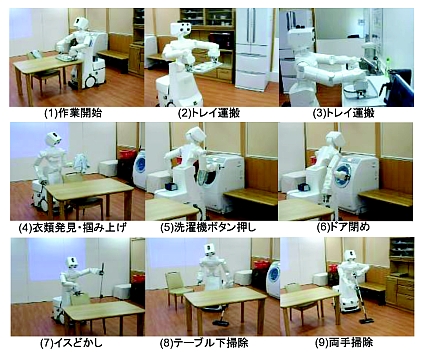 Every household needs one of these!
(Click image to enlarge; source: University of Tokyo)

According to the Japan Times report, the device is intended to “help cope with the predicted labor shortage stemming from Japan’s aging society and low birthrate.”

The robot is still undergoing development and reportedly is expected to reach market in about seven years. The project resulted from a collaboration between Toyota Motor Corp. and the Information and Robot Technology Research Institute of the University of Tokyo.

The brief Japan Times article can be found here.

One response to “Japanese robot helps with housework”