Although Samsung’s thin, lightweight Galaxy Tab 10.1 tablets have dominated the 10-inch Android tablet market for the past year-and-a-half, they’re about to face some stiff competition from new devices from Lenovo and Google.

I spent the past several weeks getting to know Lenovo’s modestly priced IdeaTab S2110, which optionally morphs into an interesting laptop-like hybrid. How does it compare? 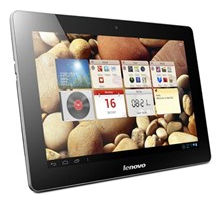 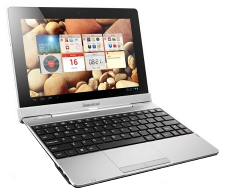 Physically, the IdeaTab S2110 is one of the thinnest, lightest 10-inch tablets available today. It’s also one of the most comfortable to hold, thanks to its textured non-slippery rear surface. Also welcome, are the use of industry-standard micro-USB and micro-HDMI connectors for its USB/power and video interfaces.

The company plans to offer 3G versions of the S2110, but is not ready to announce which wireless carriers will offer it. The higher-priced 3G models will also add AGPS to the tablet’s feature set.

To find out how the IdeaTab S2110 stacks up against Samsung’s Galaxy Tab 2 10.1 and Galaxy Note 10.1 tablets, and Google’s upcoming Nexus 10 device, we tabulated all four 10-inch tablets’ key specs.

As seen in the above table, the IdeaTab S2110 and Galaxy Tab 2 10.1 run neck-and-neck from a features and specs perspective. Here’s a quick assessment of their relative strengths…

Clearly, there’s much in favor of either of those modestly priced 10-inch tablets! Let’s take a deeper look at what the S2110 can do.

Since the IdeaTab 2110 runs a standard Android 4.0 OS and supports the full set of Google services and Android apps, not much about it is unique from a user interface or software perspective.

The screenshots below show the S2110’s out-of-box user interface, including its default homescreens, apps, widgets, and an unusual widget-based folder function.

The S2110’s default configuration includes a somewhat half-baked, widget-based homescreen folder feature, which you can see in the screenshot repeated at the right (click to enlarge).

This folder function is based on a set of six prenamed folder widgets (Business, Games, Life, Media, Tools, and Social), which you can place on any of the tablet’s homescreens. Each folder widget can hold up to 12 app-launchers of your choice, but there’s no way to rename the folders or create additional ones, and you can’t put bookmarks or other 1×1 widgets in the folders — just app-launchers. All these constraints render it a relatively useless piece of eye candy.

Thankfully, the S2110 also includes the substantially more useful Android 4.x folder function, which is demonstrated in the screenshots below. This one lets you create as many folders as you like, name them any way you want, and load them with up to 48 items, which can be any combination of app-launchers and bookmarks.

Despite the greater flexiblity of the more useful standard Android 4.x folder function shown above, I much prefer a third party folder app, which I’ll demonstrate shortly.

Now let’s take a look at the apps and widgets that come preinstalled on the S2110:

In addition to the usual Google Android apps suite (Mail, Calendar, Contacts, Maps, YouTube, etc.), there are a few nice-to-haves, such as Skype and ES File Explorer, but nothing you can’t easily download yourself from the Google Play Android apps market. One exception is the unlocked version of Documents to Go (a $15 value), with which you can create and edit MS Word-, Excel-, and PowerPoint-compatible files. More about that app, later.

Next stop on our S2110 tour is a quick look at the tablet’s default widget set:

In addition to the large folder widgets, which we’ve already discussed, there are three quick-setting widgets for brightness, WiFi, and Bluetooth, as wall as a fairly typical array of widgets for weather, time, calendar, email, contacts, bookmarks, playing music and videos, and more.

Personally, I’m very sparing in my use of widgets, preferring to configure a single homescreen from which I can launch any app or web-bookmark with one or two taps of the screen. Which brings us to…

As with all Android tablets, you’re free to modify the look, feel, and functionality of the S2110 in many ways without having to resort to “rooting” it (a process akin to “jailbreaking” iOS devices).

After powering up the tablet and going through the initial setup process, the first things I did were to change the tablet’s homescreen wallpaper and add several system tweaking and management apps. The screenshots below show the results of…

These screenshots show the tablet’s customized lockscreen; note the modified wallpaper and the use of Android’s pattern-unlock option:

Now let’s look at the user-installed Folder Organizer app, which provides more extensive features and flexibility than the standard Android 4.x folder function. Using it, you can create customized folders, app launchers, and bookmarks, and assign a custom icon image to each.

My customized S2110 has a single homescreen (shown above), which contains a combination 15 folders, 47 app launchers, and three widgets. This set of screenshots shows the innards of my 15 homescreen folders:

Being a 10-inch tablet, it’s possible to type fairly accurately using the S2110’s standard Android on-screen keyboard. Still, for many users — myself included — typing with an on-screen, virtual keyboard doesn’t begin to approach the efficiency of typing with a physical keyboard.

Although Google Voice Typing works well on the S2110 and can go a long way toward speeding the process of entering large amounts of text, the best way to increase the efficiency of using any tablet for work purposes is to team it up with a decent-quality Bluetooth keyboard.

Accordingly, I tested two popular Bluetooth keyboards with the IdeaTab S2110: the Logitech Android keyboard, and the Zagg ZaggKeys Flex (pictured below). Both worked well.

An intriguing alternative to adding a Bluetooth keyboard, is the IdeaTab S2110’s own optional keyboard/dock accessory, which provides the following added features:

Currently the S2110’s keyboard/dock is only available as part of a tablet bundle, at around a $90 premium compared with buying the tablet alone. Although this makes it an expensive alternative to a normal Bluetooth keyboard, it’s well worth considering if you value the extra features listed above. I’ve used it, and was very impressed with its quality and utility.

On the downside, unlike the Bluetooth keyboards mentioned earlier, which are usable with multiple models of Android and iOS tablets, the S2110’s keyboard/dock is only likely to be usable with the S2110 (and possibly its successors).

Numerous user-installable virtual keyboards can be downloaded from the Android apps market, letting you substitute your favorite keyboard. Let’s take a quick look at two alternatives, as well as the tablet’s option of “voice typing.”

All of the MS Office-style apps I tested worked, to one extent or another, although the features implemented varied widely with some, such as Documents to Go, offering only minimal capabilities. The screenshots below give a few glimpses of these apps running on the S2110.

What else can it do?

Actually, a more appropriate question would be “What can’t it do?”

Without getting swept away with the vastness of all the ways you can enjoy an Android tablet these days, here’s a brief screenshot montage showing some leisure-oriented apps running on the S2110:

For more details, and more than 500 screenshots showing these and numerous other apps running on the Lenovo IdeaTab S2110, have a look at DeviceGuru’s extensive IdeaTab S2110 screenshot tour. You can use the table below for quick access to various categories of screenshots. But don’t forget to return here for this review’s concluding comments.

Lenovo has done a great job with the design of its IdeaTab S2110. The thin, lightweight, moderately priced 10-inch Android tablet is suitable for both work and leisure mobile computing purposes. It competes favorably with Samsung’s Galaxy Tab 2 10.1, providing a 50% faster CPU. Additionally, the optional battery-boosting keyboard/dock accessory morphs it into a laptop-like hybrid device, which you can conveniently snap together and apart to fulfill the need of the moment.

Here’s a quick summary of its main pros and cons:

Overall, I’ve found it to be a pleasure to use! Lenovo’s 10-inch IdeaTab S2110 Android tablet is loaded with features and modestly priced. Plus, an optional battery-boosting keyboard/dock morphs it into a laptop-like hybrid with multiple use-cases.

Further details on the IdeaTab S2110 are available on Lenovo’s website, here. As of this posting, the tablet is available for about $300 (with 16GB flash) on Amazon. Buying it with its optional keyboard/dock, which also double’s the combination’s battery capacity, adds $80-90.