The Linux version of Boxee’s eponymously-named multimedia platform has finally been updated to include several new features introduced into the OS X and Windows versions over the past few months. Key additions include an “App Box” and restored support for Hulu.

Linux Boxee users may be able to upgrade to the new version of Boxee, version 0.9.11.5777M (April 26, 2009 build), by launching the Update Manager tool (Menu > System > Administration > Update Manager) on their Ubuntu systems. If that doesn’t do the trick, you can open up the Synaptic package manager (Menu > System > Administration > Synaptic), search for boxee using the “Quick Search” function, and then reinstall it by right-clicking on the program’s name and marking it for reinstallation. 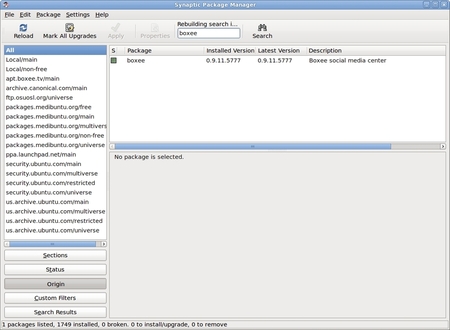 If all else fails, remove the package (right-click and mark for removal) and then install it fresh. Another approach is via apt-get from the command line, using a string of commands such as…

Once updated, Boxee will exhibit an updated skin and a new “App Box” through which new applications, including Hulu feeds and more, can be added. 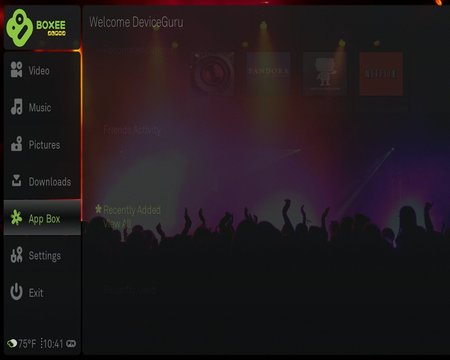 Here are a few more screenshots of the new Boxee version:

As noted above, the latest release restores support for Hulu, which disappeared several months ago. 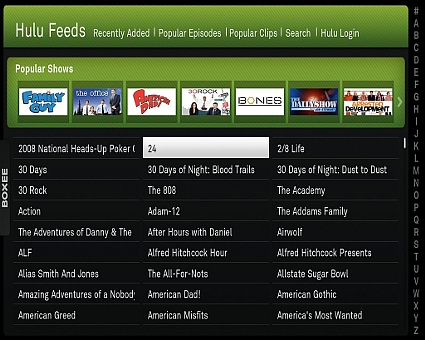 Hulu returns to Boxee, but it’s not as clean as before
(Click image to enlarge)

The new Hulu function is not as clean as the original version, which was more tightely integrated into Boxee’s excellent and easy-to-use 10-foot user interface.

The current support for Hulu, an effort to sidestep Hulu’s content redistribution concerns, leverages Boxee’s RSS feeds in conjunction with a customized mozilla browser engine that’s part of the latest Boxee release. Evidence of this less-integrated approach is seen as Hulu’s home page momentarily flashes on the screen just prior to Hulu’s content menu (shown above) appearing on the screen.

Still lacking in the latest Linux release, however, is the long-awaited addition of Netflix movie and TV show streaming for subscribers to Netflix’s monthly service (with unlimited program streaming available for as little as $10 per month).

Boxee is available for free download from www.Boxee.tv, and is free to use. It’s available in Linux, Windows, Mac OS X, and AppleTV versions.