Inside Mantis: a 2-ton hexapod robot with a Linux brain

The Mantis Hexapod Walking Machine is the creation of Matt Denton, who has been keenly interested in special effects and animatronics for many years. Among his recent accomplishments, Denton supervised “creature performance systems” used to produce numerous animatronic characters in the Harry Potter series (including: Voldemort, Fawkes, Buckbeak, the Hippogriff, the Werewolf, dragons, a hexapod walking creature, and underwater dummies and fish).

In 2008, Denton introduced a small hexapod robot kit though his company, Micromagic Systems. Around the same time, he came up with the idea of building a giant hexapod robot, which could be remotely piloted wirelessly, or driven directly from an on-board seat.

Key features of the Mantis Hexapod Walking Machine include…

Asked about the seemingly slow 1kph top speed, Denton replies, “Yes, pretty slow, however, I have capacity to go faster, we just have some engineering issues to overcome first. To give you some idea of how inefficient walking is though, when we are cruising at 1kph, we are averaging 25kw of power! ” But, he adds, “I’m pretty sure we could double or triple the speed. One thing to bear in mind, when the body is travelling at 1kph, the leg speed during a step is about 4 to 5 kph, each leg weighs about 130kg, so you are constantly accelerating and decelerating 390kg (3 x 130kg) of mass. Now at 2kph you need to double the step speed, so you can see where the problem is… weight!”

Regarding the 18 degrees of freedom, “you can control the body with six degrees of freedom, much the same as a motion simulator — Pitch, Roll, Yaw, Sway, Surge, and Heave — plus of course you can walk in another two axes, based on three controls: Surge (move forwards/backwards), Sway (crab left/right) and Yaw (turn left/right),” he explains.

Naturally, we couldn’t resist finding out more about the Mantis Hexabot’s embedded Linux brain. But before we get into that, have a look at the following entertainingly-dramatic short video demonstrating Mantis in action.

In response to our request for a bit more detail on the giant hexapod’s embedded Linux brain and other electronic innards, Denton obligingly provided the details below.

The Operator Control (OC) box, pictured below, implements a pair of three-axis joysticks, plus 28 buttons for controlling various movements such as gait, etc. 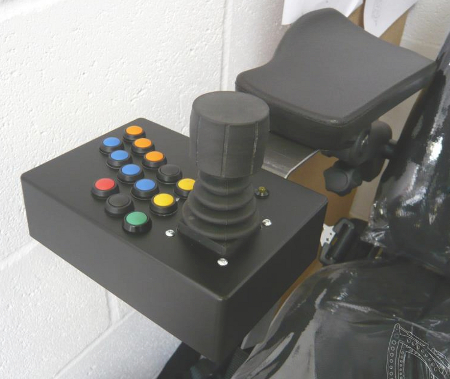 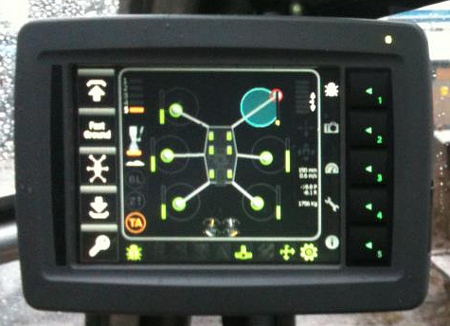 The OI’s 6.5-inch touchscreen display is basically a rugged touch-panel tablet running Windows CE. The display provides a birds-eye view of the Hexapod, showing the state of each of its legs. It also provides screens showing Engine Management, Dashboard, Control Configuration, and Diagnostics status and control functions.

The HexEngine (HE) box contains the HexaPod’s core engine control system. It receives its commands from the OI, and sends feedback to the OI, over Ethernet. It also transmits commands to various other HexaPod systems using Ethernet and WiFi. The HexEngine consists of a three-module PC/104 stack, packaged inside of a rugged Tri-M Cantainer enclosure, as shown below. 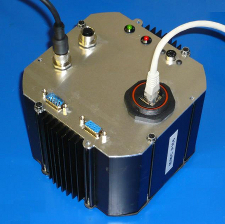 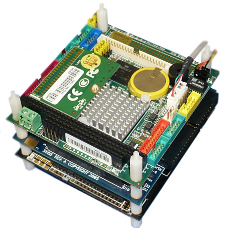 The HexEngine communicates over CANbus with a set of VICE (valve interface & control electronics) modules, which each run up to four PID loops for hydraulic valve control of the HexaPod’s legs. A mixture of CANbus, RS485, and 20mA current loops is used for communicating among the control subsystems, and there are eight analog inputs for gathering data from sensors. The control subsystems include…

In case you’d like to see the whole Mantis Control System in perspective, here’s a block diagram: 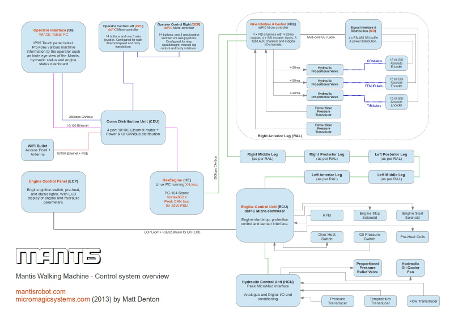 For more information, including lots more photos, visit the Mantis Hexapod Walking Machine’s website, here. The Mantis was the subject of a video broadcast by Canada’s Discover Channel last Fall. You can view a YouTube of it, here.