The NTV300 is an evolutionary upgrade to Netgear’s older NTV200. Like its predecessor, the NTV300 bears an uncanny resemblance to Roku’s popular streaming media players. It’s easy to configure and use, and delivers rock-solid hi-def HDMI video. Additionally, the higher-end models (NTV300S and NTV300SL) provide composite video and stereo audio outputs, making them usable with older TVs. 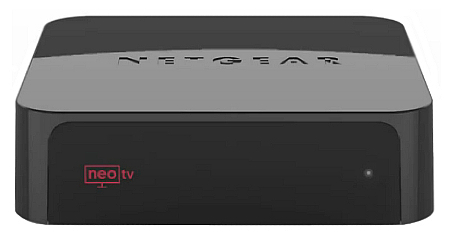 The table below summarizes the key features of Netgear’s NeoTV NTV300 streaming media players, and compares them to the Roku 2 series devices. Noteworthy advantages of each are highlighted in green.

As shown in the table above, although the Roku 2 series players provide more content channels than Netgear’s devices, including the availability of third-party apps, higher-end NTV300 models provide several key capabilities not available from Roku. These include DLNA media streaming and rendering, Intel WiDi display support (similar to Apple’s iPad “screen mirroring”), and QWERTY keys on the rear of the high-end model’s remote. A photo of the NTV300SL’s QWERTY remote appears below. 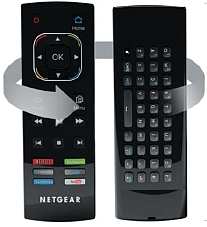 The photo below shows the NTV300SL’s rear panel, which includes power, Ethernet, HDMI A/V, and composite video and audio, plus a microSD card slot. Not shown is the USB socket located on its right side, through which it can stream multimedia from external USB drives. The device’s microSD slot cannot be used as a multimedia source; it’s reserved for other purposes.

The lower-cost NeoTV NTV300S and NTV300 models implement subsets of the NTV300SL’s feature set, as detailed in Table 2, below.

Like the NTV200, the NTV300 series can instantly stream thousands of movies and TV shows from multiple major rental and pay-per-view services, including Netflix, Hulu Plus, and Vudu, as well as from some lesser-known sources such as Cinema Now (an affiliate of Best Buy) and Film Fresh. There are also numerous free and ad-supported channels with movies, TV shows, and other videos. Additionally, the NTV300 includes a YouTube Leanback channel on all models, although the high-end NTV300SL’s QWERTY remote makes searching on YouTube quicker and easier.

Using tabs along the left edge of the device’s homescreen, you can browse the primary channels by popularity or by any of six category sections: Movies & TV; News & Education; Web TV; Music & Photos; Lifestyle; and Games. There’s also a “My Channels” tab, which selects a configurable homescreen filled with user-selected favorite channels. The screenshots below show examples of the popularity, category, and customized “My Channels” screens. For greater detail, refer to our complete NTV300 Screenshot Tour, which is available here. 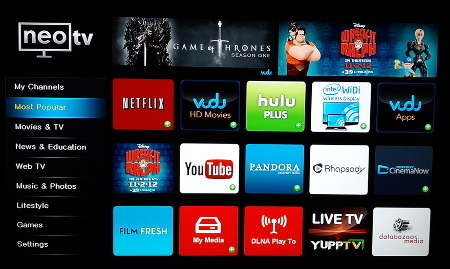 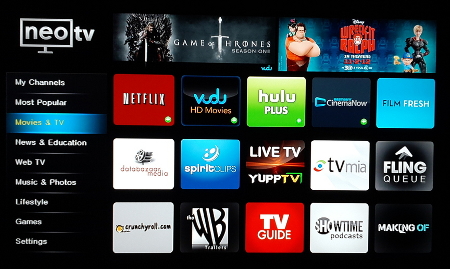 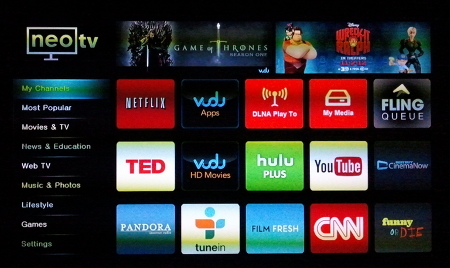 The NTV300’s user-configurable “MyChannels” screen makes it convenient to quickly and easily access your favorite channels when you power up the box or press the remote control’s Home button.

As alluded to earlier, the NTV300’s Vudu Apps channel provides 30 additional content sources, including news reports, TV shows, audio and video podcasts, and more. And like the device’s primary channels function, you can browse the content sources in the Vudu Apps section by category and popularity. The Vudu Apps channel also includes a user-configurable favorites screen, as shown in the example screenshot below. 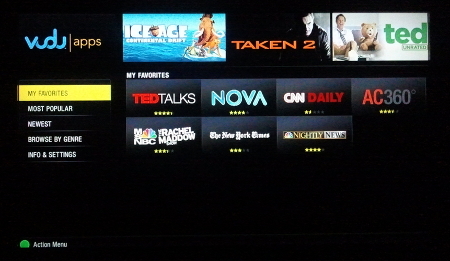 Flinging videos to the NTV300, and playing them on the TV
(click images to enlarge)

Currently, Flingo only supports videos from YouTube, Vimeo, and CrunchyRoll. Flingo is an open source project. To learn more about the technology behind Flingo, visit this page of Flingo’s website. You can see more Flingo screenshots in the Flingo section of our NTV300 Screenshot Tour.

Streaming from DLNA and USB

One significant advantage of Netgear’s high-end NTV300SL device is the inclusion of DLNA support, both for streaming multimedia from “DLNA Media Servers” on the local network, and for acting as a “DLNA Media Renderer” under the control of other DLNA-enabled devices, such as Android tablets. Additionally, the NTV300SL has support for playing multimedia from HDD or flash media connected to its USB port. The screenshots below show us streaming a movie from a DLNA server (a modified PogoPlug device) on our local network.

Streaming multimedia from DLNA and USB
(click images to enlarge)

The NTV300SL also has built-in DLNA Media Renderer functionality, which lets you stream content from a DLNA Media Server to the NTV300SL using a DLNA Control Point (e.g. an Android tablet) to manage the process. An example of doing that appears in our NTV300 Screenshot Tour, here.

The screenshots available through the index below show various aspects of the NTV300’s user interface and many of its most popular content channels. If you prefer, you can access the complete NTV300 screenshot tour here. But please be sure to return here, for a summary of the NTV300’s strengths and weaknesses and other concluding comments.

Here’s DeviceGuru’s assessment of the NTV300 family’s pros and cons:

In conclusion, the NTV300 represents an interesting alternative to Roku, with some useful features and capabilities that are unavailable from the Roku players. For further details, visit Netgear’s streaming media player page.

You might also want to read this site’s smackdown among five prominent streaming media players.