Functionally, the NTV200 is much closer to Roku’s Roku 2 line than to Apple’s Apple TV device. As is the case with both the Roku and Apple streaming media players, the NTV200 is easy to setup and use and delivers rock-solid HDMI A/V signals to HDTVs. 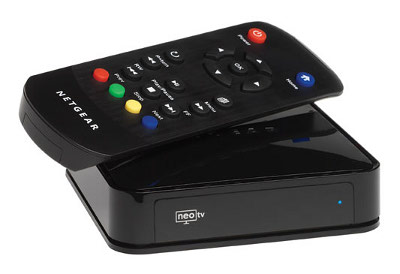 You can see the NTV200’s rear panel connections for Ethernet, HDMI, S/PDIF, and DC power in the photo below.

As expected, the NTV200 can instantly stream thousands of movies and TV shows from multiple major rental and pay-per-view media services, including Netflix, Hulu Plus, and Vudu, as well as from some lesser-known sources such as Cinema Now (an affiliate of Best Buy) and Film Fresh. There are also numerous free and ad-supported channels with movies, TV shows, and other videos, not least of which is YouTube Leanback (which, incidentally, now also offers pay-per-view movies).

Further details on the more-than-200 channels of content available on the Netgear NTV200 appear later in this review.

Given the striking similarity between the NTV200 and Roku streaming media players, we’ve included data on both in the table of features and specifications below.

The NTV200 currently provides a total of 180 content sources. These are grouped into two categories: 100 primary content channels, which are accessed directly from the NTV200’s easy-to-navigate menu system; and 80 additional content sources, accessed through the “Vudu Apps” meta-channel.

You can browse through the NTV200’s 100 primary content channels by popularity or by category, of which there are six: Movies & TV; News & Education; Web TV; Music & Photos; Livestyle; and Games.

The following screenshots show the NTV200’s current set of 100 primary channels, as seen by paging through the menu’s “Most Popular” channels section:

Primary channels, as accessed through the NTV200 menu
(click thumbnails to enlarge)

After you’ve investigated the available channels, you can tag your preferred channels as “favorites,” which places copies of their launch icons in the “MyChannels” home screen. That way, your favorite channels are right there in front of you when turn on the NTV200, or whenever you press the remote control’s Home button.

As noted above, one of the NTV200’s primary channels — Vudu Apps — gives you access to 80 additional content sources, including news reports, TV shows, audio and video podcasts, and more.

The following screenshots show the content sources currently provided by the Vudu Apps meta-channel, as seen by paging through the channel’s “Most Popular” apps section:

Docking favorite channels on the homescreen

Given the 180 content sources offered by the NTV200, you might think it would be awkward or time-consuming to get to the particular channel you want to use at any given time.

Anticipating this issue, the NTV200’s user interface solves this problem in a straightforward manner, similar to browser bookmarks. In contrast to Roku’s one-dimensional menu, where all the apps you have enabled are on one row at the top of the screen and you scroll horizontally though the list to get to what you want to run, the NTV200 has an easily-navigated menu that sorts channels by category and provides one section — “My Channels” — containing user-specified favorites, arranged as desired.

Once you’ve explored the available channels, you can add launchers for your favorite ones to the My Channels homescreen; plus, you can rearrange them there according to your priorities. This process involves locating an app to add, delete, or reposition, and pressing the green, red, or blue buttons on the remote control to add, delete, or move channel launcher icons on the My Channels screen.

The screenshots below show the process of customizing the My Channels homescreen — from the default initial configuration, to a screen of prioritized favorites. You can add as many channels to the homescreen as you wish.

Customizing the My Channels homescreen
(click thumbnails to enlarge)

We all know the feeling of discovering interesting videos — while browsing the web or reading email, Facebook, or Twitter — that we’d love to watch or share on our TVs. Consequently, it’s important for streaming media players to provide an easy way to do this.

In Boxee’s case, for example, you start by adding a Watch Later bookmarklet to your desktop or mobile browser. Then, when spot a video that you’d like to watch on your TV, you click the bookmarklet and the video gets added to your Boxee Box’s Watch Later queue.

The NTV200 has similar feature, Flingo, which also involves adding a bookmarklet to your desktop or mobile browser and “flinging” videos to the NTV200’s Flingo channel for watching on your TV. One exception is the Send2TV app for Android mobile devices; once it’s installed, flinging becomes one of Android’s “share” options, making it as easy to fling a video to your NTV200 as it is to share it via Facebook, Twitter, or Google+.

The screenshots below demonstrate the flinging of videos to the NTV200 three ways: from Firefox on a PC; from Safari on an iPod Touch; and from Send2TV on an Android tablet.

And here we are playing some flung content on our NTV200, using the device’s Flingo channel:

Currently, Flingo only officially supports videos hosted on YouTube, Vimeo, and CrunchyRoll. Flingo is an open source project. To learn more about the technology behind Flingo, visit this page of Flingo’s website.

To give you an idea of what it’s like to use the NTV200 streaming media player, we’ve assembled an extensive screenshot tour in a separate post. You can use the index below to access the screenshots in the tour, or you can jump directly to the complete NTV200 screenshot tour page. But please be sure to return here for the rest of this review, including a run-down of what we like — and don’t like — about Netgear’s NTV200 streaming media player.

This section contains a few additional comments on the operation and functionality of the Netgear NTV200 streaming media player, organized in a compliments-and-complaints breakout.

All-in-all, Netgear’s NTV200 streaming media player is a great choice for those wanting to bring the joys of Internet-streamed music, movies, and TV shows to their TVs. It boasts an easy-to-use menu system, with an efficient way launch favorite channels or browse and select from the complete channels library. The device offers nearly 200 channels of free, ad-supported, and fee-based multimedia and other content, including nearly all the most popular ones, and compares well from a features-and-specifications perspective, and receives periodic updates with new features and channels on an ongoing basis.

How does it compare to Roku’s media players, with which it directly competes? Here’s a quick run-down…

As you can see, they’re fairly closely matched. If you need Ethernet but don’t need USB, the NTV200 might be your best bet. On the other hand, if you care about playing media from USB, Roku’s the way to go; it’s also the only option if your TV can’t use HDMI and requires a composite video connection. And then there’s Vudu on the Netgear but not Amazon VOD; and vice versa.

Additional details on Netgear’s NeoTV NTV200 streaming media player may be found on Netgear’s website. Although we initially listed the NTV200’s price as $60 in our features and specs table, the device currently appears to be selling for about $50 at Amazon.com.