Roku has just refreshed its popular family of streaming media players, adding a model with an enhanced remote control for playing “casual games,” and slashing the devices’ typical power consumption to less than 2 watts. 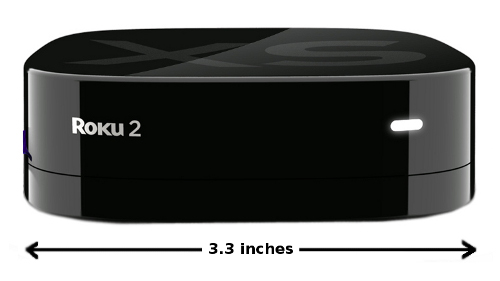 Besides reducing typical power consumption from 6W to “under 2W,” the Roku 2 players are also physically smaller than the earlier models, at 3.3 x 3.3 x 0.9 inches. And like the three-player family it replaces, this new product line comprises three models, whose features are identical except for what’s indicated in the table below.

Suggested retail pricing matches that of the family it replaces: about $60 for HD; $80 for XD; and $100 for the XS. Netflix’s streaming video subscriptions currently run around $8 per month, which covers unlimited streaming.

Roku player users also have nearly 300 other content sources to choose from, claims Roku. These include Amazon’s video-on-demand service, Hulu Plus via a monthly subscription, free movies and shows from Crackle, music streaming from Pandora, and many, many more.

As part of the Roku 2 series introduction, Roku is adding a new capability, which it calls “casual games.” 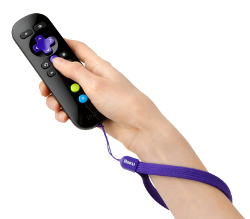 In order to support the hand motions required by games, the company has introduced an enhanced remote control (pictured at right; click to enlarge), which implements RF instead of IR wireless, and integrates a motion sensor. It also includes a hand strap to keep users from accidentally tossing their remotes across the room while launching angry birds at on-screen targets. This new remote is only included with the high-end, “XS” model; the HD and XD models come with IR remotes similar to those of the prior generation players. Both types are pictured below. 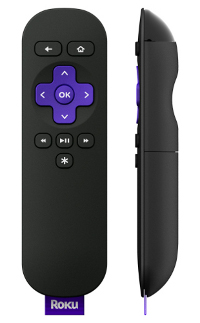 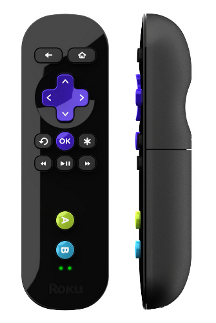 Judging from the “A” and “B” buttons on the enhanced gaming remote, two-person games will be forthcoming, perhaps enabling two participants to compete with each other in real time. Games such as tennis, ping pong, and many more spring to mind.

Incidentally, another benefit of the XS model’s RF remote is that you can hide the device inside an equipment cabinet, without needing to maintain a line-of-sight from the remote to the player. With the HD or XD models, the IR remote control needs to be able to “see” the players’ IR input sensors in order for the remote control to pass commands to the device. Of course, with IR remotes you can always rig up an IR repeater to route the signals into the guts of a cabinet, but that just adds cost and complexity to the setup.

As noted in the features table above, a wired Ethernet port, previously present on all models, is now limited to the high-end model. Additionally, support for component video has been eliminated, with the remaining choices being composite video for up to 480i on all models, and hdmi for up to 720p or 1080p (depending on model, see table above). Additionally, a USB port for external media access, located on the side of the box, is exclusive to the high-end XS player model.

The two photos below show the rear panel layouts on the HD and XD players (upper) and XS player (lower).

In addition to adding a full version of the popular Angry Birds game, the introduction of the Roku 2 players also debuts several new apps. These, according to Roku, include Facebook, EPIX, Major League Soccer, AOL HD, and FOX News. Additional games will be added shortly, with Angry Birds Rio and Angry Birds Seasons leading the pack.

Further details on these new streaming media players may be found on Roku’s website.