Visitors to DeviceGuru over the past week may have noticed an ugly page announcing to the world that “This Account has Exceeded Its CPU Quota,” instead of the desired content.

Unfortunately, our webhosting provider has a nasty policy of pulling the plug — without so much as a warning — on sites that exceed an arbitrary and undefined CPU resource utilization cap.

It all started when DeviceGuru’s recent blog post, “The Boxee Box Cookbook,” attracted loads of attention at Slashdot, LifeHacker, and elsewhere around the blogosphere.

Now DeviceGuru is no stranger to traffic surges from Slashdot and Digg, having been featured on those sites over 20 times in the past year. So, expecting the &%@# to hit the fan on our Boxee Box story, we hastened to activate Elliott Back’s trusty “Digg Defender” WordPress plugin, which normally does a great job of protecting the server we reside on from high loading, by deflecting traffic to the CoralCDN content caching network.

This time, however, rerouting traffic to CoralCDN wasn’t sufficient. On the day The Boxee Box Cookbook was published — despite promises of “unlimited site bandwidth” by HostMonster, our webhosting service provider — visitors were greeted with this lovely page: 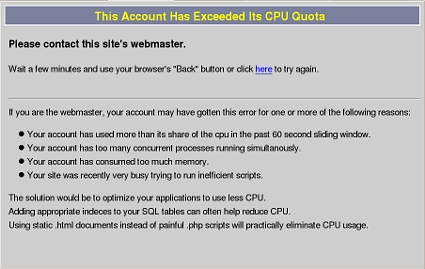 Move along folks, nothing to see here!
(Click image to enlarge)

Even after working hard to reduce the traffic on the site, we discovered the next morning that this ugly gray-and-white page was occupying DeviceGuru.com’s place on the Web: 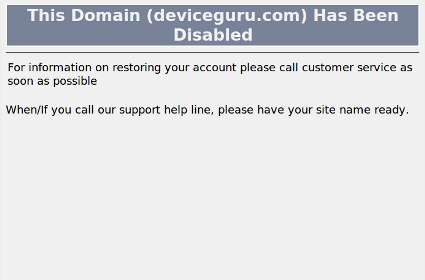 At this point, we couldn’t even login to the site’s web-based control panel or SSH into the server to try to remedy the situation.

Keep in mind that up to this point, HostMonster had never even emailed DeviceGuru about the problem or what they were about to do — they simply arbitrarily shut us down! 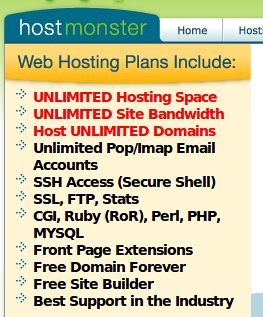 The moral of the story? Be suspicious of sites that entice webmasters and bloggers with promises of “unlimited site bandwidth.”

Ask how they plan to deliver on those promises, review the fine print in their terms of service, and try to determine how you’ll know where your site stands relative to the limits of their “unlimited bandwidth.”

You might, for example, ask: “How much is too much, and how can I know where my site stands relative to your limits?” When I asked that today (when I called to cancel their webhosting service), I was referred to the illuminating answer buried in the fine print of the company’s terms of service.

There, I learned that…

“HostMonster.Com does not set an arbitrary limit or cap on the amount of resources a single Subscriber can use…”

“reserves the right to limit processor time, bandwidth, or processes in cases where it is necessary to prevent negatively impacting other Subscribers.”

In other words the company “reserves the right to limit” the bandwidth of a website to whatever it decides is appropriate, based on current loading conditions, and can periodically disable the site — without warning — to enforce those limits. So much for “unlimited.”

In contrast to HostMonster’s “unlimited-but-limited” bandwidth policies, Hurricane Electric — DeviceGuru’s new home — uses a well-defined formula to calculate each site’s monthly bandwidth, provides continually updated data on how much bandwidth the site has used each month, and offers a means to pay for additional traffic when the need arises. All that for as little as $9.95 per month.

I like that much better than HostMonster’s intellectually dishonest offer of “Unlimited Site Bandwidth.”

I suppose a good rule of thumb might be: never do business with a company that has “monster” in its name 😉

4 responses to “Nightmare on HostMonster Street”