This easy hack can unlock a NEST thermostat’s “Cool” mode in heater-only installations, allowing control of a heater’s ventilation fan as though it’s an A/C.

The Nest Learning Thermostat is a terrific energy saving Linux gizmo, with lots of cool features. I’ve been using one since January of 2016, and have enjoyed its ability to adjust our home’s heating based on an extensive array of time and temperature set-points. One frustration, however, is its inability to control our central heating system’s ventilation fan in a non-heating mode to circulate air in warmer weather using the same scheduling features that the Nest provides for heating or A/C cooling control.

Not all homes have — or even need — air conditioning. For example where I live, in Silicon Valley, our temperatures tend to be moderate throughout the year, with occasional heat waves. Additionally, my house is well insulated by virtue of its wood shake roof, stucco exterior walls, and lathe-and-plaster interior walls. Consequently, in the warmer months we can keep our home comfortable by using the heating system’s ventilation fan to keep the air moving, and in particular, to mix the cooler air from the ground floor into the upstairs areas.

Unfortunately, the Nest thermostat’s support for fan-only operation has no temperature component. Your only choices are to either turn the ventilation fan on and off manually (via a mobile app, desktop browser, or directly at the thermostat), or by means of a “Fan Schedule” that is based on timeframe and minutes per hour, but without regard to the ambient temperature sensed by the Nest. Though arguably useful, the Fan Schedule still requires manual intervention relative to whether the weather requires hourly air circulation — something that I expect a “smart thermostat” to handle as automatically as possible. Why not have temperature-controlled “fan-only” and “heat + fan” modes, similar to the device’s “cool,” “heat,” and “heat + cool” modes?

Of course, you can’t lower your home’s average temperature using air circulation, but in a two-story house a benefit can be gained by circulating the cooler downstairs air through the upper level. Plus, moving air makes you feel cooler, even when it’s just a fan blowing it around in the room you’re in.

Based on the Nest Thermostat’s online documentation, there are three ways to use the device to control your heating system’s ventilation fan independent of heating cycles: 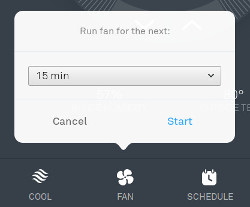 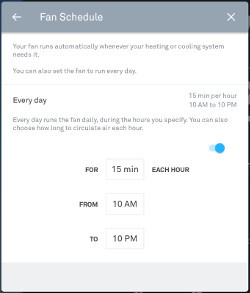 As far as I’m concerned, these options fall far short of what I expect from a “smart” thermostat. Consequently, I embarked on a quest to figure out a way to trick the Nest thermostat into thinking my heating system’s ventilation fan is an air conditioner.

My first step was to investigate the functions of the Nest thermostat’s input and output terminals, as well as the control signals implemented by typical 24VAC-controlled heating systems. The illustration below, adapted from the Nest Pro Installer Guide, shows how the Nest device is normally hooked up to heating-only and heating-plus-cooling systems. 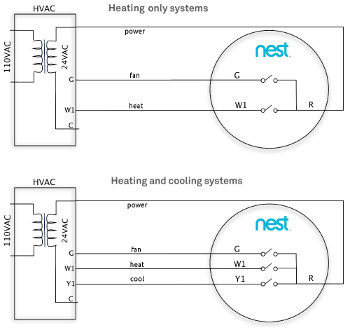 Through some research and experimentation, I hit upon a wiring trick that causes my Nest to control my heating system’s fan the same way it controls an air conditioner’s compressor, using its Cool mode for time and temperature set-points. Note that because this hack connects both the Y1 and G terminals to the fan control (typically green) wire, you can’t use this hack along with an actual air conditioner. On the other hand, if Nest were to implement a dedicated fan-only mode in firmware, the jumper wire would not be needed and a fan-only mode would not preclude the Nest’s standard, A/C-connected Cool mode.

First, a word of caution…

The hack itself is very simple. It consists of a minor tweak to the connections between my home’s heating system and the Nest device. As shown below, all that was required was to connect the green wire (for fan activation power) from my heating system to both the G (“fan”) and Y1 (“cool”) terminals on the back of the Nest. In contrast to the standard Nest wiring shown above, my tweaked wiring is illustrated in the image below:

The figures below show how the Nest thermostat detects — and reports — equipment status based on the HVAC connections it senses. As indicated, the wire colors of interest are red for 24VAC input, white for heater activation, green for fan activation, and white for A/C compressor activation. 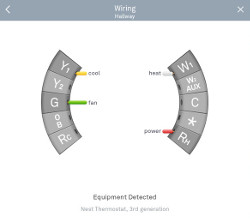 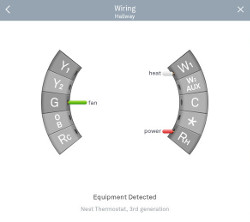 More specifically, without a “yellow” wire connection for controlling an HVAC’s A/C compressor, the Nest thermostat only presents “heating” mode functionality to the user, and thereby only offers the minimal fan-only control capabilities outlined farther above.

With the jumper wire installed, the Nest responds as though it has detected the presence of an air conditioner Compressor control circuit at its Y1 terminal. As a result, the device now presents two additional modes — “Cool” and “Heat + Cool” — in its user interface, and it sends power for activating the heating system’s fan through either (or both) the fan control terminal (G) and the A/C compressor control terminal (Y1). In effect, either or both switches in the Nest could route the same input power that enters the Nest through its R input terminal to the fan control output wire that is connected to both its G and Y1 output terminals. 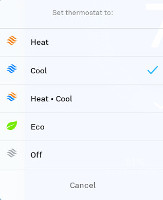 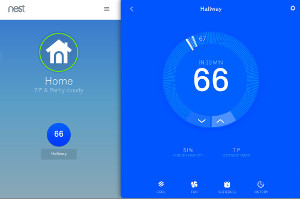 The result is my Nest can now turn my home’s ventilation fan on and off based on Nest temperature set-points, the same way it would control an air conditioner’s compressor. Yet, it can still control the fan as before when it’s in heating mode, including the ability to coexist with the Nest’s “Fan Schedule” function. 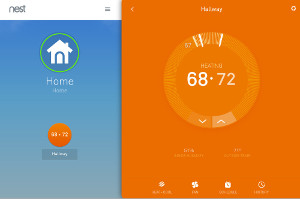 Clearly, an even better fan-only mode could be implemented by a future Nest firmware update. For example, scheduled temperature thresholds could be modulated by a fan duty cycle setting similar to what’s available now in the device’s “Fan Schedule” function. In any case, a temperature controlled fan-only mode like what this hack provides would useful to those who don’t have an air conditioner in their homes, but would like “smarter” fan-only air circulation, without depending on Cloud-based third party services such as IFTTT for something that can be done easily by the Nest device itself.