Researchers at the University of Bath (in England) have created a rolling robot that jumps like a grasshopper to avoid obstacles. The robot’s innovative design circumvents the problems of moving over rough terrain, such as that found on the Moon.

The jumping robot, dubbed “Jollbot,” is the brainchild of PhD student Rhodri Armour and several colleagues at the University of Bath’s Center for Biomimetics & Natural Technologies.

“Robots with legs are generally very complex, expensive to build and control, and encounter problems if they fall over,” according to Armour. “Wheels are a simpler solution to this, but are limited by the size of obstacles they can overcome.”

Previous robots could roll or jump,”but we’ve made the first robot that can do both,” Armour claims. 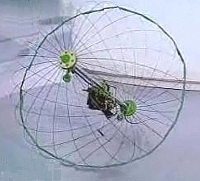 
The Jollbot is constructed in the form of a small, lightweight, flexible, spherical cage. The robot’s innovative design lets it roll in any direction, giving it the maneuverability of wheels, but without the risks of toppling over or getting stuck in potholes.

At less than 1 kg in weight, the robot is relatively immune to damage due to bumping objects or landing after a hop, Armour says. Additionally, he expects it to cost less than conventional exploration robots.

The grasshopper “stores muscle energy in spring-like elements and rapidly releases it to make the jump,” says Armour.

“We’ve made a robot that jumps in a similar way to the grasshopper, but uses electrical motors to slowly store the energy needed to leap in its springy skeleton,” he continues. “Before jumping, the robot squashes its spherical shape. When it is ready, it releases the stored energy all at once to jump to heights of up to half a meter.”

“Future prototypes could include a stretchy skin covered in solar cells on the outside of the robot, so it could power itself, and robotic control sensors to enable it to sense its environment,” he adds.

Further details on Jollbot may be available at the website of the University of Bath’s Center for Biomimetics & Natural Technologies.