A 49-foot-tall replica of Honda’s infamous ASIMO humanoid robot will be a prominent participant in the 2009 Rose Parade. Honda’s float will serve as the parade’s opening ceremony stage and then transform itself into the supersized ASIMO, leading the beloved parade through the streets of Pasadena on New Year’s Day.

Honda says the giant ASIMO replica is about 12 times the size of the actual ASIMO robot. Both are shown in the photos below. 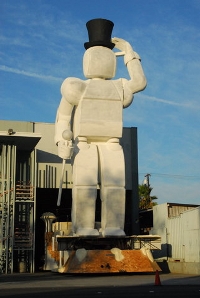 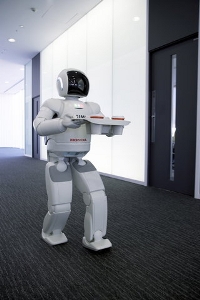 Honda says the actual ASIMO’s size was designed to help it operate comfortably within human living spaces, and to make it “people-friendly.” At 51 inches tall, it can operate light switches and door knobs, and work at tables and other work surfaces. The height of its eyes matches that of a sitting adult, making it easy to communicate with.

The robot’s 34 degrees of freedom of motion help it to walk and perform many tasks in a human-like manner. For example, ASIMO can run, walk, climb stairs, communicate, and recognize people’s voices and faces, according to Honda.

ASIMO is constructed with lightweight materials, including a magnesium alloy structure. Additionally, the robot possesses powerful computing capabilities. Here’s a summary of ASIMO’s key specifications, as listed by Honda:

Here are a couple of videos demonstrating what ASIMO can (and can’t) do:

Earlier this year, ASIMO, joined by cellist Yo-Yo Ma, conducted the Detroit Symphony Orchestra in a performance of “Impossible Dream” as part of a special concert performance for young people.

Further details on ASIMO can be found here.