Suitable Technologies today unveiled a telepresence robot based on “Texai” technology from Willow Garage, a robotics research lab. “Beam” (as in “Beam me up, Scotty” — no, really!) implements a video chat function on a computer you can remotely drive around via Internet-based control.

More precisely, “Beam is a remote presence system that enables individuals to travel instantly to remote locations, using video conferencing on a mobile platform,” according to the company. Its goal to enable a “real, physical sense of presence from Beam that can make professionals in many fields more productive and efficient, while also eliminating travel costs.”

Because you’re not “stuck to a wall or desk,” Suitable adds, Beam becomes “your physical presence anywhere in the world, with the freedom to move and interact with people as if you were there.”

These photos show Beam in action, within a typical target environment:

Beam is not just a robot — it’s a complete system, according to Suitable Technologies. The “Beam Remote Presence System” (RPS) comprises three components:

Beam, like Texai before it, leverages embedded software from the open source Robot Operating System (ROS) framework. To that, Suitable Technologies added proprietary video conferencing software developed specifically for use within the telepresence robot. 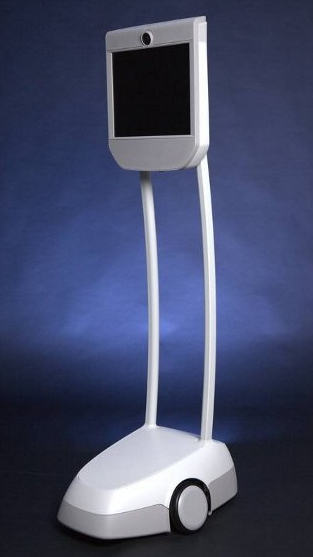 Another interesting aspect of Beam’s design is that its cameras are positioned such that you feel like you’re actually present within the remote location — in particular, they’re not located down at the robot’s base where your feet would be. Additionally, Beam is easy to drive, and its motion simulates a normal walking speed.

The Beam Client app, which is available for both Windows 7 and Mac OS X, connects to the Beam RPD and provides integrated controls for driving, video, and audio. Using the Client app, the Beam pilot can maneuver the RPD directly into the Beam Dock to recharge its batteries, without requiring local intervention.

Beam also adheres to these operational imperatives, which are inherited from the Texai project:

But the big question is: does Beam also adhere to Isaac Asimov’s Three Laws of Robotics? Let’s hope so!

The video below demonstrates Beam’s telepresence capabilities, including (watch for it!) two Beams unexpectedly passing each other in a hallway.

The Beam Remote Presence System will begin shipping in November, priced from $16,000, according to Suitable Technologies. Further information is available on the company’s website. Information on Willow Garage’s Texai technology is available here.