The growing trend toward telecommuting and outsourcing has driven companies to seek ways for remote workers and teams to communicate and collaborate more efficiently and effectively. This need has inspired a handful of innovative high-tech startups to create a new market: remote telepresence robots. Let’s see how their bots compare…

Although remote workers and contractors have depended on real-time audio/video communications tools for many years, including Skype, Facetime, Google Talk, and various dedicated video-conferencing equipment and service, nothing truly offered a “being there” — or better yet, “moving around there” — experience. What was lacking was the ability to work within the remote environment, chatting with managers and staff, attending both scheduled and spontaneous meetings, and solving problems encountered through those interactions. 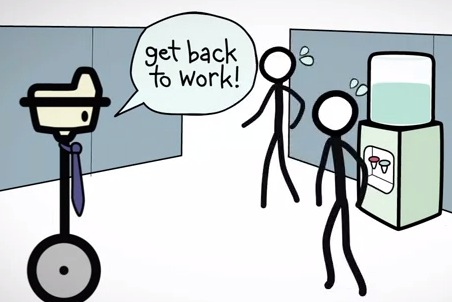 Get back to work!

Several remote telepresence robots have come to market over the past few years, and more are on the way. Shown below are drivable remote telepresence robots from MantaroBot, Vgo, Anybots, and Suitable Technology. A lower cost non-mobile desktop alternative from Revolve Robotics, known as the “Kubi,” is shown at the right. YouTube demo videos of all five appear later in this article.

What’s it like to encounter one of these robotic avatars wandering around your facility, and interact with it? “For all the newness of the Beam, locals often forget they are dealing with a person on an RPD, as opposed to in-person, in as little as 20 minutes,” says Scott Hassan, CEO of Suitable Technologies.

According to Hassan, the Beam’s design features a large LCD display and a minimum of “bells and whistles” that would tend to interfere with natural interactions. “As a result, meetings via Beam lose their novelty pretty quickly and both parties just get down to work.” 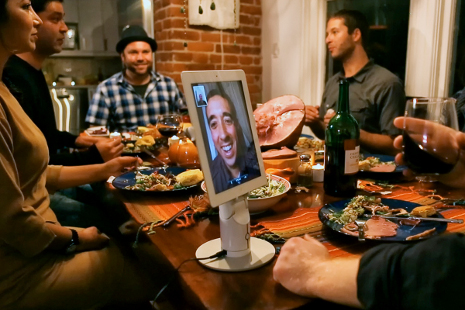 Enjoying lunch with the team

The photos below show the Kubi, VGo, Beam, QB, and TeleMe telepresence devices participating in meetings, rolling down hallways, and interacting with coworkers in various work environments. My favorite is the last one, in which two Beams encounter each other in a hallway and pause for a chat. 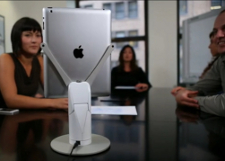 How hard is it to remotely “drive” a telepresence robot? “Having some experience playing video games helps,” says Hassan. “The interface for the Beam’s remote pilot is very simple, and is picked up in a matter of minutes. Based, of course, on a limited sample size, those who are self-described gamers have been up and piloting the Beam in no time at all. The interface is very similar to a first-person shooter, but without the gun.”

The videos below breathe a little more life into the concept of telepresence robots.

Slowly but steadily, mobile telepresence robots are insinuating themselves into our work environments, especially in situations where they provide services that would not otherwise be available. For example, some of their first successes are in hospitals, nursing homes, and home health care.

Whether the ability to meander through a remote location is necessary, or even practical, depends a lot on the facility’s layout. Are there doors that must be opened? Stairs to climb? Multiple buildings to move between? Is WiFi available everywhere? And then, there’s the need to recharge before running out of power and going into a shut-down mode.

Bear in mind, what we’re seeing here is the emergence of a new industry; and if Moore’s Law applies here as it does to so many IT spheres, it won’t be long before these gadgets are inexpensive, commonplace, and far more flexible and intelligent. Let’s just hope they don’t get too smart, and decide to take over!

More information about the products discussed above are available from the companies’ websites, as listed below: