Lenny (aka “testing”) appears poised to displace Etch as the popular Linux distribution’s “stable” branch next month. To see how Lenny was coming along, I loaded the latest preview (beta 2) of its KDE system image onto an available Thinkpad, and took it for a spin.

Now, I’ve been a strong supporter of Debian on desktops, in servers, and in devices systems for the past several years, and only recently moved to Ubuntu in an effort to support the Black Tower‘s more leading-edge hardware.

Admittedly this test of Lenny is limited in its scope. After all, the Thinkpad testbed is an aging 2662-35U with a 600 MHz Pentium III CPU, 192 MB SDRAM, a 20 GB hard drive, and a CD-only optical drive. However, assuming Lenny continues to perform satisfactorily in further tests on the Thinkpad — and I am optimistic that it will — I will seriously consider substituting it for Kubuntu on the Black Tower.

What follows is a brief account of the steps I used to install Lenny KDE Beta 2 on the Thinkpad, along with a handful of hacks and fixes that helped it meet my minimum requirements. Bearing in mind that individual systems and personal preferences differ, you can be certain of one thing: your actual mileage will vary!

Installing from the KDE CD

Download the desired CD iso image from the LennyBeta2 area of Debian’s website, and burn it onto a CD (I use K3b to do this on my Linux systems). The image I grabbed a few days ago was “debian-LennyBeta2-i386-kde-CD-1.iso.”

Now, boot the system from the newly burned Debian Lenny KDE CD, and follow the relatively simple steps presented by the installer, to pre-configure and install the OS on the system. I recommend using the “graphical installer” option provided on the boot CD’s initial menu. When the screen for selecting categories of software appears, be sure to click “desktop environment” so that the KDE desktop environment gets installed.

When the installation of the OS is complete, the installer will prompt you to remove the CD and reboot. The system should boot up and present the KDM desktop manager screen, at which you enter your login name and password.

Booting up into the Lenny Beta2 KDE desktop for the first time produced a screen that looked like this: 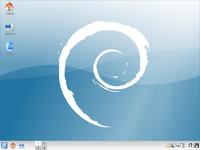 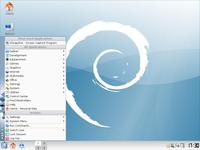 
NOTE: Unless otherwise stated, all of the commands below must be performed from a console window (KDE menu > System > Konsole), as root. To make it clear where each command line starts, the commands are listed with bullets; of course, the bullets are not part of the commands 😉

Then close the editor, saving the revised file as sources.list.

Next, add the key required for accessing the Debian multimedia repository by performing the following command line steps:

Personally, I think it’s a mistake to use non-standard versions of Mozilla’s Firefox and Thunderbird browser and email apps, as they’re probably the most popular open-source software on the desktop. For example, Firefox’s desktop marketshare is currently estimated to have reached nearly 20 percent, whereas Linux remains at a paltry 4 percent.

Due to their high level of popularity on both Linux and Windows desktops, I think it’s important to keep them consistent — including their names and their desktop icons — as opposed to propagating multiple versions modified for (or tuned to) specific OS versions. Additionally, I like to be able to promptly obtain bug- and security-fixed versions directly from Mozilla.org via the two programs’ automatic update options.

For these reasons, I always get rid of modified versions of the “dynamic duo” and install “the real thing,” obtained directly from Mozilla.org.

Here’s the process I use:

Next, we download, install, and test the Opera browser, Real Player multimedia player, and the browser plugin for Sun Java. They each install in a slightly different manner.

For Opera, the download brings you a .deb file. Use the following command to install it from that file (as root):

Start by downloading the Real Player installation file from Real‘s website. Using a console command line (as root), change the file’s permissions to be executable and then execute it, as follows:

Now comes the installation of Sun’s Java plug-in. From the KDE desktop (as user, not root), run Synaptic (KDE menu > System > Synaptic Package Menu); it will request your system’s root password as it loads. Once the program starts, use the program’s Search button (at the top of the screen) to locate packages with “java6.” From the results, market these two for installation: sun-java6-jre and sun-java6-plugin. Then, click the “Apply” button at the top, to install them. Exit the program when the installation is complete.

At this point, the total install occupied about 3.6 GB the system’s hard drive, and my KDE desktop looked like this: 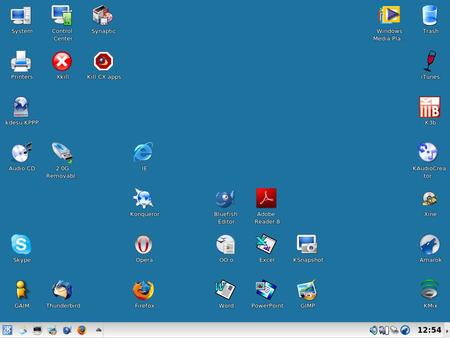 In my experience there are a handful or so of key functions that don’t always come up right in Linux systems, so I test them each time I experiment with a new distribution or major version upgrade. The functions I tend check, and methods I use, and the results with this Lenny Beta2 KDE CD image install appear in the table below.

All in all, I’m quite pleased with this current snapshot of Debian’s Lenny KDE implementation. Other than the need for a few hacks and fixes, my main complaint with it is its inclusion of way too many of KDE’s rich set of applications, such as games, tools, etc.

Yes, I realize I could have created a more customized KDE system by starting from the net-install CD image and adding just what I want (I’ve certainly done that before, with Etch). But, I wanted to test the pre-packaged Lenny KDE version — a sort of “known good” system — first, before going about building my own. Indeed, I plan to do just that in the next month or two. And as I mentioned at the start of this post, if that process goes well I might replace Kubuntu with Lenny/KDE on the Black Tower. Stay tuned!

Two appendices appear below: (1) fixes and hacks; (2) screenshots of the KDE desktop and a few key functions discussed above.

I’ve found for years that kppp isn’t usable without making some minor adjustments to files in the /etc/ppp/ area. Here’s the process I needed to use to make my Lenny Beta2 KDE system dial out and connect to the Internet.

Note: On other KDE installs, it was not necessary to run kppp as root. I suspect permissions can be altered to eliminate that requirement, but I didn’t want to hack up the ppp area too much. (In case you’re wondering: yes, the user is a member of both the dialout and dip groups.)

With my Lenny Beta2 KDE install, neither sound function worked. After consulting the googacle, I settled on a somewhat crude hack, which consists of forcing the system to run the ALSA sound system and avoid OSS. So far, it works great and doesn’t seem to have caused any problems.

The hack appears below, but one note: before jump through hoops to get sound working, be sure you open up kmix and turn on the various audio channels and set them to reasonable volume levels.

OK, did that work? It did for me. But please, don’t ask me what it does!

At first, I was unable to get my HP Laserjet 1020 printer to install using the default options in KDE's Printer Management tool. To solve this problem, I downloaded, built, and installed the foo2zjs printer driver package.

Now, carefully follow the procedure detailed in the INSTALL file contained within foo2zjs/. For my HP Laserjet 1020, the process I had to follow was (as root):

Phew! Assuming all went well in the above process, open up the KDE printer management tool (KDE menu > Control Center > Peripherals > Printers) and add a printer. I selected the "Laserjet 1020 foo2zjs" driver. Note: For some reason, the system required me use the "Administrator Mode" option of the KDE printer configuration tool to select and configure the printer.

Finally, try printing a test page. Did it work? It did for me.

To get my Atheros chipset-based PCMCIA WiFi card working, I had to install the madwifi driver package. This is the procedure I used:

From a console window, as root, issue the following commands:

If all goes well in the above string of commands, run the command following command and look for indications that the wifi card has been recognized when you plug it in and remove it. also, it should show up in ifconfig.

Type Ctrl-C to exit the syslog monitoring command. The above procedure comes from the madwifi driver website.

To connect to a WLAN, use knetworkmanager (KDE Menu > Internet > KNetworkManager). It lets you view the signal strength of WLANs in your area, select one, and specify the network's security options and key.

Update: Getting rid of hundreds of MBs of KDE games

At the suggestion of a reader, I got rid of a large batch of automatically installed KDE games that I had no use for. It's easy to do, using these two console commands (as root):

Don't worry that it says it will remove kde -- that's just a "meta package" and won't remove any actual kde software (other than the requested games group). Removing any single package group from the KDE metapackage -- e.g. removing KDE PIM or KDE multimedia -- also would have removed the KDE meta package. Frankly, I think this situation is a bit weird, since, unless I'm mistaken, "apt-get install kde" has a very different effect (i.e. it installs the entire KDE KDEnchilada).

Following this step, the Debian Lenny KDE Beta2 install occupies about 2.8 GB of space on the Thinkpad's hard drive, not counting the contents of my /home/rick/ directory.

That's it for my fixes and hacks. Below are various screenshots relating to the install and tests -- click each thumbnail for to enlarge: