Last month, we learned from Gartner that Android will probably be the number-two worldwide mobile OS this year, and may lead the pack by 2014. With Android’s growing use as the OS embedded in phones, netbooks, tablets, set-top boxes, and LCD HDTVs, we can’t help wondering: will the Linux-based OS soon dominate the entire non-PC consumer device OS market?

To gain some perspective on Android’s rapid rise to prominence, here’s a short summary of its key milestones:

“Brace for the future” 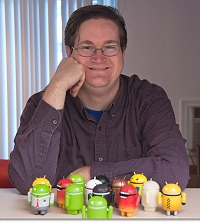 As Dan Morrill, Google’s Open Source & Compatibility Program Manager, wrote in a recent blog post aimed at Android’s vast army of app developers, “Android started on phones, but we’re growing to fit new kinds of devices. Now your Android app can run on almost anything, and the potential size of your audience is growing fast.”

Obviously, if Google has its way, we’ll soon be surrounded by swarms of Android gadgets of all shapes and sizes. Apple CEO Steve Jobs, on the other hand, begs to differ.


3 responses to “The Android invasion cometh: is resistance futile?”