When pigs fly, and other wind-power mysteries

When pigs fly, and other wind-power mysteries

Slashdot, the online “geek news” aggregator, carried a story last week about a wind-powered cart that could travel downwind faster than the wind.

Having sailed since childhood, that seemed as implausible to me as pigs flying. Once the cart was going faster than the wind, the cart’s sail would fill in the wrong direction (known as backwinding) and slow the vehicle rather than push it forward. But, as I looked into the issue, I began to see how it might work.

Before reading my explanation of how and why it’s possible, check out the YouTube video below, which shows the cart going faster than the wind. Disregard the first 20 seconds, which show another vehicle. Then, note the streamers on the cart blowing forward, showing that the wind is coming from directly behind. 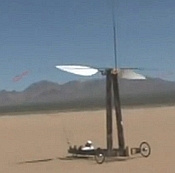 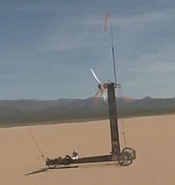 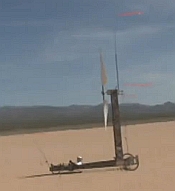 Seeing is believing! Watch the video…

How the wind-powered cart outruns the wind

The first key piece of data that helped me to understand how the cart could go faster than the wind, directly downwind, was to recognize that the propeller acts solely to produce thrust. It is not a windmill generating power. Rather, it is a propeller consuming power.

I obtained the second major insight from an analysis authored by Mark Drela (pdf download). Drela is an MIT professor of Aeronautics & Astronautics, designed the human-powered aircraft Daedelus that set a world distance record by flying 72.4 miles from Crete to Santorini, and set a world speed record for human-powered water craft in 1991.

At first, Drela’s analysis appeared too complex for me to understand (yes, even Stanford professors can feel that way), but as I went through the equations step-by-step, I saw what Drela was saying. I also found a simpler way to express the basic idea, and include that below. Once you have the basic idea, the full explanation is easy to get.

The trick to simplifying the analysis is to initially assume 100% efficiency in all elements of the system — no aerodynamic drag, no friction, and no losses in transmitting power from the wheels (where power is generated) to the propeller (where that power is consumed to provide thrust). If that simplified analysis indicates that net thrust can be generated at cart speeds that exceed the wind speed, then some of that net thrust can be used to overcome real-world losses.

In this simplified model, there is no drag due to friction or other losses so D, the drag on the wheels, is entirely due to the power being generated there to drive the propeller. Letting P denote the power generated at the wheels, and remembering that power is force times velocity…

Letting T denote the thrust generated by the propeller, and still assuming 100% efficiency, the power needed to drive the propeller is…

Note the difference in speeds: The wheels see the ground speed V, while the propeller sees the smaller apparent wind speed V-W. That difference turns out to be the key to how the system can work.

In this lossless model, the power generated at the wheels exactly equals the power consumed by the propeller, which is why I could use the same value of P for both. Equating the right hand sides of the above two equations, we find:

…which shows that the thrust will be twice the drag!

Because of the tailwind, (V-W) is always less than V and the thrust will always exceed the drag. In this simplified model, the cart therefore accelerates faster and faster. In the real world, inefficiencies will cause the cart to top out at some speed. But, if the system is well designed, this top speed will be significantly greater than the wind speed.

We saw that when the cart’s ground speed is twice the wind speed, the thrust was double the drag. A seemingly even more astounding result occurs when the cart is moving just as fast as the wind, so that V-W = 0. Then the thrust in the simplified model is infinite.

That actually makes sense because an ideal propeller in still air needs no power to generate thrust. That’s because, neglecting aerodynamic losses (parasitic drag in aero-speak), all the power to drive the prop goes into accelerating the air from rest (which is how the air appears to the prop when V=W) to its final velocity when leaving the propeller.

[About Martin Hellman — Martin Hellman is renowned for his invention, with Whitfield Diffie and Ralph Merkle, of public key cryptography. In addition to many other uses, this technology forms the basis for secure transactions on the Internet. Hellman’s latest project, Defusing the Nuclear Threat, has been endorsed by a number of prominent individuals including two Nobel Laureates. This guest post was adapted from an article originally posted by Hellman on his NuclearRisk blog.]