This in-depth review takes a close look at the second- and third-generation Apple TV streaming media players, equipped with their recently released v5.0 firmware. Despite the third-generation Apple TV’s hardware and user interface tweaks, Apple still hasn’t added a plug-in apps ecosystem; but the v5.0 firmware’s revamped icon-style user interface hints that such a capability is in the offing.

Apple introduced the second-generation Apple TV in the Fall of 2010, roughly when D-Link was accepting orders for its Boxee Box, Google was unveiling its Google TV platform, and Roku started shipping its second-generation Roku XD players. 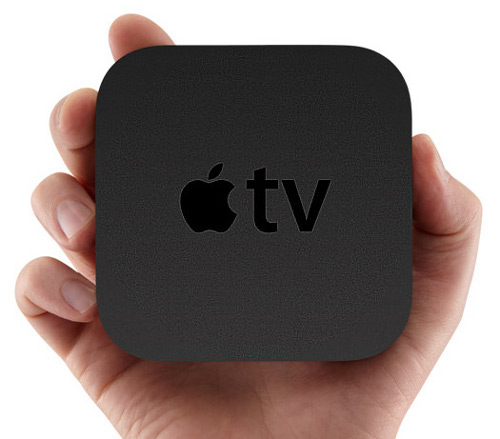 The tiny device (pictured above) represents a substantial size and cost reduction relative to the first-generation Apple TV box. Specifically, its size shrank by three-quarters, to 3.9 x 3.9 x 0.9 in., and its price plummeted by two-thirds, to $99.

Notable hardware enhancements in the third-generation Apple TV reportedly include…

For a complete ATV3 teardown including lots of cool photos, visit iFixit.com.

On the software side, the Apple TV’s version 5.0 firmware — released in conjunction with the third-generation Apple TV, but which is also a free upgrade for second-generation Apple TVs — provides several new features and capabilities. As listed by Apple, these enhancements include…

From a content perspective, Apple’s competitors have long since adopted a strategy of delivering hundreds of content channels — including numerous sources of pay-per-view, ad-supported, and free content — on their streaming media players.

In contrast, the Apple TV device is much more oriented toward leveraging users’ preexisting iTunes investments and encouraging an enduring iTunes revenue stream. Whether that’s what users want most remains to be seen, now that the market is heating up with alternatives such as Google TV, Roku, and the Boxee Box. 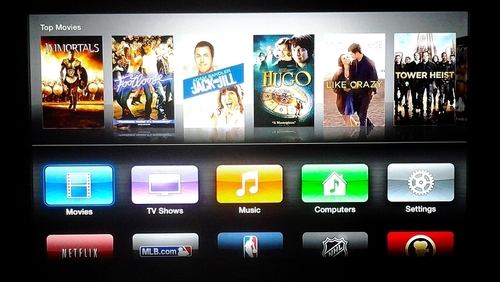 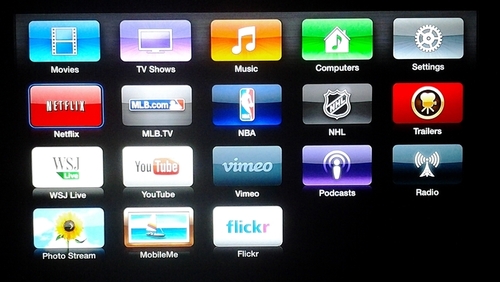 The table below summarizes the key features and functions provided by the second- and third-generation Apple TV streaming media players. For comparison purposes, Roku’s similarly-priced Roku 2 XS player is also included in the table.

The list below indicates the formats supported by the second- and third-generation Apple TV devices, as listed by Apple on its website.

Apple currently reserves the microUSB connector for service and diagnostics purposes, but it’s also being used for “jailbreaking” of the device. Unfortunately, this port can’t be used for accessing external media — either the hardware design doesn’t support USB OTG capabilities, or “USB host” support is simply unimplemented in the Apple TV’s current firmware.

To give you an idea of what it’s like to use the third-generation Apple TV (or second-generation model with its v5.0 firmware update), we’ve assembled an extensive screenshot tour in a separate post. You can use the index below to access the screenshots in the tour; or, jump directly to the complete Apple TV screenshot tour page. But please be sure to return here for the balance of this review, which includes a run-down of what we like — and don’t like — about the third-generation Apple TV.

This section contains a few additional comments on the operation and functionality of the second- and third-generation Apple TV streaming media players, organized in a compliments-and-complaints breakout.

How do Apple’s latest TV media streaming players compare to the growing field of competing products?

We had hoped Apple’s third-generation Apple TV would provide more default multimedia channels and add functionality for installing third-party channels through Apple’s App Store — but the main enhancement in generation 3 is the increased video output resolution of 1080p. On the other hand, future firmware updates certainly could provide the missing capabilities.

General speaking, we’d only recommend Apple TV to people whose multimedia world tends to revolve around iTunes — mainly dyed-in-the-wool Mac, iPhone, and iPad users. By far, Roku is what we recommend most, to those who’ve resolved to cut the cable TV umbilical cord, but haven’t figured out how to go about it yet. “Get a Roku player and an HDTV antenna, cancel cable, and don’t look back!,” is our typical advice.