After losing patience with waiting for Netflix video streaming to come to the Linux version of Boxee, and needing to relocate my Roku Netflix Player to the garage’s fitness equipment zone, I decided to add a Windows partition to the Boxee Box (my DIY media center STB) so we could continue to enjoy instant Netflix downloads on our family-room TV.

So when Ubuntu 9.04 (aka Jaunty) went gold last month, I used the new Linux release as an opportunity to reconfigure the Boxee Box to dual-boot Ubuntu and Vista.

Recognizing that Windows can get cranky when it’s not in control of the “C” drive, I installed Vista first and then added Ubuntu to the mix. The process went smoothly and within a few hours the system was up and running. This time, however, I configured grub to boot into Vista by default.

The screenshot below shows the Boxee Box’s Vista desktop. 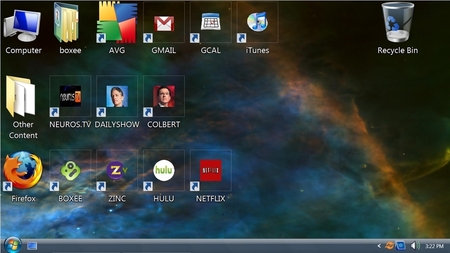 Which of these three works best? Here’s a brief assessment of each app’s key strengths and weaknesses…

Boxee streams both Web-based and local content within an excellent 10-foot UI. The software was introduced last fall and is continuing to be offered as a free, alpha-level download from Boxee’s website. 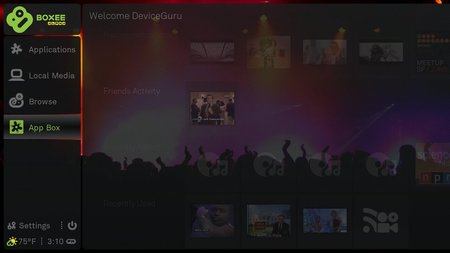 We’ve covered Boxee in depth over the past nine months, particularly in the comprehensive Boxee Box Cookbook post. Check out that article for more details on Boxee. For those unfamiliar with Boxee, here are a few screenshots illustrating what Boxee’s UI looks like, and what it can do:

Thanks to a tip from a reader, I downloaded and installed ZeeVee’s Zinc on the Boxee Box’s Vista partition. Its extensive capabilities came as a pleasant surprise. Zinc combines a modified Firefox browser with ZeeVee’s online media streaming Web service to produce a highly functional Web-based media streaming portal.

This approach is reminiscent of the way a tweaked Firefox teams up with the Neuros.TV content portal to provide Internet-based media streaming for the Neuros LINK. Relative to the LINK, however, Zinc seems to be based on a much more substantial extension of Firefox, resulting in a more highly integrated, polished, and powerful Internet-media streaming solution. 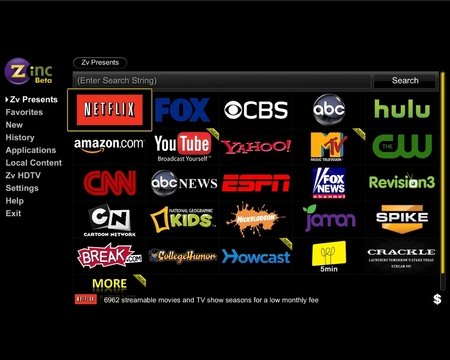 Zinc can be installed either as a standalone application (a Firefox-variant) or as an extension to an existing Firefox install. Both are available from ZeeVee’s website, which also hawks hardware devices for transporting media around the home network.

Here are some Zinc screenshots:

When the Hulu Desktop showed up as a free download in Hulu Labs several months ago, it helped explain (but didn’t justify) why Hulu had begun taking steps to prevent Boxee from accessing Hulu’s content. 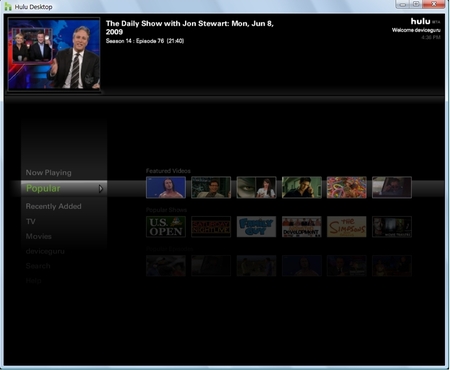 The Hulu Desktop — a Boxee killer?
(click image to enlarge)

In light of the fact that the Hulu Desktop’s exclusive purpose is to search for, select, and stream content from Hulu.com to PC and TV screens, it’s not surprising that it provides a more powerful interface to content available from Hulu’s website than what’s available from more generalized media-streaming applications.

So, is Hulu’s new Boxee-like media streaming application a threat to Boxee? We think not, provided Boxee advances its Hulu plug-in beyond its current state.

Here are some Hulu Desktop screenshots:

First of all, the Hulu Desktop — though an interesting addition to the field — is disqualified, since it’s limited to use with content available from Hulu’s website. It’s somewhat good at what it does, but it simply doesn’t do enough. That leaves Boxee and Zinc as the key contenders.

So how do Boxee and Zinc compare? A summary comparison between key features of the current versions of these two content-streaming platforms appears in the table below.

From the data in the table above, it’s clear that Boxee and Zinc each have key strengths and weaknesses. Depending on what’s most important to you, either application might be the preferred solution.

I really like Zinc’s access to key content channels directly on the homescreen, as well as its one-click access to a customizable favorites page. On the other hand, I much prefer Boxee’s 10-foot UI experience, and the tight integration of all the Boxee-developed content-access applications — although that’s not the case with some of the third-party contributed applications.

Additionally, Boxee is working on a new version — due out in several months — that reportedly will address several of my main Boxee complaints. In particular, at the San Francisco Boxee Meetup last week, Boxee CEO Avner Ronen listed these planned changes and enhancements in the new release:

Preview of beta-Boxee’s redesigned homescreen shown last week by CEO Avner Ronen. User-designated favorites are in the left; shared content is in the middle; subscribed queues are on the right; small banner ad is at top-left.
(click image to enlarge)

Meanwhile, the continual addition of third-party content access applications to Boxee continues unabated. All those enhancements, combined with the promised addition of Netflix support to the Windows version of Boxee “very very soon” should make it a clear winner over Zinc for my purposes.

Still, if Boxee wants to achieve its goal of earning revenue by licensing its media streaming platform to device providers, it had better get busy making the Netflix “Watch Instantly” feature available on Linux. Roku managed to do it, so there’s no excuse not to make it happen! Using Windows in a set-top-box just won’t hack it: have you ever tried turning Windows Vista or 7 into a device-like appliance? Forget about it!

As far as my own BoxeeBox STB is concerned, I can’t wait to revert to being back using a Linux platform for all my media streaming-media needs.

24 responses to “In-depth review: Boxee vs Zinc vs Hulu”