First impressions of the Neuros Link

Having recently constructed the Boxee Box, I naturally was eager to check out Neuros Technology’s somewhat similar IP-TV set-top box. Though currently at a “gamma” release, the Neuros “Link” shows great promise.

The Link, available online for about $300, is a compact PC-compatible system running a stripped-down Ubuntu 8.10 OS, enhanced by various additions and tweaks implemented by Neuros Technology’s developers in concert with the Link’s user community. Interestingly, the device currently boots and runs entirely from a 3.5GB thumb drive, a feature touted as reducing cost, power, and noise. 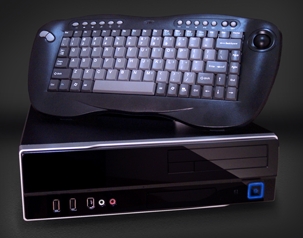 What’s in the box, geek?

The Link is built around an Asus M3A78-EM microATX motherboard, fitted with a 2.8GHz AMD Athlon LE-1660 processor and 1GB of DDR2 SDRAM. 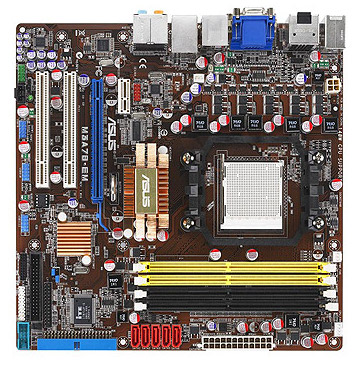 The Link’s compact, low-profile enclosure was sourced from Chenbro. It appears to be a customized version of Chenbro’s PC719 “slim desktop” model, shown on the right.

I/O ports available on the Link’s front panel include two USBs, Firewire, and audio in/out jacks. Additionally, the Link’s back end provides a total of 21 interface connectors, shown in this photo and detailed in the list below it:

Not surprisingly, I hastened to rip open the box to check out its innards. Here’s what I found…

Inside the Neuros Link
(Click each thumbnail to enlarge)

Incidentally, the front-panel power on/off button has a somewhat clunky look and feel. Nevertheless, it serves its purpose adequately.

Additional hardware specs are available on the Link’s wiki.

As mentioned previously, the Link’s OS is a trimmed-down version of Ubuntu 8.10. Interestingly, Neuros has opted to maintain tighter control of the Link’s OS by hosting its own Ubuntu 8.10 package repository for the Link. The company says it did this to “increase stability” of the device’s OS.

Other noteworthy Link-specific software bits include:

I’m sure there are many more Link-specific customizations that I haven’t discovered yet.

Upon startup, the Link displays a few fleeting messages and then shows a custom splash screen (shown below) until GNOME has loaded. 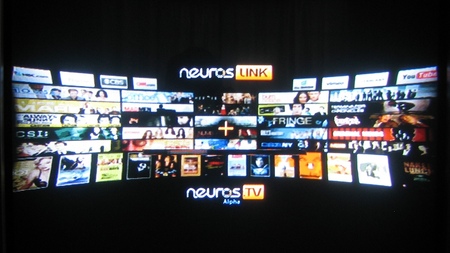 When GNOME starts, it immediately launches Firefox (based on a setting at Menu > Preferences > Sessions). Firefox, in turn, loads its “home” page, which is the Neuros.tv media portal (shown below). 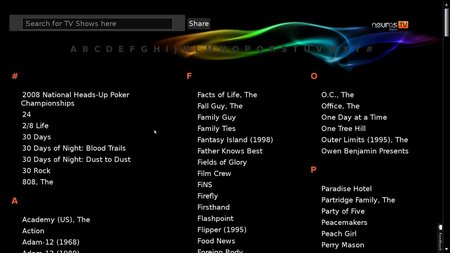 Despite its simplicity, this approach results in a relatively well integrated, consumer electronics-style user experience.

When connected to my Sony HD-ready CRT-TV, the Link boots up into VGA (640×480) mode. As soon as GNOME launches, the video mode gets switched to 1080i — the highest resolution supported by the Sony TV. Unfortunately, the Link’s video driver doesn’t do a very good job configuring the 1080i mode’s timings, resulting in an unsightly flicker and a fair amount of overscan.

Given the relatively small size of the Sony TV’s screen (27 inches diagonal) combined with the fact that not much content is available currently in 1080i, I used GNOME’s screen resolution settings tool to set the desktop environment’s default resolution to 720p instead of 1080i. I can always restore it to a higher resolution later, when either the Link’s ATI video driver or my TV gets upgraded.

Here are a few screenshots showing the Link accessing its web-based media portal to locate, select, and play TV shows:

Incidentally, the Link’s media portal (Neuros.TV) is free for use by anyone. try it out on your PC. It’s purely browser-based — think of it as a web service for locating and playing TV shows.

So, just how well does the Link perform its intended function?

First, let’s clarify what the Link is meant to do. Neuros Technology defines the Link as…

“a TVPC that connects your TV to the Internet. Powerful, quiet and small enough to fit in your entertainment center, it enables you to play all your local content and access TV shows, movies, and clips available on the web with no fee or subscription.”

In fairness, the usefulness of the Link as it exists today needs to be judged in the context of its status as a pre-production (“gamma”) product that’s only being promoted to developers and hackers. Neuros Technology’s objective in offering the gamma Links in this way is to gather feedback from early users, and to grow a community of developers and hackers who will contribute to the advancement of the Link’s internal software and its online media portal.

That said, here are a few key functionality shortcomings that I noticed:

Notwithstanding the above issues, the Link and its media portal actually work quite well within the TV-show-only restriction, provided you don’t mind having the bulky “keymote” sitting around.

Adding a hard drive to the Link

It seemed like the off-the-shelf Link — with all its software and settings residing within a 3.5GB thumb drive — was wearing a straight-jacket. So after seeing how well it ran using the thumb drive as its mass storage (it did quite well, considering that restriction), I set about adding a hard drive.

Instead of installing the HDD inside the Link’s enclosure, I took the easy way out and used a spare external, USB-interfaced HDD. Here’s an outline of the process I used to transfer the Link’s OS onto the USB HDD and prepare it for use:

After performing these steps, I booted up the Link from the USB HDD. Once it booted, I opened up a console window on the Link and ran “mkswap /dev/sda3” to prepare the swap partition for use. Then, I rebooted the Link and tested various functions to ensure that everything was working properly in the new HDD-based configuration (it all went smoothly).

Having released the Link from its 3.5GB straight-jacket, I next installed two major additional content sources on the device.

The first was a Hulu launcher on the Link’s GNOME desktop. That simple addition lets me bypass the Link’s normal media portal and go directly to Hulu, whenever I know that it’s movies — rather than TV shows — that I’m after. For this purpose, the keymote’s trackball and large QWERTY keyboard come in handy for entering search terms and navigating around Hulu’s website.

The other major content-source addition I installed was Boxee. To do that, I simply followed the straightforward procedure listed on Boxee’s download page. Here are a few screenshots showing Boxee surreptitiously running on the Link (note the evidence of Boxee’s “Hulu problem” in one of the screenshots):

Boxee running on the Neuros Link

A couple of other minor mods I made to the Link were:

On the suggestions-for-improvements front, here are two:

Counterbalancing the gamma-level Link’s shortcomings is the fact that at $300 — substantially below the impulse-purchase threshold — the Link represents an exceptional value. It’s a compact, quiet, A/V-capable platform supported by open standards, open software, and a growing community of enthusiasts — in short, it’s packed with potential.

Even in its current, “gamma” state the Neuros Link strikes me as an irresistible gadget for early adopters itching to connect their TVs via the Internet to a wide range of TV shows, movies, and other A/V content. On top of all that, it’s a Linux PC!

What self-respecting geek wouldn’t want to snag one of these? 😉

13 responses to “First impressions of the Neuros Link”