The key features and specs of the Nexus 7, Galaxy Tab 2 7.0, and two second generation Kindle Fire models are compared in the table below.

It’s clear from data tabulated above that Amazon’s low-end second-generation Kindle Fire is outclassed by the other three tablets. With that in mind, the table below zooms in on the relative advantages (in green) and disadvantages (in red) of the Google Nexus 7 (manufactured by Asus), Samsung Galaxy Tab 2 7.0, and Amazon Kindle Fire HD.

We benchmarked the CPU, math, graphics, and memory performance of the Galaxy Tab 2 7.0 and Nexus 7 using the Android AnTuTu benchmark app. The results, based on AnTuTu version 3, appear in the chart below. Unfortunately, we did not have a Kindle Fire HD available to include in the test. 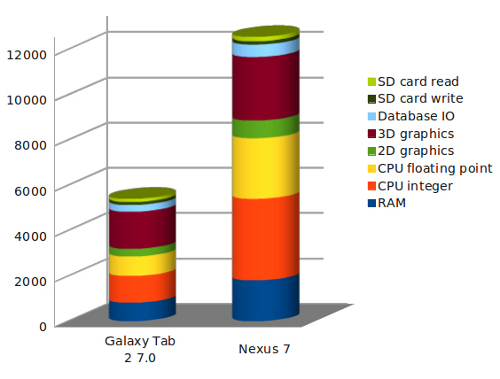 In conclusion, depending on what’s most important to you, any of these three 7-inch Android tablets could turn out to be the better choice. For example…

Personally, I prefer the larger size of any of these 10-inch Android tablets to any 7-inch tablet for most purposes. As far as 7-inch tablets go, however, I favor the Nexus 7 based on its high speed quad-core performance, latest Android 4.2 OS, lightest weight, and comfortable nonslippery rear surface. Since most of us have smartphones with decent built-in cameras these days, the Nexus 7’s lack of a rear camera isn’t too serious a deficiency.

For more information on each of the above tablets, go here:

5 responses to “Nexus 7 vs Galaxy Tab vs Kindle Fire”