On September 1st, the Ubuntu development project issued the beta version of Ubuntu 10.10 — aka “Maverick Meerkat” — as a step toward achieving a stable release by October 10th. If a quick test of the beta by DeviceGuru is any indication, this new Ubuntu version could be the most user-friendly, full-featured desktop Linux distribution ever.

A few specifics described in the announcement include:

Detailed release notes for the beta are available here.

Downloading and installing Ubuntu is fast and easy. Go to the Ubuntu download page, select the 32- or 64-bit version, and click the big “Start download” button. Then burn the download ISO file onto a CD-ROM, boot up the system from it, and follow the simple prompts.

In version 10.10, Ubuntu’s installation process is similar to what it’s been, but it’s now easier and quicker than ever. Following a handful of mouse clicks in response to easily-understood prompts, the OS starts installing. One clever enhancement is that, to save time, the installer starts preparing the hard drive and transferring packages to it in the background, while continuing to prompt you for particulars such as your name, password, timezone, and so on.

Here are some screenshots showing various steps in the mostly-automated installation process:

The screenshots below show Ubuntu 10.10’s desktop immediately following first-time boot. You can see the OS’s default applications and tools from the drop-down menus…

A tour of Ubuntu 10.10’s desktop and menus
(click thumbnails to enlarge)

The first thing I always do following a fresh install of a Linux desktop is to configure a few key settings to my liking. In this case, these included:

All these are easy to do using standard desktop configuration functions provided by GNOME. Here’s the result of these adjustments: 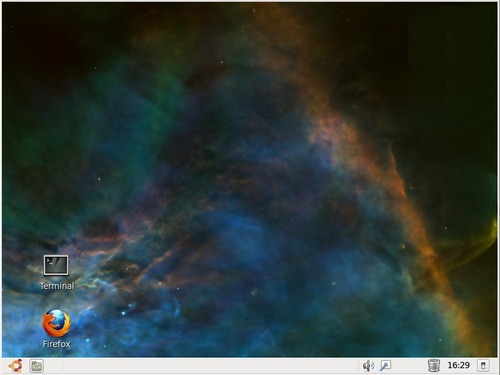 Ubuntu 10.10 comes with a wide range of the most popular Linux applications desired on a typical desktop PC, including some proprietary ones that many users desire. Take a closer look at this screenshot and you’ll see the new option for including proprietary functionality as an integral aspect of the install — another nice touch!

As a result of the broad selection of software packed into its CD-ROM-sized ISO image, Ubuntu 10.10 is relatively complete immediately following the fast and easy installation process. Still, your bound to want some other applications and tools, and the “Ubuntu Software Center” utility (shown below) makes adding most of what you need a snap. Currently, there are over 30,000 packages available for one-click installation, thanks to the great popularity of Ubuntu — and of Debian GNU/Linux, on which Ubuntu is based. 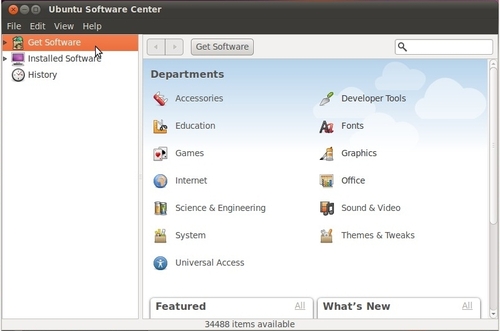 Ubuntu Tweak is your friend

In the past, there have always been a handful of my favorite applications that were absent from Ubuntu’s standard software repositories. Filling this gap required visiting a variety of websites, downloading the appropriate .deb files, and installing them via the dpkg utility.

Thankfully, a relatively new helper-application called “Ubuntu Tweak” simplifies this process, while also adding some nifty system tweaking capabilities. Consequently, these days I always fire up Firefox, head over to Ubuntu-Tweak.com, and download/install it following each new Ubuntu installation I perform.

These three screenshots show a few highlights this process:

I urge you to explore the options available in Ubuntu Tweak’s menus. Its capabilities extend far beyond providing automated installation of valuable applications, although that would have been enough to make it a must-have tool. Its system management options currently include:

Many — if not all — of these functions can be managed by other utilities (some via the command line), but Ubuntu Tweak integrates them, making it easier to browse settings and tune them periodically. I particularly like the access it provides to compiz settings.

Next, I headed over to Google’s Chrome download page to snag a copy of the recently released “stable” release of the Chrome browser. Click the big Download Google Chrome button, specify either the 32- or 64-bit version (as appropriate to your system), and start the download going by clicking the Accept button. Then click the package icon through Gnome’s file manager (or use a dpkg command, if you prefer) once it’s finished downloading.

These two screenshots show the process before (downloading Chrome via Firefox) and after (viewing Google via Chrome):

Next, I added Pandora Desktop to the system. Doing this requires subscribing to Pandora One for a small monthly fee. I must confess: I’ve become addicted to Pandora!

Adding Pandora Desktop to the system
(click image to enlarge)

Another tweak I made was to restore the volume control applet in the bottom panel on the screen, which seems to have gone missing in the latest version of Ubuntu. This can easily be done with the aid of Ubuntu Tweak’s “Auto Start Programs” function. There, I added a startup function named “GNOME Volume Control” and specified “gnome-volume-control-applet” as its command.

Finally, I started Google Gadgets (Menu > Internet > Google Gadgets) and selected a clock gadget as a demonstration of what’s possible via gadgets on the desktop. Here’s a screenshot showing the Gadgets configuration tool: 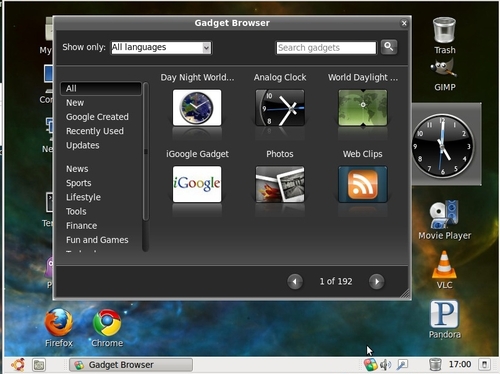 After all these adjustments and tweaks, my customized Ubuntu 10.10 beta desktop looked like this: 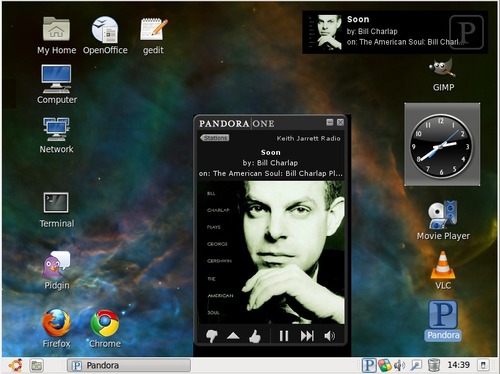 Naturally, your tastes will differ from mine. The great thing about Linux — and Ubuntu is no exception — is that your customization options are virtually unlimited.

The bottom line, though, is that even at its current beta level, Ubuntu 10.10 appears to require the least post-install customization and is the slickest, most user-friendly Linux implementation I’ve tested in the past 10 years.

You can get your own free copy of Ubuntu 10.10 here. Bear in mind, though, that it’s currently classified as a “beta” release, so you might want to avoid installing it on mission critical systems just yet. However, October 10th, when the official release is due, isn’t far off.


5 responses to “Previewing and tweaking Ubuntu 10.10”