Amazon’s video-on-demand (VoD) service has just been added to Roku’s Internet-based VoD set-top box. The upgrade, pushed out to the devices over the Internet, is the first to expand the Roku box’s content beyond its Netflix-centric origins.

The free upgrade, promised in January, lets Roku STB users access more than 40,000 commercial-free movies and television shows from Amazon’s VoD library, at rental prices ranging from $1 to $3 for a 24-hour viewing window.

Roku STB users are about to discover that their device’s home screen offers them the ability to watch content from both Netflix and Amazon on their devices, as pictured below. 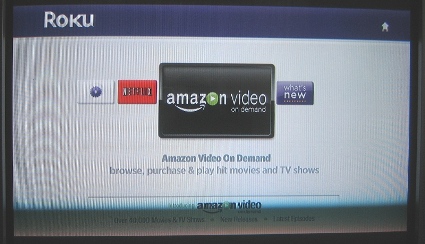 Roku STB users who wish to use the Amazon VoD service must first create an account on Amazon.com and set up credit card or other payment method. Next, they obtain a unique code from their Roku STB’s Amazon setup screen and enter it on Amazon’s website, which actives their device’s Amazon VoD support.

Once that’s taken care of, they can browse, select, and play Amazon’s movie and TV show rentals on their TV, under the control of their Roku device. Amazon’s extensive library is segmented into movie and TV show areas, each sorted by numerous genres.

There’s no text-based search feature on the Roku STB, at least for now, a shortcoming that probably makes the task of selecting a specific video from among Amazon’s 40,000 VoD titles a bit like finding a needle in a haystack. Although we haven’t figured out how, yet, we’re convinced that there must be a way to select and queue videos for the Roku box by accessing Amazon’s VoD website from a PC.

Roku has said that in addition to the Amazon VoD upgrade, it also plans to expand the $99 STB’s content sources to include various “movie channels, TV channels, Web video channels, and more.” This could include sources such as YouTube, Hulu, Comedy Central, MSNBC, etc., although the company hasn’t offered many clues beyond the addition of Amazon’s VoD content.

Roku’s VoD STB faces competition from a growing number of IP-STBs (Internet protocol-based set-top boxes), which have entered the market over the past year or so. These include Blockbuster’s STB and associated VoD service, Syabas’s Popcorn Hour (aka NMT), Vudu’s Vudu box, Myka’s Myka STB, and Neuros Technology’s Link, not to mention devices such as AppleTV.