[Updated Jan 24, 2013] — I recently spent a month using Samsung’s new Galaxy Note 10.1 tablet, running Android 4.0. Let’s find out what the tablet’s “Note” rather than “Tab” designation means, and how it compares to its less-expensive sibling, the Galaxy Tab 10.1, and to Google’s Nexus 10. 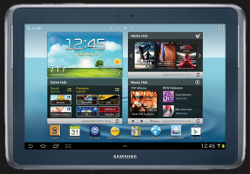 What’s special about the Galaxy Note 10.1?

When I heard about this new 10-inch Samsung tablet with pen capabilities, my initial reaction was to wonder why I’d want a tablet that packs a snap-in stylus and comes with a handful of pen-enabled apps.

Now, after playing with its pen capabilities a bit, I doubt that I would ever actually use the pen features, other than to demonstrate them to friends and fellow geeks. But pen features aren’t the only innovations that Samsung baked into the Galaxy Note 10.1.

Each of the tablet’s multiwindow-enabled apps can be operated in three viewing modes: full screen, dual view, and cascade view, as shown below.

To accomplish this, Samsung added a multiwindow app framework to its proprietary Android “TouchWiz” user interface, and jiggered a variety of Android apps to support the framework. Currently, there are 18 multiwindow-enabled apps, spanning browser, email, contacts, calendar, alarm, calculator, YouTube, video player, office suite, and other frequently-used functions. Presumably, the list will grow over time; in fact, hackers have already figured out how to add their own.

The apps tray opens up when you tap the up-arrow in the middle of the screen’s lower panel. The screenshot below shows what the multiwindow apps tray looks like after it’s been opened up.

Two buttons at the lower-left of the apps tray select whether apps launched from the tray begin in dual- or cascade-view. Multiwindow apps that are already running will switch one view to the other when the tray’s view mode setting is changed.

When they are running in either cascade- or dual-view mode, multiwindow apps have three control widgets along their top border, as shown on the left.

Here’s how those controls are used:

You can also resize and reposition multiwindow apps. For apps in cascade-view mode…

And, for apps in dual-view mode… 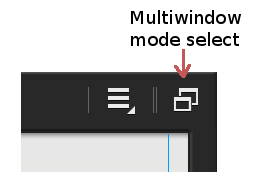 When you launch a multiwindow-enabled app from an icon located on a homescreen or All Apps screen, it runs in fullscreen view, just like a normal Android app. However, once it’s running, you can move it into multiwindow view mode by tapping the multiwindow widget in its upper-right corner (shown on the left). At that point, it will go into cascade- or dual-view format, depending on the current view selection setting in the multiwindow apps tray.

The screenshot below shows the launcher-icons for the 18 multiwindow apps that were included in the Galaxy Note 10.1’s recent Android 4.1.2 firmware update.

The screenshot above shows the multiwindow apps tray in “edit mode,” with which you can determine which apps you want to appear in the tray. To accomplish that, you tap the icons in the tray to move them to the upper area, after which they are hidden from the tray; or tap the ones in the top area to move them down to the tray. You can also drag icons around in the tray to change their position.

The YouTube video below demonstrates the Galaxy Note 10.1’s new multiwindowing capabilities, based on its Android 4.1.2 firmware update.

The new multiwindow features in Samsung’s Android 4.1.2 update for the Galaxy Note 10.1 push Android’s user interface into new territories, adding Windows-like capabilities that are sure to delight many users — and aggravate others.

From a practical point-of-view, I don’t find Samsung’s multiwindow apps to be of much interest, other than for a few pop-up functions such as a calculator, alarm clock, or other occasional use. That’s because I make a habit of organizing my tablet’s homescreen — as shown below — such that any tool or app can be launched in a tap or two.

Clearly, Samsung has been pushing the Android OS envelope, and it will be interesting to see if any of these innovations eventually get integrated into the standard Android OS.

Whether or not you care about its fancy drawing or enhanced multi-windowing capabilities, the Galaxy Note 10.1 turns out to be a highly capable, well designed Android tablet.

Overall, it’s a full-featured, high-performance 10-inch Android tablet with a bright, hi-res IPS (in-plane switching technology) display. The tablet’s computing engine is based on a Samsung Exynos 4412 system-on-chip processor, which contains a quad-core 1.4GHz ARM Cortex-A9 CPU supplemented by a quad-core ARM Mali-400 GPU. Memory resources include 2GB of RAM, 16 to 64 GB of flash storage, and a microSD slot for user-added removable flash.

From the hardware perspective, the Galaxy Note 10.1 overshadows its lower-cost Galaxy Tab 2 10.1 sibling in several ways:

Now let’s take a look at how the Galaxy Note 10.1 appears when you unpack it and boot it up for the first time. The sets of screenshots below show the tablet’s out-of-box homescreens, homescreen widgets, pre-installed apps, and default folder function. 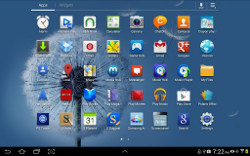 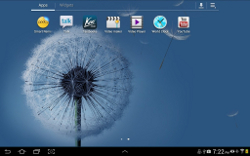 If you’ve read my other Android tablet reviews, you’ll already be familiar with the steps I go through to configure and customize my Android tablets. These include…

The screenshots in the next three sections demonstrate the results of performing that process on the Galaxy Note 10.1.

Bulking up on apps

After setting the tablet’s homescreen wallpaper to my favorite nebula image, I loaded it up with about 200 of my favorite Android apps. In the App Drawer screenshots below, you can see the app-launchers for all the apps that now reside on the tablet, including both pre-installed apps and those that I added.

For brief descriptions and demonstrations of many of the apps I installed on the Galaxy Note 10.1, visit DeviceGuru’s Favorite Android apps screenshot tour.

Next, I used the Android Folder Organizer app to organize all the apps I just installed into folders, and to build a single primary homescreen from which I could launch any of the tablet’s 200+ apps with one or two taps. Folder Organizer provides many more features and much greater flexibility than the default folder function that comes on the Galaxy Note 10.1. Using it, you can create customized folders, app launchers, and bookmarks, and assign standard or custom icons to each. 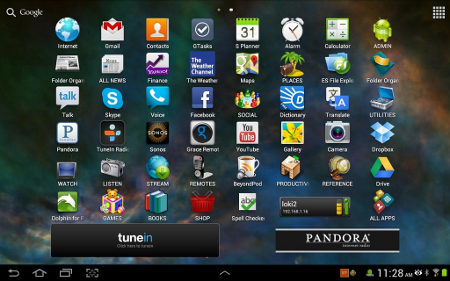 The screenshots below show the contents of the tablet’s 14 apps-by-category homescreen folders, which I label with all-upper-case names so it’s easy to tell folders from app-launchers on the homescreen.

Contents of the homescreen folders
(click images to enlarge)

One great feature of Android is that you can install alternative onscreen keyboards. Samsung has already substituted its own Samsung Keyboard for the standard Android keyboard; the Samsung alternative has much in its favor, including a stylish appearance and a pen-enabled handwriting recognition option. However, I still prefer the alternative Hacker’s Keyboard over both the Samsung and standard Android virtual keyboards, based on its inclusion of cursor positioning keys, Function keys, and specialized keys such as Ctrl and Esc. The two keyboard alternatives are demonstrated in the screenshots below.

And then there’s the excellent Google Voice Typing capability that’s built into Android 4.x. It can go along way toward easing and accelerating the process of entering text on your tablet — just be sure to proof read what it types, since some potentially embarrassing goofs will occasionally occur! 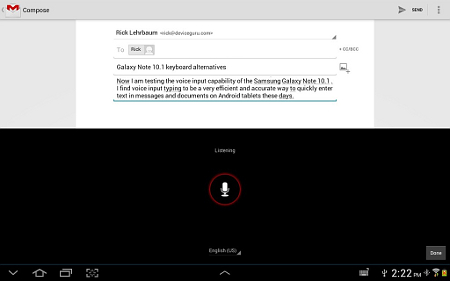 Despite all these virtual keyboard alternatives, I much prefer typing with a Bluetooth keyboard when I’m seated at a table or desk. Here are two keyboards that I’ve used successfully with the Galaxy Note 10.1. 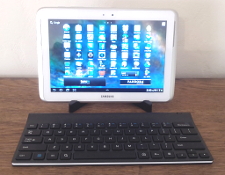 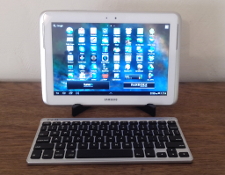 The keyboards shown above are the Logitech Android keyboard and the Zagg ZaggKeys Flex. Both work well.

So what’s my overall impression of the Galaxy Note 10.1, after using it for several weeks and comparing it to several other 10-inch Android tablets?

Here’s a list of the Galaxy Note 10.1’s principal pros and cons…

On balance, the Galaxy Note 10.1 offers excellent performance and a market-leading set of features, with the exception of its 1280×800 display. To justify the tablet’s premium pricing you’d need to really care about its sophisticated pen-input capabilities. Otherwise, the Galaxy Note 10.1 is overpriced relative to the Nexus 10, which boasts a gorgeous 2560×1600 (300ppi) IPS display.

If Samsung plans to continue offering a line of high end, pen-oriented Android tablets, the company needs to upgrade the line’s display resolution asap. That said, I wouldn’t be surprised to see the arrival of a “Galaxy Note 2 10.1” early in 2013, followed by a price reduction of today’s model by about $100, bringing it line with other current 10-inch Android tablets.

For more details on the Galaxy Note 10.1, including full specs and further descriptions of its pen and multi-windowing capabilities, visit these pages on Samsung’s website: