How many of us leave our PCs running all day long, even when we’re not using them? Despite the fact that today’s desktop and laptop PCs and their OSes provide extensive power management functions, most PC users don’t bother to use them to shrink their systems’ carbon footprints.

According to an online survey conducted by the Climate Savers Computing Initiative, 55 percent of 7,274 respondents don’t take advantage of their PCs’ power management functions, such as suspend/resume shut-down options and performance profiles.

On the bright side, of those not already using power management, nearly all (97 percent) said they’d like to begin using their systems’ power-saving capabilities. According to the Initiative, each of these users stands to reduce their carbon footprint by nearly half a ton of CO2 annually, not to mention saving $60 or more in energy costs per year.

In general, laptop users are much more likely to employ shut-down modes such as sleep (suspend-to-RAM) or hibernate (suspend-to-disk) than are desktop PC users. After all, these functions originated as a way to extend a mobile computer’s battery operation.

However, over the past several years virtually all new PCs — including desktop-style models — and their operating systems have begun supporting enhanced power-management features, including laptop-style sleep and hibernation shut-down modes, based on PC power management standards such as the Advanced Configuration and Power Interface (ACPI).

How much will this help? The Climate Savers Computing Initiative estimates, for example, that broad industry compliance with the U.S. Government’s Energy Star 4.0 guidelines will yield savings in excess of $1.8 billion in energy costs over the next 5 years, and reducing greenhouse gas emissions by an amount equivalent to the annual emissions of 2.7 million vehicles.

Nobody wants to wait for Windows to cold boot!

In DeviceGuru’s experiments, a 2.4GHz Celeron-based Windows XP system took about two minutes to arrive at a ready-to-use Windows Desktop, starting up from cold boot, as did Vista on the Black Tower. The latest version of Ubuntu Linux on the Black Tower, on the other hand, came up and was ready for action in about 60 seconds.

While PC startup times of one or two minutes aren’t terrible, in today’s fast-paced world it’s no surprise that users are unwilling to power their systems off and on every time they leave from and return to their desks!

Fortunately, however, virtually all modern PCs — be they desktops or laptops — and their operating systems support sleep and hibernate suspend/resume modes as an alternative to powering the systems completely off and on.

In DeviceGuru’s tests, returning from sleep (suspend-to-RAM) was fast in all cases — around 5 seconds for Windows and 10 seconds for Linux. With such quick resume speeds, it’s not that difficult to get into a habit of “sleeping” your desktop or laptop PC before you leave your desk.

Here are screenshots of the shut-down options for Linux (specifically Kubuntu), Vista, and Windows XP Pro: 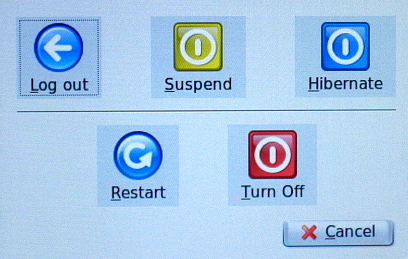 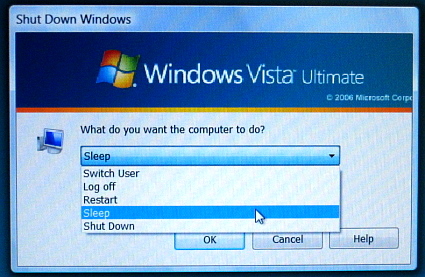 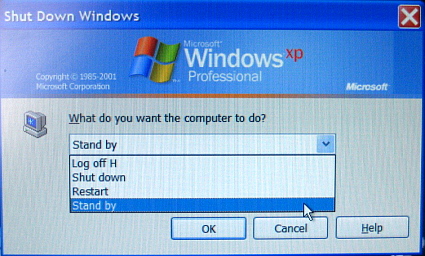 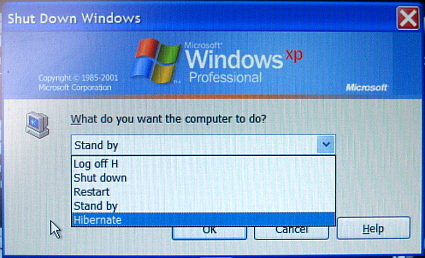 Putting your PC to sleep when you’re not using it for a while isn’t the whole story. Quite a lot of energy is also consumed by a desktop monitor as well as by printers, scanners, WiFi routers, and the like.

Below is a table showing DeviceGuru’s observations for PCs, monitors, and a group of three Internet edge devices (DSL modem, D-Link WiFI router, Linksys firewall/router). The power shown in the “On” column represents quiescent states for each device — i.e. when the computer’s desktop is visible but no applications are in use, when the printer is on but not printing, etc.

Taking this a bit further, to help individuals and businesses effectively conserve on energy consumed by PCs and peripherals, the Climate Savers Computing Initiative has created the following list of the top 10 priorities:

The Climate Savers Computing Initiative bills itself as “a nonprofit group of eco-conscious consumers, businesses, and conservation organizations dedicated to reducing the energy consumption of computers.”

According to the group, over 175 companies and organizations have joined the Initiative since its June 2007 launch, “and thousands of individuals have pledged their support.” Prominent backers of the Initiative include Dell, EDS, Google, HP, Intel, Lenovo, Microsoft, PG&E, and the World Wildlife Fund.

Here are a few links to further information:

Incidentally, DeviceGuru.com is an Affiliate member of the Initiative. Maybe your company or organization would like to join in the effort?


13 responses to “Top 10 ways to save PC computing energy”