[Updated Aug 25, 2012] – Before launching into this review, which pits Samsung’s Galaxy Tab 10.1 against Apple’s iPad 2, I took a few days to familiarize myself with the Galaxy Tab’s Android 3.1 (“Honeycomb”) OS. The thing is, I’d already used iOS on an iPod Touch for two years, but was a rank newbie when it came to Android.

Unfortunately, after configuring the Galaxy Tab 10.1 to my liking, installing apps from the Android Market, and becoming accustomed to its operation, it dawned on me that I’d allowed myself to slide down a slippery slope into an Android Abyss from which there would be no escape.

Apple’s obsession with tightly controlling everything in and around its products imposes a high level of rigidity in the look, feel, and functionality of the iPad. Consequently, all iPads are essentially identical, beyond the wallpapers and apps their owners install on them.

In contrast, thanks to Android’s greater empowerment of its apps, I was easily able to mold the Galaxy Tab 10.1 into a highly personalized tablet experience, and do things on it that I haven’t a clue how to accomplish on an iOS device. 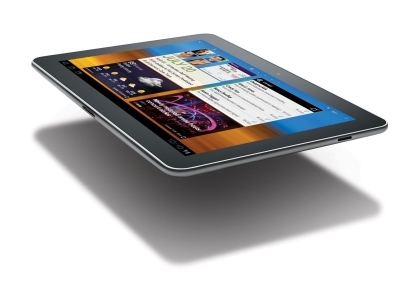 Now, that’s not necessarily best for everyone. In fact, Apple’s more tightly constrained systems are generally credited with being more stable and less prone to hardware/software and OS/app incompatibilities and mishaps, than less restricted systems. But if you value flexibility, configurability, and the ability to control many characteristics of your device — like I do — Android may be a preferred platform.

Overall, both 10-inch tablets have a similar look and feel, and they implement comparable features. These include:

Deciding between the alternatives

In light of their price parity — the Galaxy Tab 10.1 and iPad 2 each cost $400 (as of March 2012) — and the fact that the iPad is more mature and commands substantially more marketshare than all 10-inch Android tablets combined, most consumers will likely select the iPad over the Galaxy Tab 10.1. To be sure, the iPad does everything most consumers want, and does so to near-perfection.

On the other hand, if you want greater control over your tablet environment, more openness to non-Apple standards (such as Adobe Flash), or greater ability to adapt to new technologies and standards as they emerge, the Galaxy Tab 10.1 could be the better option.

But don’t decide yet! Below you’ll find…

Comparison of features and specs

Now, for a few observations regarding various Galaxy Tab 10.1 characteristics and functions….

Here’s a look at the Galaxy Tab 10.1’s default lock and home screens, based on its original Android 3.1 OS:

And here they are after customizing the home screen wallpaper and adding various apps from the Android Market:

This next group of screenshots shows the Galaxy Tab 10.1’s new default home screen and user interface characteristics after its mid-2012 firmware upgrade to Android 4.0:

Starting from the tablet’s August 2011 TouchWiz and continuing with its mid-2012 Android 4.0 upgrade, the Galaxy Tab 10.1 features pop-up “mini apps,” which can be positioned where desired on the screen. They remain in the foreground — in front of normal apps — until you close them.

The following two sets of screenshots compare the primary home screens of the Galaxy Tab 10.1 (left pair) and iPad 2 (right pair) after each tablet has had its home screen wallpaper modified and a screen or two of apps installed. See if you can spot some interesting differences…

A few noteworthy differences in the home screens and icons include:

Personally, I prefer the Galaxy Tab 10.1’s higher density of app icons to the iPad’s “airy” approach. It’s a more efficient use of home screen real estate, and it lessons the need for scrolling among multiple screens to locate a desired app.

In fact, with the addition of home screen folders, courtesy of Fabio Collini’s awesome Folder Organizer app, or using the folder capability built into the tablet’s mid-2012 Android 4.0 firmware upgrade, you can have your cake and eat it, too, by combining the high density of the Galaxy Tab 10.1 homescreen’s 56-icon home screen layout along with iOS-like app folders.

Of the three alternatives shown above, I’ve settled on combining custom folder icons along with a mix of both standard and custom app icons. Since, in this approach, both single apps and folders have similar-looking icons, I’ve adopted the convention of capitalizing folder labels and using upper/lower case for app labels, making it easy to distinguish folders from apps. This works well, although you might prefer using iOS-style transparent folder icons, which clearly look like folders since you can see tiny app icons within them.

Using this approach, I can quickly and easily access more than 250 installed apps within one or two taps, from a single primary home screen. Not only that, but there was enough space to include Pandora, TuneIn Radio, and WiFi Manager widgets. Here’s how that looks… 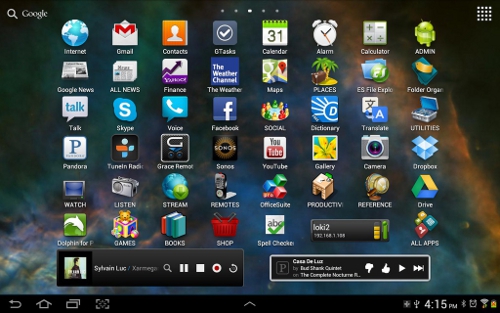 Accessing hundreds of installed apps from one home screen containing a combination of app and folder icons
(click image to enlarge; screenshot reflects the Android 4.0 update)

On the other hand, the approach of using transparent Folder Organizer widgets also has appeal. Using that method, the 112 apps easily fit on two home screens within boxes. Here’s how they look: 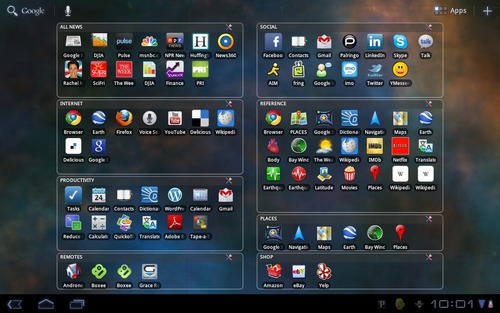 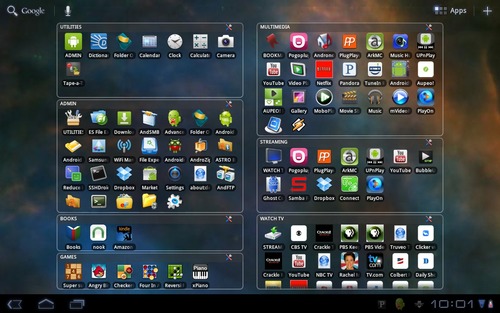 Incidentally, a few Folder Organizer features illustrated in the screenshots above require use of the paid version of the app. It’s well worth its sub-$2 price, but there’s plenty of functionality included in the free version. The paid version drops the not-very-bothersome ads and provides a few additional features, such the ability to organize folders within folders.

Having come to the Galaxy Tab 10.1 with an iPod Touch perspective, I expected to have to download Android apps for most of what I’d want to do. It turns out, however, that as a result of moving from a 3.5-inch screen to a 10-inch screen, many websites become quite usable without requiring dedicated apps for accessing them.

So unlike on 3.5-inch tablets, it’s not so critical to have dedicated apps for accessing YouTube, Facebook, Twitter, Weather.com, Amazon (yes, you can watch videos), your Netflix.com queue [update: a Netflix app is now available], Google Documents, and many other sites and services. All these can be accessed using Android’s browser, although dedicated apps such as Android’s superb YouTube app (see screenshots below) can certainly raise the user experience to a whole new level.

In fact, many apps that support both 3.5- and 10-inch tablets don’t scale up well to the larger-sized screens. Notable Android examples of this problem include Skype. Pandora, Pogoplug, Dropbox, Dictionary.com, and many utilities such as file managers, task managers, etc. Although they work, their fonts and layouts don’t adapt intelligently to the larger screens.

iOS handles the scaling-up of iPhone apps to the iPad in a more elegant manner, with a “2X” button that “magnifies” the app’s display rendering so it fills the iPad’s full screen. The iOS Skype app, shown in the screenshots below, uses that technique.

This approach tends to produce a more readable display than simply spreading a smartphone-sized app out over the much larger tablet screen, which fails to enlarge fonts.

In response to a reader’s question in the comments below, I tested both the Galaxy Tab 10.1 and iPad 2 (wifi-only versions) to see how long they take to charge their batteries from empty to full. The charging tests were performed with each tablet turned off and connected to its standard charger.

So it looks like the Galaxy Tab 10.1 charges up a bit faster than the iPad 2, although not enough to be significant.

On the other hand, during continuous Netflix video streaming on each tablet, with their displays set to maximum brightness, the iPad 2’s battery outlasted the Galaxy Tab 10.1’s by about a 35-40 percent.

Of course, during normal daily use — consisting of a mix of web browsing, email reading/writing, listening to streaming music, etc. — you can expect considerably longer battery life, particularly if you set your tablet’s screen brightness to automatic, or at least somewhere below maximum brightness.

The screenshot index below provides access to more than 200 screenshots, which illustrate numerous aspects of the Galaxy Tab 10.1’s UI, home screens, applications, and more. Click each category title to view the associated screenshots. If you prefer, you can access the entire Galaxy Tab 10.1 Screenshot Tour here.

Below are my main compliments and complaints concerning the Galaxy Tab 10.1 and its Android 3.1 (Honeycomb) OS, following several weeks of daily use.

So which is better, Samsung’s Galaxy Tab 10.1 or Apple’s iPads? The answer depends a lot on your point of view and priorities.

In my tests, the Galaxy Tab 10.1 was more successful than the iPad at streaming video directly from websites, due to its support for Adobe flash. On the other hand, the Galaxy Tab 10.1 has fewer tablet-aware apps than the iPad. [Update: When this smackdown was first published I listed Netflix and Crackle as two good examples of apps missing from Android, but as of March 2012 excellent tabletized Android apps are available for both.]

With the growing penetration of Android in the smartphone and tablet markets, we can expect the app gap — not terribly big even today — to begin to close over the next six months or so. For sure, Apple’s App Store will have more apps than the Android App Market for quite a while, but who really needs more than the 200,000 apps that are there today? As far as these 10-inch tablets are concerned, the more important issue is the availability of apps that scale up well to the larger screen sizes, and that’s a problem for both the Apple and Android tablets.

So I guess my bottom-line advice is this: at price parity, the iPad is probably a better bet for the average user, since it’s a more stable, near-perfect device with a rich assortment of apps for nearly every possible function you’d like to perform on your tablet. Therefore, unless you’ve got a grudge against Apple for some reason, or are enamored with the idea of having a more configurable tablet, there’s not a lot of justification to go with the less mature, less established device at the same price.

Personally, I really enjoy the fun and challenge of having a more flexible, open platform on which I can exert greater influence over what it does and how it operates. For those reasons, the Galaxy Tab 10.1 has become my tablet of choice. But then, that sort of DIY attitude should come as no surprise to DeviceGuru’s readers!

Check back periodically for further updates to this article, and feel free to join the continuing extensive discussion in the comments area below.