[Updated Dec 10, 2012] — This post takes an in-depth look at Samsung’s Galaxy Tab 2 7.0, which hit the market about six months ago. In addition to a fairly detailed screenshot tour, we examine how the Samsung tablet’s features and specs compare to those of the 7-inch tablets recently introduced by Google, Amazon, and Apple.

The photos below show the front and rear of the device in portrait mode. In the rear view, you can see the camera lens. 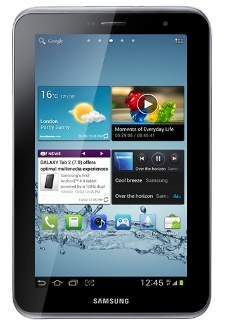 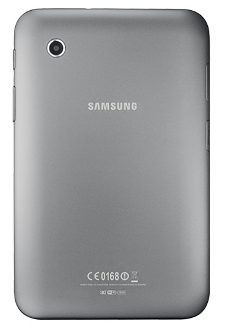 Samsung Galaxy Tab 2 7.0 front and back
(click images to enlarge)

The Galaxy Tab 2 7.0 was basically a minor redesign of the company’s prior 7-inch Android tablet, the Galaxy Tab 7.0 Plus. The key changes from the earlier model included:

The table below shows how the Samsung Galaxy Tab 2 7.0, Google Nexus 7, Kindle Fire HD (7-inch), and iPad Mini stack up against each other from a features and specs perspective.

Although the iPad Mini is included in the comparison table, bear in mind that the Apple and Android tablets run entirely different operating systems. Any realistic tablet comparison can’t just be about hardware, but tabulating software tradeoffs would be like trying to summarize the pros and cons of the world’s great religions. And as with religion, debates about OSes tend to get very personal!

When you first turn on the Galaxy Tab 2 7.0, you’re presented with a quick series of easy-to-understand setup screens, as shown in the screenshots below.

Once the setup process is completed you can add apps, widgets, or folders to the tablet’s homescreens, and you can increase or decrease the number of active homescreens. It’s easy to change the homescreen and lockscreen backgrounds by long-pressing a blank area of the homescreen and selecting one of the options presented (Gallery, Live wallpapers, Wallpapers). I have a favorite NASA nebula image that I always use.

Although you can’t substitute custom images for folders, the folder function lets you drag as many app launchers into a folder as you want. The folders display up to 12 icons at a time in portrait mode, or 16 in landscape mode, and you can scroll them to see any others beyond that quantity. 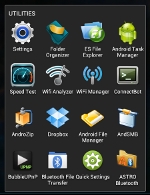 Adding simple folders to the homescreens is a snap

It’s easy to transfer files to and from the Galaxy Tab 2.1. The easiest method is by pluging the USB end of the tablet’s charging/interface cable into a PC or Mac and simply draging/droping files to or fro by means of the Windows or Mac file manager. Other ways to transfer files include:

Yet another method involves the use of Samsung’s USB socket adapter (pictured below), which plugs into the multipurpose connector on the bottom of the tablet and provides a USB device socket that can be used with USB peripherals such as thumbdrives. You can even use the USB socket adapter for connecting external peripherals such keyboards and mice, but unfortunately printers are not supported.

Although the tablet’s Android 4.0 OS includes a basic homescreen folder capability, as discussed above, I greatly prefer the highly flexible and full-featured Folder Organizer app, which is available free from Google’s Android apps market.

A few advantages of Folder Organizer over the tablet’s default folder function are that you can put both app-launchers and bookmarks in folders; you can assign custom icons to folders, app-launchers, and bookmarks; and there are multiple options for how the items within folders are sorted (most-used, alpha-sorted, etc.). All-in-all, Folder Organizer can create a much more personalized result. 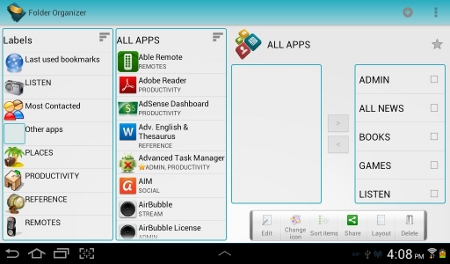 The screenshot below shows the tablet’s finished homescreen, which contains 16 folders, 13 app-launchers, and one widget, which provides one- or two-click access to all 150+ apps installed on the device. Note that I use custom icons for folders, for easy identification; additionally, I capitalize their names to distinguish them from app-launchers and bookmarks. 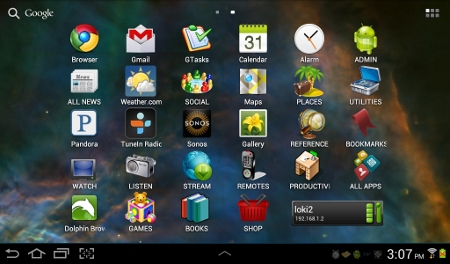 The following screenshots show the contents of 14 of the completed homescreen’s 16 folders. The other two contain “all apps” and “all bookmarks.”

In case you were wondering, yes, you really can do “real work” on the Galaxy Tab 2 7.0, particularly given its ability to be used with external Bluetooth or USB keyboards.

Samsung bundles Polaris Office version 4.0 with the tablet. In addition to that, I added Office Suite Pro, which at the time was on sale for 99 cents in Google’s Android app market. Both apps let you read, edit, and create Microsoft Office-compatible text, spreadsheet, and presentation documents, and both give you the ability to access and store your documents on DropBox and Google Drive cloud storage.

The screenshots below offer a glimpse of each app’s capabilities.

Another useful mobile productivity app is LogMeIn, with which you can access remote Windows desktops and even run Windows programs remotely. The screenshots below show the Galaxy Tab 2 7.0 being used for creating an Open Office spreadsheet and browsing the Web in Firefox on a remote Windows 7 desktop.

You can see the names of the other 33 productivity apps located on the tablet in the screenshot below, which shows the contents of the homescreen’s Productivity folder. 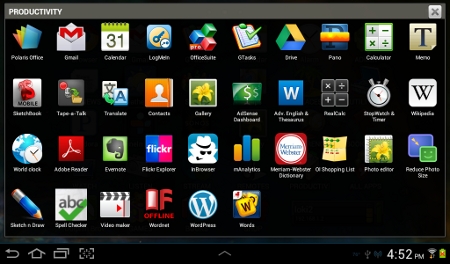 With its crisp, bright screen, the Galaxy Tab 2 7.0 is a super tool for consuming content relating to both work and leisure interests. However, the relatively small onscreen keyboards of 7-inch tablets tends to limit the speed and accuracy with which you can generate documents or write emails. Mercifully, there multiple ways to surmount this problem on the Galaxy Tab 2 7.0.

The best solution is to add a generic or Android-specific external Bluetooth keyboard, such as the one shown in the left photo below (photo source). 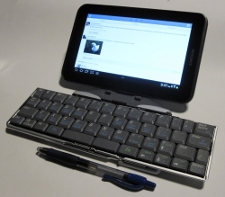 Alternatively, you can connect most any USB-interfaced mobile keyboard via the tablet’s optional USB socket adapter. The photo on the right, above, shows the tablet being used with an HP wireless mini keyboard, interfaced via the keyboard’s tiny USB wireless adapter (click the image to see more detail). One nice aspect of the HP mini keyboard is its inclusion of a tiny trackball in its upper right-hand corner.

You can also install alternative keyboards via apps from Google’s Android market. The Hacker’s Keyboard, shown below, adds cursor keys, an escape key, and a mode with function keys and a numeric keypad. 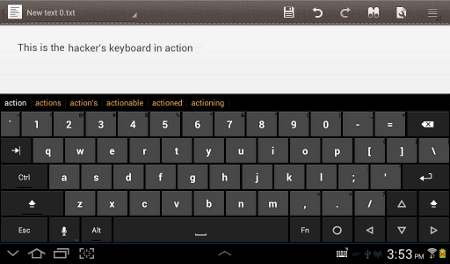 Another alternative text entry method is “Google Voice typing,” which works surprisingly well. You can launch that mode from the microphone icon in the bottom row of the Hacker’s Keyboard. Speak slowly and clearly, and it can really speed up your text entry on the tablet.

What else is this tablet good for?

Although I’ve focused primarily on setting up and configuring the Galaxy Tab 2 7.0 for productivity purposes, there’s a whole lot more you can do with it, as you’ll see by examining the contents of the 14 homescreen folders shown in earlier.

For more details on the many other tricks the tablet can perform, check out the comprehensive Galaxy Tab 2 7.0 screenshot tour that accompanies this review. There, you’ll find more than 300 screenshots showing apps for: device control and file management; watching or reading the latest news; viewing movies and TV episodes; enjoying your favorite music genres and Internet radio; keeping up with the latest news; text messaging and voice/video communications; social networking; reading ebooks; playing games; …and lots more.

The list below provides quick access to the screenshots in the tour by category. Be sure to return here for the remainder of this article, which includes a summary of the pros and cons of the device along with some general conclusions. 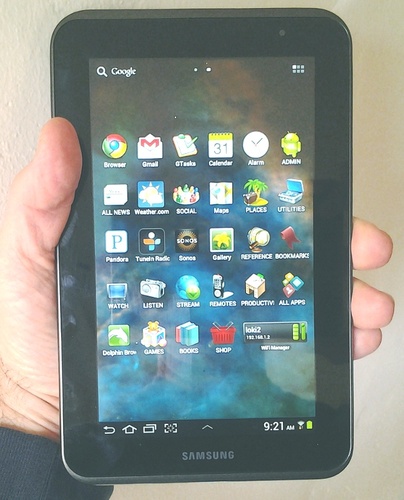 Samsung’s Galaxy Tab 2 7.0 is easy to hold in one hand
(click image to enlarge)

In my judgement, the Galaxy Tab 2 7.0 has a lot going for it. Here’s a quick rundown of its pros and cons…

In conclusion, despite having been around for about six months, the Galaxy Tab 2 7.0 still compares favorably, given its currently discounted price, with the recently introduced 7-inch tablets from Google, Amazon, and Apple. It’s a great mobile companion for both work and pleasure.

On the other hand, if you don’t need to take pictures using your 7-inch tablet (maybe your smartphone has a decent built-in camera?), the Google Nexus 7 16GB model might be a better choice based on its higher resolution display and higher performance CPU.

For further details on the tablets discussed in this post, go here: