[Updated Nov 30, 2012] – This highly detailed review introduces Google’s first Android tablet: the Nexus 7, made by Asus. After briefly comparing the device’s features and specs to those of several other leading 7-inch tablets, we’ll examine the Nexus 7’s Android 4.2 (aka “Jelly Bean”) user interface, and then demonstrate a selection of useful Android tools and apps for system management, communications, social networking, media streaming, entertainment, and productivity.

Three views of the Google Nexus 7
(click images to enlarge)

Comparing the Nexus 7 to other leading 7-inch Android tablets

Wondering how the Nexus 7 stacks up against its principal competitors? The table below compares the key specs and features of the Nexus 7 to the Samsung Galaxy Tab 2 7.0 and Amazon’s two second generation 7-inch Kindle Fire models.

From the data in the table, two quick observations come to mind:

When you first boot up the Nexus 7, you’ll be guided through a few simple configuration steps, after which you’ll arrive at the tablet’s two default homescreens (shown below).

Tapping the widget in the middle of the dock at the bottom edge of either homescreen switches the display to the all-apps and all-widgets view. In the leftmost screenshot below, you can see icons for each of the 28 apps that were preinstalled on my Nexus 7. The other two screenshots show 12 of tablet’s 26 preinstalled widgets.

Swiping up from the bottom of any app or home screen initiates a google search (see below). Once there, you can type your search keywords using the onscreen keyboard; alternatively, you can say the word, “google” and then continue using the tablet’s voice recognition function to enter the search keywords.

Swiping up starts a google search,
with an automatic voice input option
(click images to enlarge)

Alternatively, swiping down from the top of any screen opens up the system’s status panel, where you can see various messages and status indicators (see below). Once you’ve viewed the messages, you can tap the staircase-like icon in the upper right-hand corner of the status panel to clear the list of messages.

The screenshots below show the Nexus 7’s built-in folder-creation function, with which you can create folders by dragging one app-launcher onto another. The method and results are reminiscent of the iPad’s folder function, but in the Nexus 7’s case you get a round, transparent folder containing an overlapping stack of icons.

Creating folders on the homescreens
(click images to enlarge)

Making it your own

Despite the avant-garde look of the Nexus 7’s default folder icons, I prefer greater folder customization flexibility available with the third-party Android Folder Organizer app. In addition letting you assign custom icon images to each folder, the app includes a choice of folder themes, a tool for quickly assigning apps to one or more folders, and a utility for backing up and restoring your custom folder settings once you’ve set them up.

These are the resulting lockscreens and homescreens:

Thanks to Folder Organizer, I can quickly and easily access all 200+ apps that are installed on my Nexus 7 with one or two taps from a single homescreen (shown above). To accomplish this, I populated the main homescreen with 14 category folders (labeled in upper case), 14 launchers for favorite apps (labeled in upper/lower case), and one 1×2 widget for quick WiFi access point selection. I dedicate a secondary homescreen to a handful of widgets (also shown above).

The Nexus 7’s Android 4.2 OS offers numerous ways to move files in and out of the device. Of course, you can transfer files easily, via usb, between the tablet and desktop or laptop PCs or Macs. Increasingly, however, I find myself using wireless, rather than wired, methods — and to or from a growing set of remote locations. These include the tablet’s internal flash storage, Windows shares, other Bluetooth-enabled devices, and cloud services such as Dropbox, Google Drive, Box, and Sugarsync.

ES File Explorer, one of my all-time favorite apps, merges nearly all these file transfer locations into a single wireless multiverse, as seen below.

With its crisp, bright screen, the Nexus 7 is a super tool for consuming content, relating to both work and leisure interests. But what about generating content, including typing and editing documents?

As you might expect, the relatively small onscreen keyboards of 7-inch tablets limit the speed and accuracy with which you can type and edit documents or emails. However, there are several ways to circumvent this problem on the Nexus 7.

Numerous soft-keyboard alternatives to the standard Android onscreen keyboard are available from Google’s Android market. Of those, my favorite is the Hacker’s Keyboard (shown below). It adds cursor keys, an escape key, function keys, a numeric keypad, and more.

Another alternative text entry method (also shown above) is “Google Voice Typing,” which works surprisingly well. You can launch that mode from the microphone icon in the bottom row of the onscreen keyboard, or via the search widget at the top of the tablet’s homescreens.

Speak slowly and clearly, and it can really speed up your text entry on the tablet. Google Voice Typing currently responds to several verbal punctuation commands, including “comma,” “period,” “exclamation mark,” “question mark,” and “colon.” But pay close attention to what it types, as you’ll occasionally spot some amusing (or potentially embarrassing) results!

Despite the Nexus 7’s great voice-typing feature, if you need to enter a lot of text efficient, you’ll probably want to use your tablet in conjunction with a Bluetooth keyboard, such as the one shown below. 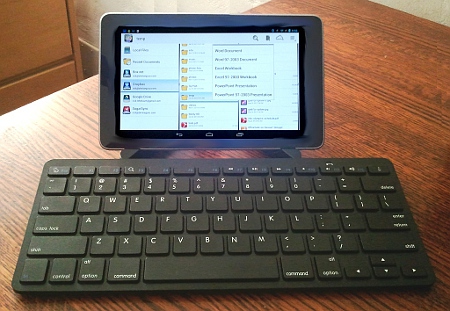 Stocking up on apps

The Nexus 7 is a super device for browsing the web, watching videos, listening to music, playing games, reading ebooks, and much more. Let’s explore some cool Android apps that can equip the Nexus 7 for personal information management, travel, entertainment, and productivity, among other pursuits.

The screenshots below show the contents of the 14 Folder Organizer folder widgets on my Nexus 7’s primary homescreen. Each folder contains a category of apps, which I configured as: Admin, Utilities, Social, Places, Reference, Productivity, Watch, Listen, Stream, Remotes, Games, Books, and Shop.

Click these thumbnail images to see which apps are available in each folder:

For screenshots showing the operation of several key Nexus 7 and third-party apps and utilities, follow the links in the Nexus 7 Screenshot Tour index below. (For the complete tour, all on one page, go here.)

The Nexus 7 has a lot going for it. In particular…

On the other hand, it has a couple of significant deficiencies. Namely:

Other than those two biggies, there are a few minor drawbacks worth noting:

So overall, how does Google’s Nexus 7 stack up against Samsung’s Galaxy Tab 7.0 and Amazon’s Kindle Fire HD?

To help answer that question, I’ve summarized their key pros and cons in the table below.

Which is best for you? That depends on how you rank the ways in which they differ. For example…

Personally, I prefer the larger size of Samsung’s Galaxy Tab 10.1 or Galaxy Tab 2 10.1 to any 7-inch tablet for most purposes. But as far as 7-inch tablets go, I lean toward the Nexus 7 for four reasons: snappy, quad-core performance; latest Android 4.2 OS; lightest weight along with a comfortable rubberized rear surface.

Additional Nexus 7 technical and functional details are available from Google and on Wikipedia.

6 responses to “An in-depth Nexus 7 review”