Launched in October of 2004, Linux Mint has rapidly emerged as one of the most popular desktop Linux distributions. In this review, DeviceGuru takes a look at the latest Linux Mint release and finds it to be preferable to Ubuntu (on which it’s based) in several significant ways.

Linux Mint’s website claims Mint to be “the fourth most widely used home operating system behind Microsoft Windows, Apple Mac OS, and Canonical’s Ubuntu.” While the evidence behind that claim is unspecified, data from Google Insights for Search does indicate Linux Mint to be the most popular of what DeviceGuru has dubbed the “newer second tier distributions.” Additionally, Mint currently ranks third among Linuxes of all types — behind only Ubuntu and Fedora — on DistroWatch.com‘s “Page Hit Ranking” list (see hand-hand column of DW’s home page).

The Linux Mint project attributes its distribution’s success to these factors:

The distribution is available in several minty flavors, depending on the choice of desktop environment. While the main version is based on GNOME, live CD spins based on KDE, Xfce, Fluxbox, and LXDE are also available for download.

We’ll examine the GNOME version in this post. But first, a bit of background…

At the risk of oversimplification, Linux Mint could be summed up as a Ubuntu derivative with…

Notably, the last point in the list enables the ability to immediately run flash and play YouTube, DVDs, MP3s, MPEGs, and many other types of media without further configuration.

On the other hand, Mint uses standard Ubuntu kernels and its major updates mirror those of Ubuntu, as indicated in the flow chart at the right (click image to enlarge; diagram source).

Accordingly, Mint appears on Ubuntu’s “ecosystem” page, categorized as one of the “known derivatives [that] have not yet chosen to work with the Derivative Team.” Of course Ubuntu, in turn, draws most of its packages from the venerable Debian GNU/Linux project, so both Ubuntu and Mint are also Debian derivatives.

In a recent email to DeviceGuru, Linux Mint founder Clement Lefebvre characterized the relationship between Mint and Ubuntu as, “the desktop is quite different, the base is almost exactly the same.” But, he added, “we’ve been working on Mint since 2006 and [are] introducing more and more differences every day.”

Incidentally, there’s also a brand new version of Linux Mint, released earlier this month, based on Debian’s kernels and packages rather than on Ubuntu’s bits. “Linux Mint Debian Edition (LMDE) comes with a Debian base, which we transformed into a live media and on top of which we added a new installer,” says the project on its blog. It’s available in the form of a 32-bit live-DVD with a GNOME desktop. “The purpose of LMDE is to look identical to the main edition and to provide the same functionality while using Debian as a base,” adds the blog post. “It’s rougher and in some aspects not as user-friendly as our other editions,” but the big advantage of it is that it “brings us one step closer to a situation where we’re fully in control of the system without being impacted by upstream decisions.” DeviceGuru will have a look at this new Linux Mint sibling soon.

For this review, we installed the “standard” 32-bit version of Linux Mint 9, codenamed “Isadora,” which comes on a single live-CD. Its installation wizard is essentially identical to Ubuntu’s, other than theming aspects. These screenshots show the quick and easy process involved:

The screenshots below show how Mint’s desktop and menus look immediately following the OS’s installation from the live-CD. Although they’re built with the same basic GNOME desktop environment, Mint’s desktop differs from Ubuntu’s (screenshots here) in the following ways: 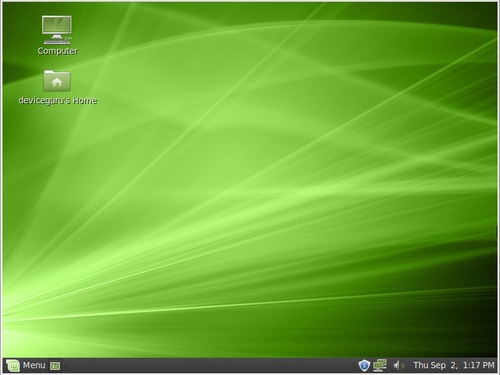 One of the things all Linux implementations are noted for is how easily and extensively they may be personalized. In this regard, Linux Mint is no exception. Everyone’s tastes naturally differ and although I’m impressed with many of Mint’s differences from Ubuntu, I personally don’t care for Mint’s green desktop and theming. So despite these green bits being a Linux Mint tradmark of sorts, I immediately set about removing most of them.

One notable exception is that I retained the Mint-menu icon at the left edge of desktop’s panel, out of respect for the great work the project has done and because it truly “brands” the distribution.

The three simple tweaks listed below tailored Mint’s desktop and theme to my liking. All were accomplished easily, using readily available functions and downloads. 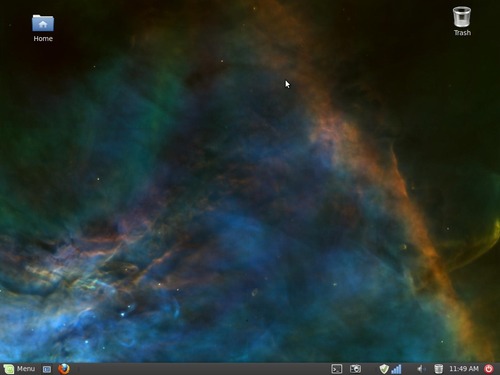 Additional characteristics of the nifty Shiki-Brave theme are shown in the following screenshots:

I’m so pleased with the shiki-brave theme that I’ve installed it on my Maverick (Ubuntu 10.10) desktop, too.

Adding some favorite apps and tools

Linux Mint comes standard with a well-chosen selection of applications and utilities. But, as already noted, everyone’s needs, interests, and tastes differ, so invariably you’ll want to make the system your own by downloading additional packages. You can do this using Mint’s user-friendly Software Manager, with the more nuts-and-boltsy Synaptic Package Manager, or by means of apt-get or aptitude on the command line.

Several apps I chose to add initially are worthy of note. Since Linux Mint uses Ubuntu Linux kernels and draws most of its packages from Ubuntu’s repositories, it seemed reasonable to expect both Ubuntu and Debian apps to work on the system. In fact, every “Ubuntu compatible” package I downloaded directly or grabbed via either apt-get or Synaptic installed easily and worked as advertised (with one minor exception, as noted below).

If you like Pandora (personally, I’m somewhat addicted to it), it’s worth subscribing to “Pandora One” for a modest annual fee ($36, last time I renewed). As a Pandora One subscriber, you can stream music from Pandora without an hours-per-month limitation, and without having your musical pleasure occasionally interrupted by annoying ads. Subscribers also get to download the lightweight Pandora Desktop app, which makes it easy to stream Pandora while working, messaging, writing emails, or browsing the web from your Linux desktop.

The screenshots below show the process of downloading, installing, and using the Pandora Desktop app on my Mint system.

And then there’s Boxee, the free Internet A/V-streaming software platform with an easy-to-use “10-foot UI” (user interface). What can I say about Boxee that hasn’t already been said?

Since Linux Mint seemed a good candidate for powering media center PCs, I wanted to verify that Boxee ran properly on it. (Note: Don’t get too carried away with this idea if you’re big on streaming Netflix videos, though. No desktop Linux distributions currently satisfy Netflix’s DRM requirements, contrary to what’s being done device makers on systems such as Roku’s A/V streaming box, which runs a highly custom embedded Linux OS.)

To see how well Boxee would run on Mint, I downloaded it from Boxee’s website. With about three mouse clicks, it installed automatically, courtesy of Mint’s GDebi Package Installer as shown in the screenshots below.

Following the installation, Boxee worked fine, with one small exception. Sometimes after quitting Boxee, it couldn’t be started again without first manually killing a persisting Boxee process. However, by running Boxee from the command line and watching for error messages I discovered that the exact same problem has been found to occur Ubuntu 10.04 — so apparently it’s not Mint’s fault.

Incidentally, to see how well Linux Mint would play on an HDTV, I routed my system’s HDMI output to one of my Sony LCD TV’s HDMI inputs. It synced up perfectly, with full 1080p resolution and no discernible problems. It also properly transferred audio along with video to the TV over the HDMI connection, just like you’d want. Sweet!

All this and Ubuntu Tweak, too

As I mentioned in my recent review of the Ubuntu 10.10 beta, Ubuntu Tweak is a worthwhile addition to any Ubuntu system. Its benefits include:

In light of these benefits, after every new Ubuntu installation I perform nowadays, I fire up Firefox, head over to Ubuntu-Tweak.com, and download/install Ubuntu Tweak. Curious whether Ubuntu Tweak would work with Linux Mint, I installed it in the usual manner and took it for a spin.

Incidentally, Mint by default includes many of the capabilities offered to Ubuntu by Ubuntu Tweak. With that in mind, I emailed Mint founder Clement Lefebvre to ask whether there was any interest in integrating Tweak’s full functionality into Mint. He replied, “Ubuntu-tweak has been discussed and some of its features will make their way into Mint.”

I certainly hope so, but in the mean time I can confirm that Ubuntu Tweak seemed to install and run fine on Mint. Here’s a screenshot of it running on my Mint system: 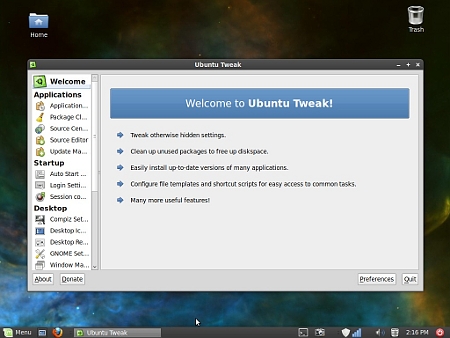 Although the screenshots below show a few more Ubuntu Tweak functions, the program is quite extensive and these only intended to provide a taste of what it has to offer.

After installing and using Linux Mint on and off for a week now, I’ve concluded that it shows great promise as an alternative to Ubuntu for many users.

Here are a few observations, in the form of Linux Mint pros and cons, relative to Ubuntu:

Certainly, there are numerous additional pros and cons that I haven’t considered or discovered, so I look forward to reading your comments and suggestions in the talk-back area below.

So what’s the bottom line on Linux Mint? Actually, I like it a lot! So much so that I just might decide to blow away my main desktop’s long-standing Ubuntu OS in favor of a tasty new Linux Mint alternative.