Browse the extensive Rooted Kindle Fire screenshot tour using the index below. For the full story behind these screenshots, read our detailed article on Rooting and Tweaking the Kindle Fire.

These screenshots showcase the Kindle Fire’s standard homescreens and settings, the tools and process we used for rooting and tweaking it, and the overall end result. The list below offers quick access to screenshots by category. Click the screenshot thumbnails for larger images.

These screenshots show the normal process of setting up a Kindle Fire for use, and what its default homescreens look like prior to filling it up with apps and content. At this point it’s locked into Amazon’s Android apps market and has the look-and-feel of a bookcase, where apps, books, videos, songs, and documents reside — all represented by fairly large icons…

Rooting and more with the Kindle Fire Utility

The Kindle Fire Utility makes it relatively easy to install the TWRP (Team Win Recovery Project) replacement bootloader and maintenance utility, root the device, and deploy a core set of Google services and apps. The final screenshot of this set shows the Android Composite ADB Interface driver, which is installed by KFU.

The two sets of screenshots below show the functions provided by the TWRP and CWMR recovery tools, which are installed via KFU…

This group of screenshots shows the activation of Google Services on the rooted Kindle Fire. Once the services are deployed and apps are installed from Google’s Android apps market, you can activate syncing of Google’s cloud services to the device using the Google Sync app as shown in the final image of this group…

These screenshots show basic operation of Google’s Android apps suite on the Kindle Fire, once they’ve been installed using the Google Android apps market (via the “Google Play” app), and synced to the device via the Google Sync app… 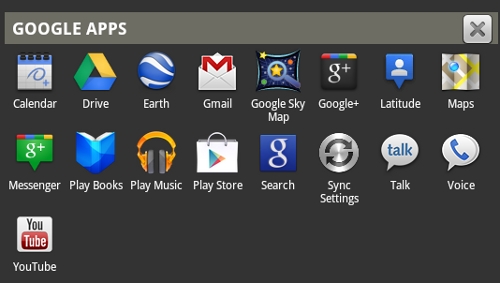 This set of screenshots shows some utilities, obtained from Google’s Android apps market, which are useful for tweaking the device’s homescreens and operation…

Hacker’s Keyboard (info) — a powerful alternative to the standard Kindle Fire keyboard; once installed, you can easily select either keyboard (refer to the full article for installation notes)…

Next we replace the Kindle Fire’s bookshelf-style homescreen launcher with Go Launcher EX, a more typical Android launcher. Not shown, is the process of substituting a custom homescreen background (to be discussed in the review)…

Organizing apps and bookmarks into folders

Now, we use Folder Organizer to place apps and folders containing apps and bookmarks on the Kindle Fire’s homescreens. These screenshots show the resulting folders, following the installation of lots more apps…

And here’s the finished set of homescreens. The first three screenshots show three views of the main homescreen, which appears whenever you press the home icon. The second three show the alternate screens that are accessed via the “app drawer” icon (pictured at the right), which is located on the lower- or upper-right corner of the main homescreen (depending on whether it’s in portrait or landscape mode)…

Here, we showcase a handful of the more-than-150 apps that now reside on our souped-up Kindle Fire…

These screenshots show various other system settings functions. The system status screens reflect the condition of the device following the installation of about 150 apps from both the Amazon and Google Android apps markets…

For the full story behind these screenshots, read our detailed article on Rooting and Tweaking the Kindle Fire.