Streaming Netflix on the Galaxy Tab 10.1

Until recently, the official Netflix Android app supported all Android 2.2 and 2.3 devices, including both smartphones and tablets. But what about Android 3.x (Honeycomb) tablets, like the Galaxy Tab 10.1?

Latest update; Oct. 20, 2011: Netflix has just released a new version of its video-streaming app for Android devices that officially adds support for Android 3.x (Honeycomb) tablets. The October 19 release of Netflix app v1.5.0 build 360 also extends Netflix’s Android support to Canada and Latin America for the first time. Further details are in this DeviceGuru post (and yes, it works on our Galaxy Tab 10.1).

This post initially provided information on how to sideload the Netflix apk on the Galaxy Tab 10.1. However, we’ve confirmed that Version 1.4.1 build 262 (dated Sept. 22, 2011) of the Netflix app installs directly from the Android App Market and runs on DeviceGuru’s Galaxy Tab 10.1 without any problems.

The following screenshot shows the Netflix app details as displayed by the Android Market app on the Galaxy Tab 10.1, following the app’s installation on DeviceGuru’s tablet: 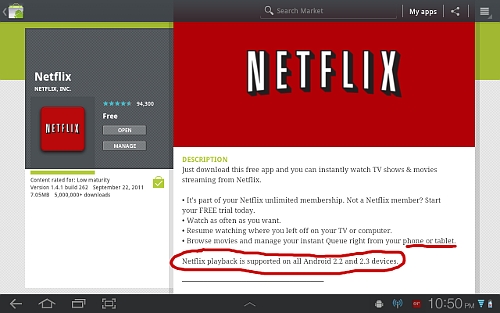 
One additional observation: the Android Netflix app (and also the one that’s currently available on the iPad 2, incidentally) doesn’t have the UI sophistication and polish of the version that runs on our Boxee Box (which, by the way, is now rock-solid). It can be expected to evolve, though, as suggested by Netflix’s device app development strategy.

Let us know if you have any difficulties in the comments below.

The previous version of this post appears below. Hopefully, this process is no longer needed, but if you have any problems on your Galaxy Tab 10.1, give it a try and let us know how it goes in the comments below.

The July 20 update to the official Netflix Android app enabled users of most smartphones running Android 2.2 and 2.3 to watch Netflix videos on their devices. Although users of most Android 3.x tablets remain out in the cold, even after the September 9 update to the app, the steps outlined in this post should help Galaxy Tab 10.1 users get Netflix streaming up and running without having to root their tablets.

In the steps below, click each thumbnail image for a larger view…

Assuming everything went smoothly, you’ll have a working Netflix video streaming app on your Galaxy Tab 10.1.

34 responses to “Streaming Netflix on the Galaxy Tab 10.1”